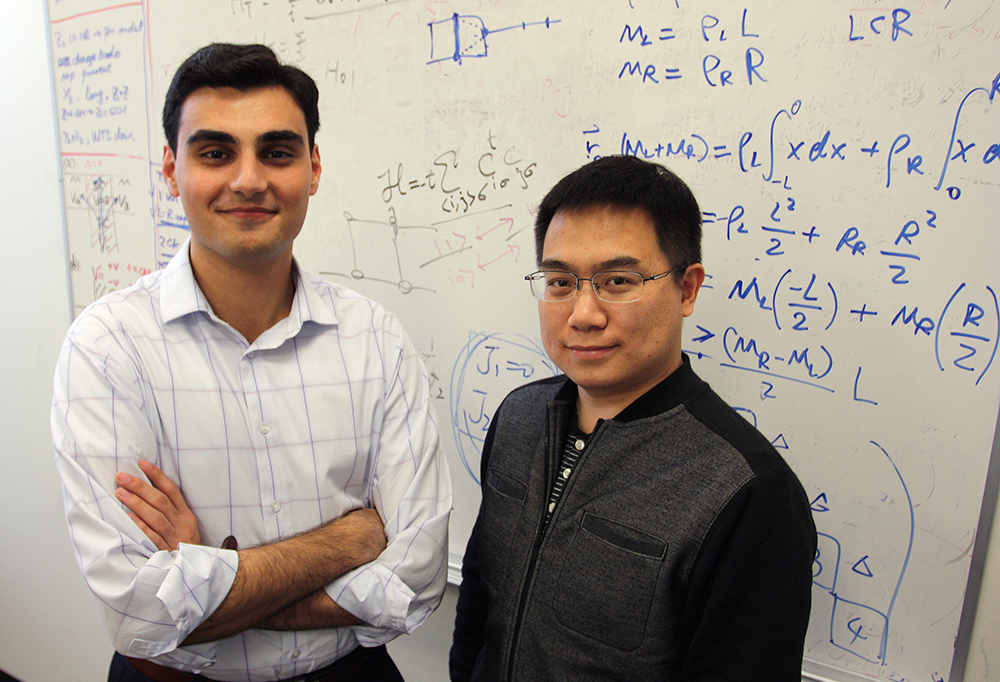 UT Dallas physicists have published new findings examining the electrical properties of materials that could be harnessed for next-generation transistors and electronics.

Dr. Fan Zhang, assistant professor of physics, and senior physics student Armin Khamoshi recently published their research on transition metal dichalcogenides, or TMDs, in the journal Nature Communications. Zhang is a co-corresponding author, and Khamoshi is a co-lead author of the paper, which also includes collaborating scientists at Hong Kong University of Science and Technology.

In recent years, scientists and engineers have become interested in TMDs in part because they are superior in many ways to graphene, a one-atom thick, two-dimensional sheet of carbon atoms arranged in a lattice. Since it was first isolated in 2004, graphene has been investigated for its potential to replace conventional semiconductors in transistors, shrinking them even further in size. Graphene is an exceptional conductor, a material in which electrons move easily, with high mobility.

“It was thought that graphene could be used in transistors, but in transistors, you need to be able to switch the electric current on and off,” Zhang said. “With graphene, however, the current cannot be easily switched off.”

In their search for alternatives, scientists and engineers have turned to TMDs, which also can be made into thin, two-dimensional sheets, or monolayers, just a few molecules thick.

“TMDs have something graphene does not have — an energy gap that allows the flow of electrons to be controlled, for the current to be switched on and off,” Khamoshi said. “This gap makes TMDs ideal for use in transistors. TMDs are also very good absorbers of circularly polarized light, so they could be used in detectors. For these reasons, these materials have become a very popular topic of research.”

One of the challenges is to optimize and increase electron mobility in TMD materials, a key factor if they are to be developed for use in transistors, Khamoshi said.

In their most recent project, Zhang and Khamoshi provided the theoretical work to guide the Hong Kong group on the layer-by-layer construction of a TMD device and on the use of magnetic fields to study how electrons travel through the device. Each monolayer of TMD is three molecules thick, and the layers were sandwiched between two sheets of boron nitride molecules.

“The behavior of electrons controls the behavior of these materials,” Zhang said. “We want to make use of highly mobile electrons, but it is very challenging. Our collaborators in Hong Kong made significant progress in that direction by devising a way to significantly increase electron mobility.”

The team discovered that how electrons behave in the TMDs depends on whether an even or odd number of TMD layers were used.

“This layer-dependent behavior is a very surprising finding,” Zhang said. “It doesn’t matter how many layers you have, but rather, whether there are an odd or even number of layers.”

Because the TMD materials operate on the scale of individual atoms and electrons, the researchers incorporated quantum physics into their theories and observations. Unlike classical physics, which describes the behavior of large-scale objects that we can see and touch, quantum physics governs the realm of very small particles, including electrons.

On the size scale of everyday electrical devices, electrons flowing through wires behave like a stream of particles. In the quantum world, however, electrons behave like waves, and the electrical transverse conductance of the two-dimensional material in the presence of a magnetic field is no longer like a stream — it changes in discrete steps, Zhang said. The phenomenon is called quantum Hall conductance.

“Quantum Hall conductance might change one step by one step, or two steps by two steps, and so on,” he said. “We found that if we used an even number of TMD layers in our device, there was a 12-step quantum conductance. If we applied a strong enough magnetic field to it, it would change by six steps at a time.”

Using an odd number of layers combined with a low magnetic field also resulted in a 6-step quantum Hall conductance in the TMDs, but under stronger magnetic fields, it became a 3-step by 3-step phenomenon.

“The type of quantum Hall conductance we predicted and observed in our TMD devices has never been found in any other material,” Zhang said. “These results not only decipher the intrinsic properties of TMD materials, but also demonstrate that we achieved high electron mobility in the devices. This gives us hope that we can one day use TMDs for transistors.”

As a senior at Hillcrest High School in Dallas, Armin Khamoshi earned so many Advanced Placement credits in science and math that he started his freshman year at UT Dallas by taking upper-level physics classes.

By his second year on campus, the physics and math major had finished all the primary courses of the University’s physics curriculum, and started taking graduate-level quantum mechanics classes in his junior year.

With so much coursework under his belt, he was ready to begin research. Khamoshi has earned three Undergraduate Research Scholar Awards, which allow students to conduct research with faculty mentors. Two of those awards supported his work with Dr. Fan Zhang, assistant professor of physics, and resulted in Khamoshi publishing an article in Nature Communications and giving an invited talk at the Gulf Coast Research Symposium at Rice University.

“The classes I have taken at UT Dallas provided me with the knowledge I needed to do research,” Khamoshi said.

Some of his research, detailing the physics underlying a potential new MRI technology, was published in the Spring 2016 issue of The Exley, the UT Dallas undergraduate research journal. Khamoshi was also a Green Fellow, a semester-long immersive research fellowship for select UT Dallas students who work with faculty mentors at UT Southwestern Medical Center.

Now a senior, Khamoshi is looking at graduate schools to pursue his PhD in physics and a possible career in academia.

“As an undergraduate, I was very ambitious,” he said. “It’s been a lot of hard work, with very few breaks. I have had a good education at UT Dallas, and I consider myself to be very fortunate to have landed here.”