The wind over deep-sea waters offers the potential to become one of the country’s largest renewable energy sources. 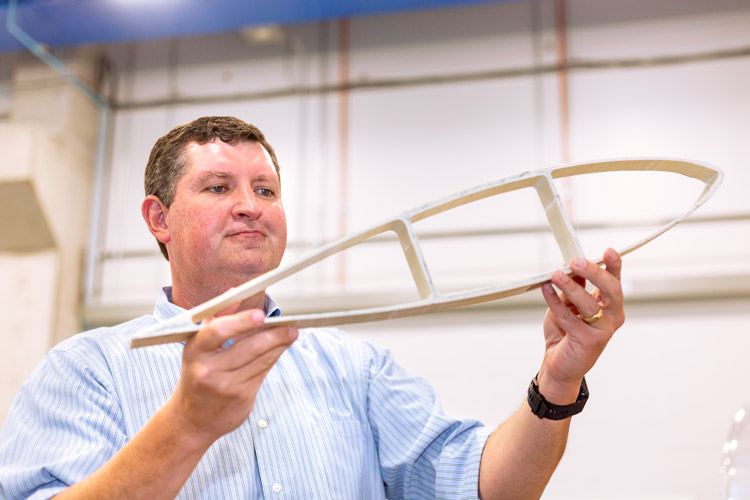 Dr. Todd Griffith, associate professor of mechanical engineering, demonstrates his blade design for an offshore floating wind turbine. Griffith is leading a team of UT Dallas researchers and collaborators to build a prototype for the turbine.

University of Texas at Dallas researcher Dr. Todd Griffith has spent years working on an offshore turbine design that can convert those deep-ocean winds into electricity. Recently, Griffith received a $3.3 million grant from the U.S. Department of Energy to take his technology to the next level. The Advanced Research Projects Agency-Energy (ARPA-E) award provides support for his team to design and build a prototype for a floating offshore wind turbine.

The new grant was part of $26 million in funding from ARPA-E for 13 projects to accelerate floating offshore wind turbine technologies through the Aerodynamic Turbines, Lighter and Afloat, with Nautical Technologies and Integrated Servo-Control (ATLANTIS) program.

The Department of Energy estimates that state and federal waters along the U.S. coasts and the Great Lakes could generate twice the amount of energy generated by all of the nation’s electric power plants combined. One of the biggest barriers to harvesting that energy has been the high cost of deploying wind turbines in deeper water, where floating platforms are required. Griffith’s project aims to lower the cost and overcome challenges with installation and connecting to existing energy grids with underwater cables.

“A traditional turbine design is great for land, and it can make sense offshore in shallow waters, but when you build in deep water in the ocean, you need a totally new design,” said Griffith, associate professor of mechanical engineering in the Erik Jonsson School of Engineering and Computer Science. 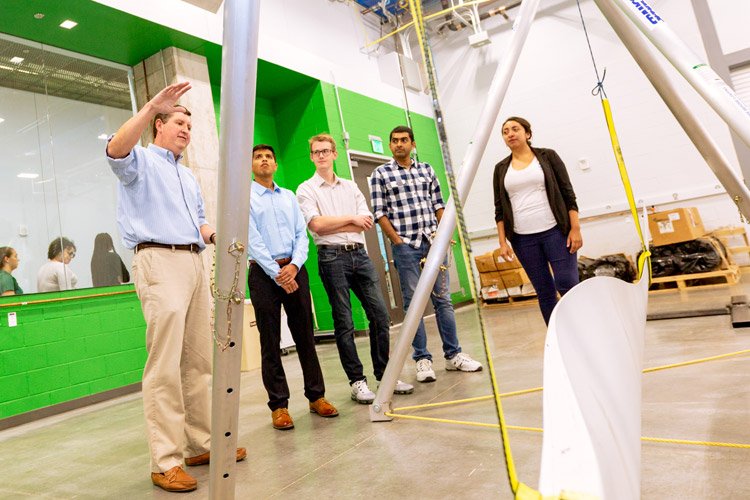 UT Dallas students are part of a team of researchers building a prototype of the turbine. Griffith (left) discusses the properties of a blade that will be used for a more traditional wind turbine design.

Griffith’s design is radically different from a traditional three-blade horizontal axis wind turbine. It is called a vertical axis wind turbine and has vertical blades and axis of rotation, rather than horizontal, and looks more like an upended eggbeater than a pinwheel. The platform, which is smaller than traditional platforms, sits partly above the ocean’s surface and partly below, like a ship. It is attached to the sea floor with cables rather than anchored directly to the sea floor under ocean depths of at least 200 feet. The generator and controls are on the platform, providing greater stability and facilitating easier maintenance.

The turbine blades would rise between 600 feet and 700 feet above the ocean’s surface but could reach as high as 900 feet. Griffith said the turbines would not obstruct ocean views because they would be at least 20 miles from the coast, past the horizon.

Griffith began investigating vertical axis wind turbine designs in 2009 when he was a principal member of the technical staff and offshore technical lead at Sandia National Laboratories’ Wind Energy Technologies Department. He joined UT Dallas in 2017.

Under the new grant, the UT Dallas team will include doctoral students, postdoctoral researchers and Dr. Mario Rotea, the Erik Jonsson Chair and head of mechanical engineering, who will lead the control systems thrust of the project. Through a process called control co-design, Rotea said he will work on developing the subsystems required to extract the most power with the least exertion of the turbine, which includes managing the forces on the blades and the turbine’s speed in changing weather conditions.

The research is critical to expanding the use of wind energy in the United States, especially in coastal areas, Rotea said. The nation’s only commercial offshore wind project, which came online in 2016, is the Block Island Wind Farm about 4 miles off the coast of Block Island, Rhode Island.

“A traditional turbine design is great for land, and it can make sense offshore in shallow waters, but when you build in deep water in the ocean, you need a totally new design.”

“To grow wind-energy capacity, we’ve got to make use of what’s available over water,” Rotea said. “The future will require growth of wind-energy capacity both on land and from the ocean, especially in regions that are close to large population centers, such as New York, Houston and others.”

UT Dallas researchers are working with the University of Illinois at Urbana-Champaign and corporate partners Aquanis Inc., VL Offshore and XFlow Energy. Griffith said the team approach was instrumental in winning the competitive grant.

“For me, this is an opportunity to do great research with a great multidisciplinary engineering team,” Griffith said. “We’re bringing together structural design, aerodynamics, control systems, floating systems, economics and installation procedures. It’s a true systems-level engineering problem. I’m just excited to be able to lead this incredible group to bring all this technology together to realize the vision of the ATLANTIS program.”

In another project funded by the Department of Energy, Griffith is designing a turbine to be used closer to the shore with blades longer than the length of two football fields. The two-blade, downwind-facing design was modeled after palm trees to withstand storms and high winds.

The grant to design and build a floating offshore wind turbine prototype is one of several UT Dallas research projects focused on advancing wind energy technology. UT Dallas researchers are also a partner in a separate ARPA-E project to develop new technology to increase the power output of wind turbines without increasing the mechanical loads. Much of the University’s wind-energy research falls under the National Science Foundation-funded Wind Energy, Science, Technology and Research ( WindSTAR) Industry/University Cooperative Research Center.