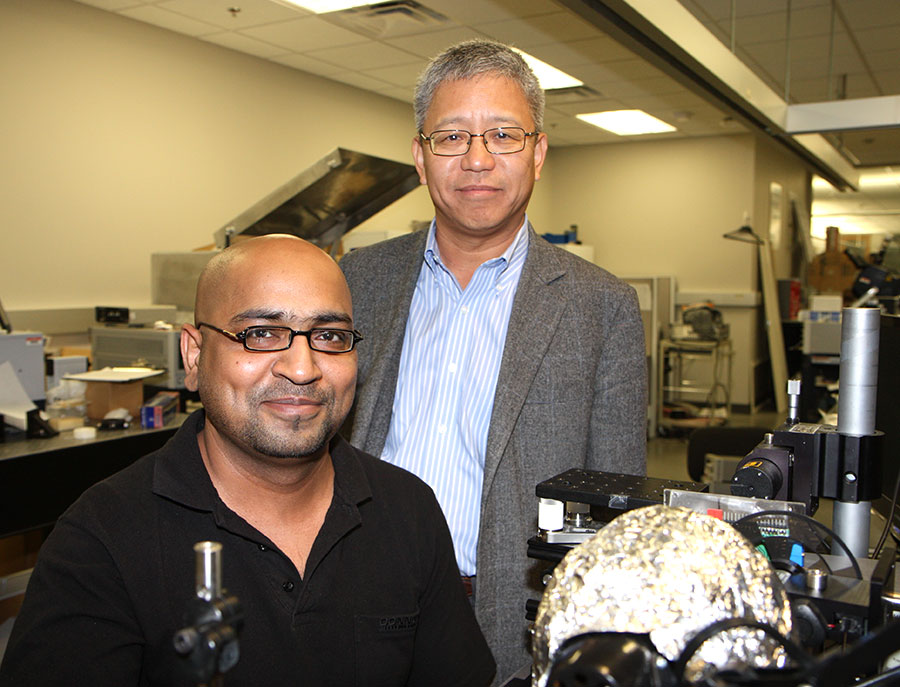 Engineers at The University of Texas at Dallas have created semiconductor technology that could make night vision and thermal imaging affordable for everyday use.

Researchers in the Texas Analog Center of Excellence (TxACE) in the University’s Erik Jonsson School of Engineering and Computer Science created an electronic device in affordable technology that detects electromagnetic waves to create images at nearly 10 terahertz, which is the highest frequency for electronic devices. The device could make night vision and heat-based imaging affordable.

Presently, night vision and thermal imagers are costly, in part because they are made with specialty semiconductor devices or need isolation from the environment.

The UT Dallas device is created using Schottky diodes in Complementary Metal-Oxide Semiconductor (CMOS) technology. CMOS is used to make affordable consumer electronic devices such as personal computers, game consoles and high-definition TVs. In addition to being affordable, these devices could be more easily incorporated into smartphones.

“There are no existing electronic detection systems operating in CMOS that can reach above 5 terahertz,” said Zeshan Ahmad, lead author of the work, electrical engineering doctoral candidate and a research assistant in TxACE. “We designed our chip in such a way that it can be mass produced inexpensively, has a smaller pixel and operates at higher frequencies.”

“This is a truly remarkable accomplishment. Twenty years ago, we were struggling to build CMOS circuits operating at 1 gigahertz. Now we are building circuits working at frequencies that are 10,000 times higher.”

Dr. Kenneth O, professor of electrical engineering in the Jonsson School and director of TxACE, noted the time it took for the field to reach this frequency in CMOS.

“This is a truly remarkable accomplishment,” said Dr. O, holder of the Texas Instruments Distinguished Chair. “Twenty years ago, we were struggling to build CMOS circuits operating at 1 gigahertz. Now we are building circuits working at frequencies that are 10,000 times higher.”

The device could eventually be used for imaging animals near a road while driving at night; imaging intruders in darkness; providing light for night hiking; and estimating how many people are in a room to better control heating, air conditioning and light. It also could be used for other tasks such as finding pipes covered by concrete or walls.

“This technology could provide a very superior means to use the infrared portion of the spectrum,” said Dr. Robert Doering, research strategy manager at Texas Instruments. “Electronic control of generating infrared directly from CMOS integrated circuits will enable a wide variety of important new applications.”

The next step in the research is to realize CMOS devices that can reach even higher frequencies, up to 40 terahertz.

The work was conducted in collaboration with researchers from Goethe University Frankfurt and Vilnius University in Lithuania.

The research was presented in December at the International Electron Device Meeting, the forum for the latest and most significant innovations in semiconductor technology.

The work was supported by TxACE, which is funded by the Semiconductor Research Corporation, the state through its Texas Emerging Technology Fund, Texas Instruments Inc., the UT System and UT Dallas.