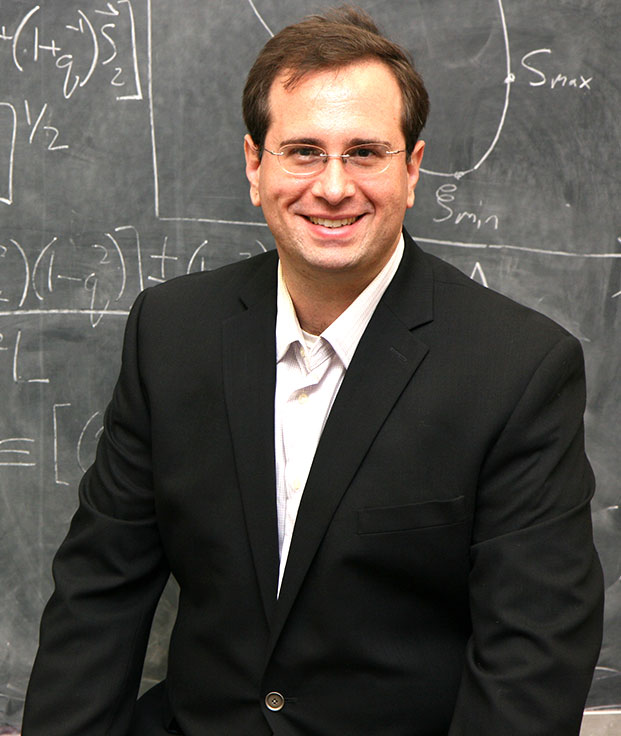 Dr. Michael Kesden, assistant professor of physics, said the research should significantly impact not only the study of black holes, but also the search for gravitational waves in the cosmos.

New research by a UT Dallas astrophysicist provides revelations about the most energetic event in the universe — the merging of two spinning, orbiting black holes into a much larger black hole.

The work by Dr. Michael Kesden, assistant professor of physics at UT Dallas, and his colleagues provides for the first time solutions to decades-old equations that describe conditions as two black holes in a binary system orbit each other and spiral in toward a collision.

The research is available online and in the Feb. 27 issue of the journal Physical Review Letters.

Kesden said the solutions should significantly impact not only the study of black holes, but also the search for gravitational waves in the cosmos. Albert Einstein’s general theory of relativity predicts that two massive objects orbiting in a binary system should move closer together as the system emits a type of radiation called gravitational waves.

“An accelerating charge, like an electron, produces electromagnetic radiation, including visible light waves. Similarly, any time you have an accelerating mass, you can produce gravitational waves,” Kesden said.

“The energy lost to gravitational waves causes the black holes to spiral closer and closer together until they merge, which is the most energetic event in the universe,” he said. “That energy, rather than going out as visible light, which is easy to see, goes out as gravitational waves, which are very weak and much more difficult to detect.”

“With these solutions, we can create computer simulations that follow black hole evolution over billions of years. A simulation that previously would have taken years can now be done in seconds. But it’s not just faster — there are things that we can learn from these simulations that we just couldn’t learn any other way.”

Optical telescopes can capture photos of visible objects, such as stars and planets, and radio and infrared telescopes can reveal additional information about invisible energetic events. Gravitational waves would provide yet another medium through which to examine astrophysical phenomena, Kesden said.

“Using gravitational waves as an observational tool, you could learn about the characteristics of the black holes that were emitting those waves billions of years ago, information such as their masses and mass ratios,” he said. “That’s important data for more fully understanding the evolution and nature of the universe.”

This year, a large-scale physics experiment called the Laser Interferometer Gravitational-Wave Observatory (LIGO) aims to be the first to directly detect gravitational waves. LIGO is one of the largest projects funded by the National Science Foundation.

“The equations that we solved will help predict the characteristics of the gravitational waves that LIGO would expect to see from binary black hole mergers,” Kesden said. “We’re looking forward to comparing our solutions to the data that LIGO collects.”

The equations Kesden solved deal specifically with the spin angular momentum of binary black holes and a phenomenon called precession.

In an astrophysical setting like a binary black hole system, the directions of the individual types of angular momenta change, or precess, over time.

“In these systems, you have three angular momenta, all changing direction with respect to the plane of the orbit — the two spin angular momenta and the one orbital angular momentum,” Kesden said. “The solutions that we now have describe the orientations of the precessing black hole spins.”

“We can do it millions of times faster than was previously possible,” he said. “With these solutions, we can create computer simulations that follow black hole evolution over billions of years. A simulation that previously would have taken years can now be done in seconds. But it’s not just faster. There are things that we can learn from these simulations that we just couldn’t learn any other way.”

Researchers from the University of Cambridge, the Rochester Institute of Technology and the University of Mississippi also contributed to the Physical Review Letters paper. The researchers were supported in part by the National Science Foundation and UT Dallas. 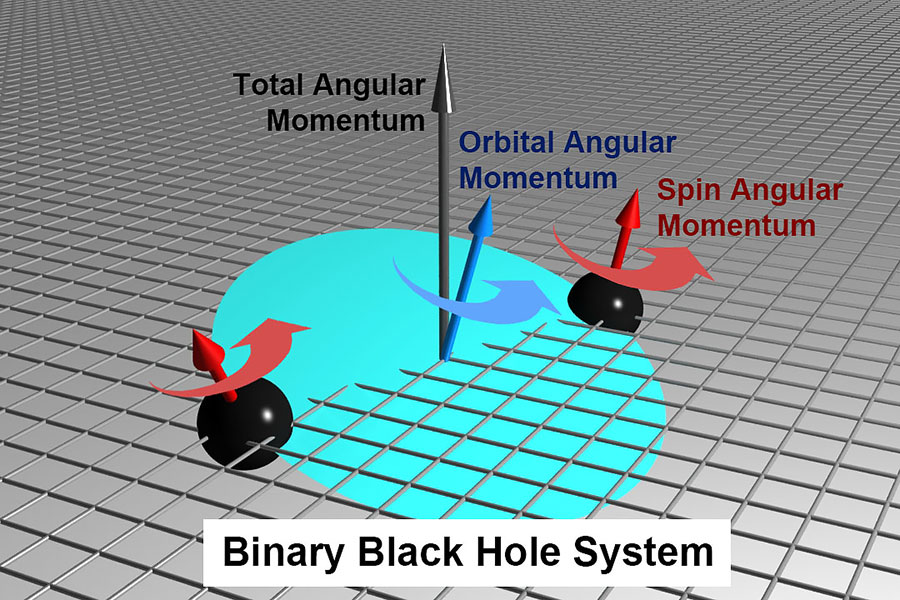 Kesden is one of 126 U.S. and Canadian researchers to receive the honor, which recognizes early career scientists whose achievements and potential identify them as rising stars among the next generation of scientific leaders.

“For more than 50 years, the Sloan Foundation has been proud to celebrate the achievements of extraordinary young scientists who are pushing the boundaries of scientific knowledge,” said Dr. Paul L. Joskow, president of the Alfred P. Sloan Foundation.

“Although interesting science results are rewards in themselves, it also is extremely gratifying to know that your work is being appreciated by others,” Kesden said.

Kesden earned his undergraduate degree from Princeton University and his PhD from the California Institute of Technology, both in physics. He was the James Arthur Postdoctoral Fellow at New York University before joining the UT Dallas faculty in 2013.

“We are quite proud of Michael and held high expectations when hiring him,” said Dr. Bruce Novak, dean of the School of Natural Sciences and Mathematics and recipient of a Sloan Research Fellowship in 1991. “Receipt of a Sloan Fellowship is external validation of the high-caliber faculty we continue to attract to our science departments and to UT Dallas. This honor is a well-deserved recognition of Michael’s talents and potential.”