National Institutes of Health May Have to Shift Focus, Writer Says 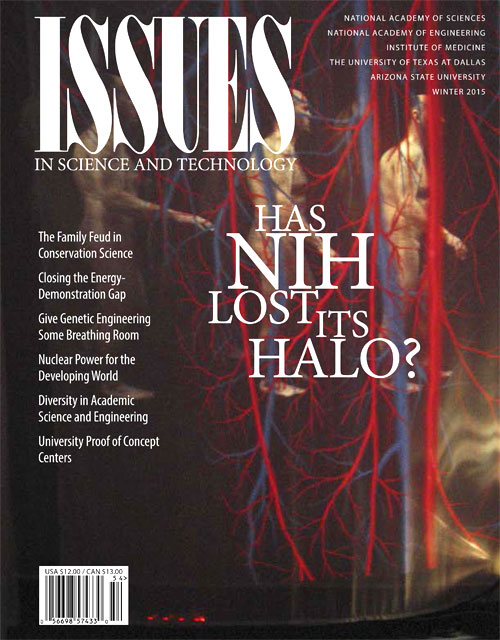 The six-decade commitment between Congress and the National Institutes of Health (NIH) might be coming to an end, according to an article by Duke University public policy professor Robert Cook-Deegan in the winter edition of Issues in Science and Technology.

After doubling the NIH budget between 1998 and 2003, Congress has tightened its purse strings, and NIH has seen its budget shrink. NIH has thrived through its emphasis on attacking high-profile diseases such as cancer, stroke and diabetes, but Cook-Deegan argues that it might be time for the agency to rethink its priorities and pay more attention to less glamorous concerns such as health services and prevention.

Also in the winter 2015 issue, science journalist Keith Kloor explores a contentious rift between scientists concerned with the protection of the natural world.

The traditional view has been focused on the need to protect nature from human intervention, but an influential group of scientists now sees this strategy as unwise and unworkable. They argue that nature has always been in flux and that humans are an integral part of the natural world. Instead of trying to put fences around human-free preserves, they propose looking for ways to maintain the health and diversity of the natural world in a way that is integrated with human activities.

Other articles look at how outdated federal regulatory policies are creating a barrier to new approaches to biotechnology that are more precise, reliable and effective; how universities are developing new strategies for helping their faculty develop their research breakthroughs into practical new products that can contribute to economic growth and productivity; and how our educational system can do more to expand the participation of women and under-represented minorities in science and engineering.