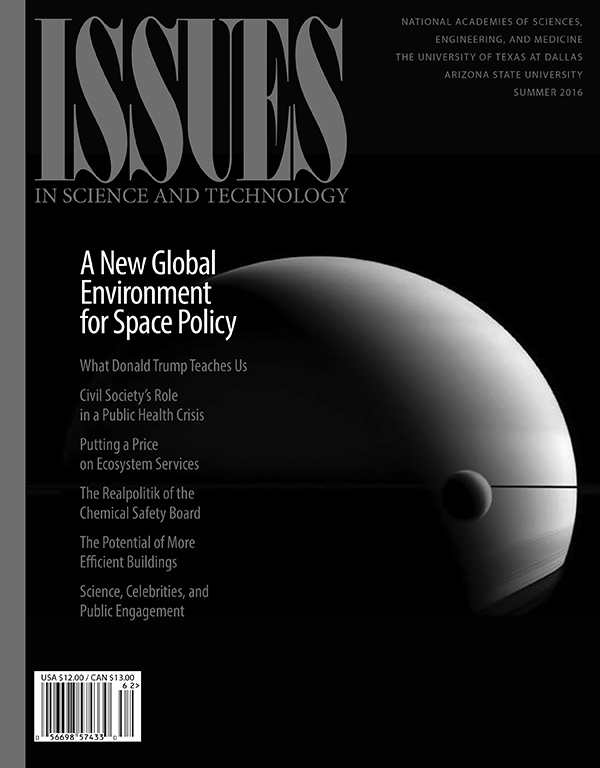 The summer edition of Issues in Science and Technology focuses on the changing landscape of space policy.

Dr. Bhavya Lal, a researcher at the Science and Technology Policy Institute, explores how more countries and private companies are becoming active in space. Lal contends that the U.S. government must reshape its space agencies and policies if it wants to keep up. She writes that cooperation and synergistic partnerships among commercial and governmental entities will be key to this effort.

In his article “Donald Trump’s Voters and the Decline of American Manufacturing,” William B. Bonvillian analyzes the rise of the Republican presidential nominee through the lens of science and technology policy. Bonvillian, director of MIT’s Washington office, writes that the United States ignores the manufacturing sector at the expense of its innovation system and working-class communities, and that the political ramifications could be enormous.

Nor is this merely an issue for innovation policy. According to science policy journalist Colin Macilwain, scientists have taken public funds while failing to build bridges with the public; ignored societal problems that require political engagement in favor of technical problems; and supported the free-market interests of political and economic elites. Macilwain writes that the research community must accept its responsibility for civic engagement.

Other pieces in the summer issue include: