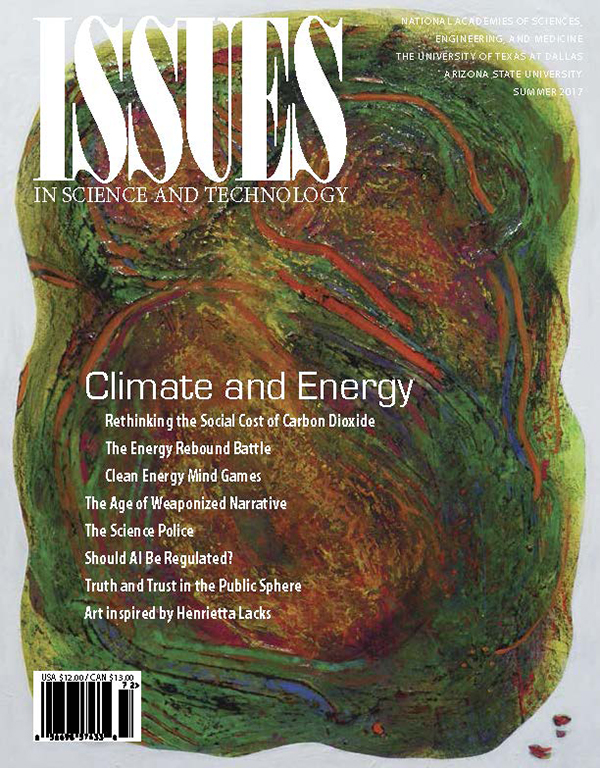 Dr. Granger Morgan, professor of engineering at Carnegie Mellon University, joins several other researchers who were pioneers in the application of benefit/cost analysis to climate and energy policy, in an article examining how this widely used tool can be ill-suited to the assessment of greenhouse gas.

In another feature, Ted Nordhaus, co-founder and research director at the Breakthrough Institute, explores why improvements in energy efficiency technology may not deliver the overall energy savings that they promise.

Author David Ropeik, an award-winning television reporter, delves into the complicated psychology underlying public opinion toward nuclear power. He concludes that it is the dynamics of group identification — not economics, safety, or climate concerns — that is the key factor in how people perceive the technology.

In a perspective piece titled “Should Artificial Intelligence (AI) Be Regulated?” sociologist Dr. Amitai Etzioni, founder and director of the Institute for Communitarian Policy Studies at George Washington University, and Dr. Oren Etzioni, chief executive officer of the Allen Institute for Artifical Intelligence and professor of computer science at the University of Washington, provide a context for understanding the progress of AI.

They distinguish between trends that are an extension of current activities and those, such as autonomous weapons, that deserve close attention because they are qualitatively different from what preceded them.

Dr. Braden Allenby, an environmental attorney and professor of civil and environmental engineering at Arizona State University, reviews the long history of information warfare and warns that new technology is enabling a capability in “weaponized narrative” that is more efficient, more insidious and more powerful than what has been managed before.

Also in this edition:

Issues in Science and Technology is the award-winning journal of the National Academies of Sciences, Engineering, and Medicine, The University of Texas at Dallas and Arizona State University.