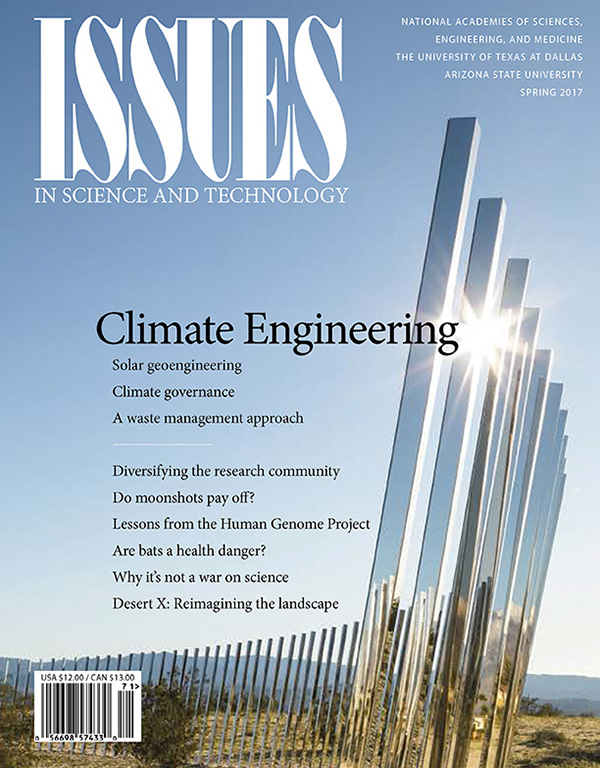 The spring edition of Issues in Science and Technology features a special editorial package on climate engineering. The authors of three articles offer solutions for preventing catastrophes including directly intervening in the climate.

In the first article, Dr. David Keith, a leading researcher in geoengineering with Harvard University, outlines a responsible research agenda for solar geoengineering.

In the second article, Dr. Jane C.S. Long, the former associate director for energy and environment at Lawrence Livermore National Laboratory, describes a systems approach to climate change, beginning with limiting greenhouse gas emissions and adapting to unavoidable climate disruptions, while researching the feasibility of geoengineering.

In the third article, Dr. Klaus Lackner with Arizona State University and Christophe Jospe, founder of Carbon A List, propose treating carbon dioxide emissions like other forms of waste. They write that direct carbon capture may offer a pragmatic way to remove greenhouse gases from the atmosphere.

Intervening in the climate system would be an unparalleled example of big science. In their article, Dr. David J. Galas, Dr. Aristides Patrinos and Dr. Charles DeLisi examine lessons offered by a previous effort that almost didn’t happen — the Human Genome Project (HGP). The authors all served central roles at the Department of Energy — the surprising birthplace for the project to map the human genome — during the initiation and operation of the HGP. They describe the need for a rigorous process to evaluate large-scale research proposals.

Dr. Walter D. Valdivia, senior fellow at the Consortium for Science, Policy & Outcomes, looks at scientific “moonshots” to assess the value of rapid increases in federal support for specific areas of research and development.

Also in this edition: