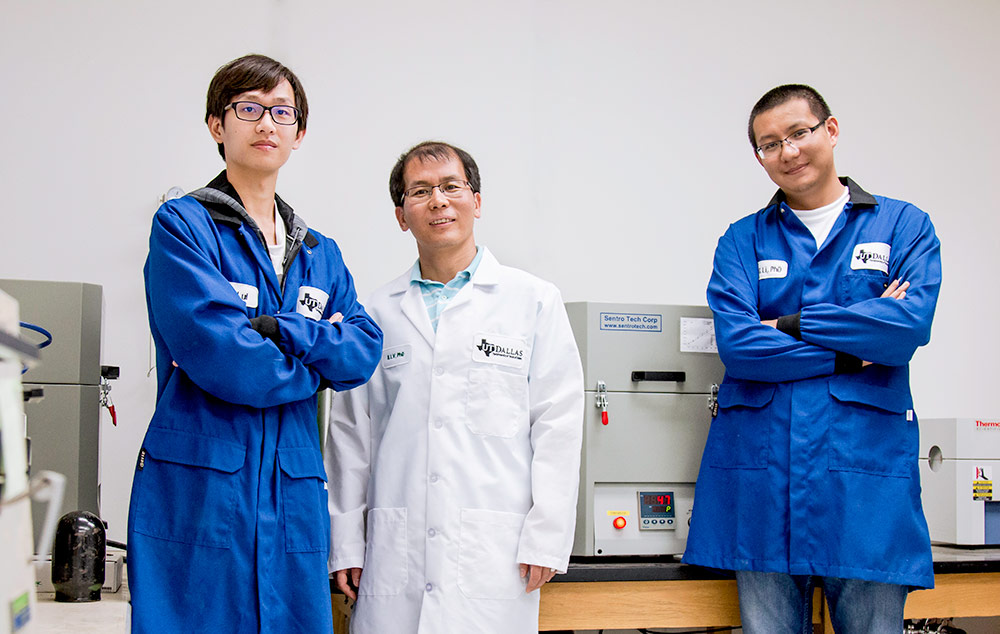 If your laptop or cellphone starts to feel warm after playing hours of video games or running too many apps at one time, those devices are actually doing their job.

Whisking heat away from the circuitry in a computer’s innards to the outside environment is critical: Overheated computer chips can make programs run slower or freeze, shut the device down altogether or cause permanent damage.

As consumers demand smaller, faster and more powerful electronic devices that draw more current and generate more heat, the issue of heat management is reaching a bottleneck. With current technology, there’s a limit to the amount of heat that can be dissipated from the inside out.

Dr. Bing Lv (pronounced “love”), assistant professor of physics in the School of Natural Sciences and Mathematics at UT Dallas, and his colleagues produced crystals of a semiconducting material called boron arsenide that have an extremely high thermal conductivity, a property that describes a material’s ability to transport heat. 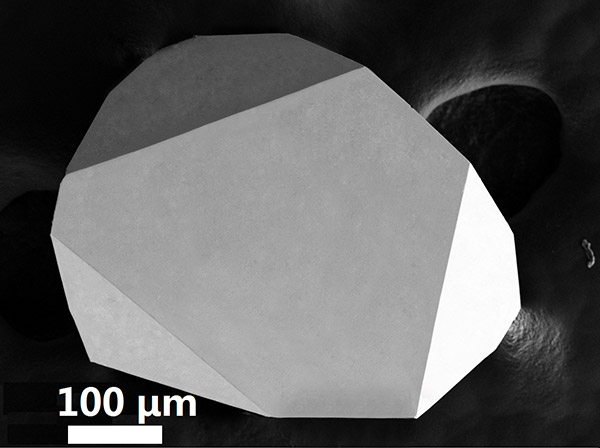 Researchers at UT Dallas and their collaborators have created and characterized tiny crystals of boron arsenide that have high thermal conductivity.

“Heat management is very important for industries that rely on computer chips and transistors,” said Lv, a corresponding author of the study. “For high-powered, small electronics, we cannot use metal to dissipate heat because metal can cause a short circuit. We cannot apply cooling fans because those take up space. What we need is an inexpensive semiconductor that also disperses a lot of heat.”

Most of today’s computer chips are made of the element silicon, a crystalline semiconducting material that does an adequate job of dissipating heat. But silicon, in combination with other cooling technology incorporated into devices, can handle only so much.

Diamond has the highest known thermal conductivity, around 2,200 watts per meter-kelvin, compared to about 150 watts per meter-kelvin for silicon. Although diamond has been incorporated occasionally in demanding heat-dissipation applications, the cost of natural diamonds and structural defects in man-made diamond films make the material impractical for widespread use in electronics, Lv said.

In 2013, researchers at Boston College and the Naval Research Laboratory published research that predicted boron arsenide could potentially perform as well as diamond as a heat spreader. In 2015, Lv and his colleagues at the University of Houston successfully produced such boron arsenide crystals, but the material had a fairly low thermal conductivity, around 200 watts per meter-kelvin.

Since then, Lv’s work at UT Dallas has focused on optimizing the crystal-growing process to boost the material’s performance.

“We have been working on this research for the last three years, and now have gotten the thermal conductivity up to about 1,000 watts per meter-kelvin, which is second only to diamond in bulk materials,” Lv said.

Lv worked with postdoctoral research associate Dr. Sheng Li, co-lead author of the study, and physics doctoral student Xiaoyuan Liu, also a study author, to create the high thermal conductivity crystals using a technique called chemical vapor transport. The raw materials — the elements boron and arsenic — are placed in a chamber that is hot on one end and cold on the other. Inside the chamber, another chemical transports the boron and arsenic from the hot end to the cooler end, where the elements combine to form crystals.

Dr. David Cahill and Dr. Pinshane Huang’s research groups at the University of Illinois at Urbana-Champaign played a key role in the current work, studying defects in the boron arsenide crystals by state-of-the-art electron microscopy and measuring the thermal conductivity of the very small crystals produced at UT Dallas.

“We measure the thermal conductivity using a method developed at Illinois over the past dozen years called ‘time-domain thermoreflectance’ or TDTR,” said Cahill, professor and head of the Department of Materials Science and Engineering and a corresponding author of the study. “TDTR enables us to measure the thermal conductivity of almost any material over a wide range of conditions and was essential for the success of this work.”

The way heat is dissipated in boron arsenide and other crystals is linked to the vibrations of the material. As the crystal vibrates, the motion creates packets of energy called phonons, which can be thought of as quasiparticles carrying heat. Lv said the unique features of boron arsenide crystals — including the mass difference between the boron and arsenic atoms — contribute to the ability of the phonons to travel more efficiently away from the crystals.

Lv said that while the element arsenic by itself can be toxic to humans, once it is incorporated into a compound like boron arsenide, the material becomes very stable and nontoxic.

The next step in the work will include trying other processes to improve the growth and properties of this material for large-scale applications, Lv said.

The research was supported by the Office of Naval Research and the Air Force Office of Scientific Research.