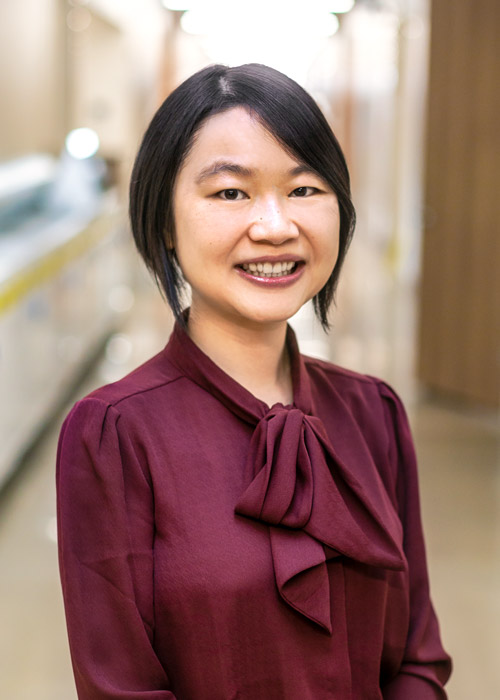 Gu’s research in the Erik Jonsson School of Engineering and Computer Science focuses on developing on-chip lasers for microchips that use light instead of electricity to transport data on the chips. Such photonic integrated circuits would help facilitate faster and more efficient data transfer, but they need an on-chip light source. These on-chip lasers can also have applications in bio- and chemical-sensing.

Gu’s CAREER award supports her research on using a relatively new class of solution-processed material called perovskite as the gain medium, which amplifies a laser beam. The first perovskite laser was demonstrated in 2014, and the technology is still several steps removed from being energy-efficient and viable for commercial applications.

“In its current form, there is a lot of wasted energy used to make the perovskite laser work. We would like to inject electrical current into it to make it more efficient and perhaps enable it to be used in manufacturing applications.”

Dr. Qing Gu, assistant professor of electrical and computer engineering in the Erik Jonsson School of Engineering and Computer Science

A perovskite is any compound with a calcium titanium oxide crystal structure. In addition to lasers, perovskites have potential use in generating and storing solar energy.

To operate, perovskite lasers currently require assistance from bulky, optically pumped lasers. In this case, optical pumping uses light to excite electrons from a lower energy level in an atom or molecule to a higher one.

“In its current form, there is a lot of wasted energy used to make the perovskite laser work,” Gu said. “We would like to inject electrical current into it to make it more efficient and perhaps enable it to be used in manufacturing applications.”

Injecting current into a perovskite laser to boost efficiency is a method that hasn’t been previously reported, Gu said.

The Faculty Early Career Development Program supports early-career faculty who exemplify the role of teacher-scholars through outstanding research and excellent education. The highly selective program is the National Science Foundation’s most prestigious award for junior faculty who are considered likely to become leaders in their fields.

“These particular perovskites are relatively new synthesized materials. They were first used to construct solar cells, and when researchers found out their many excellent optoelectronic properties, they found more applications in LEDs and lasers,” Gu said. “It also helps that these materials are easily processed and very inexpensive.”

Gu is collaborating on the project with other UT Dallas faculty members, including Dr. Anvar Zakhidov, professor of physics, and Dr. Wenchuang (Walter) Hu, professor of electrical engineering.