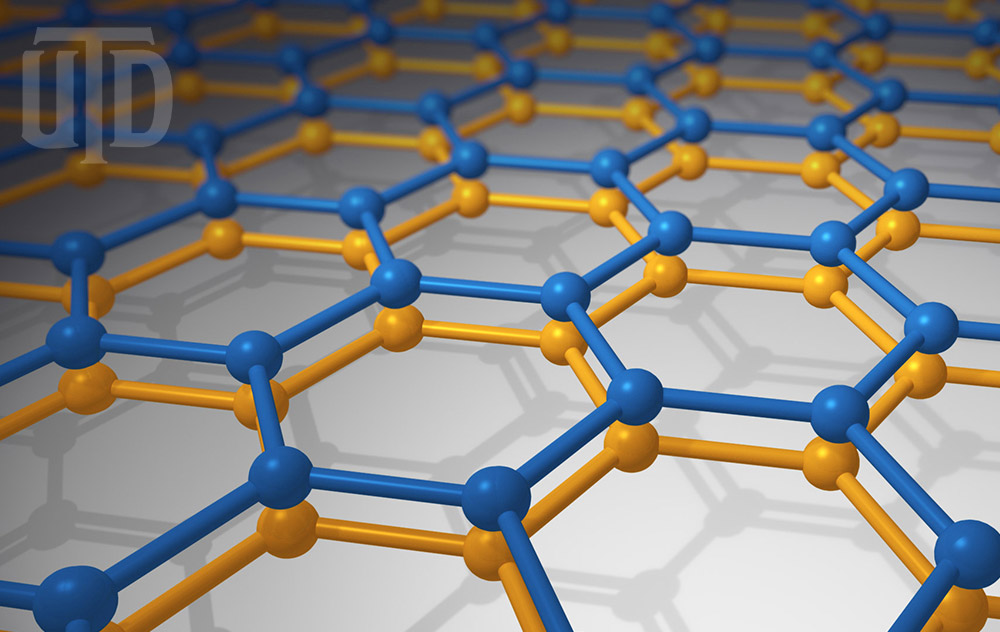 Graphene is a single layer of carbon atoms arranged in a flat honeycomb pattern, where each hexagon is formed by six carbon atoms at its vertices. UT Dallas physicists are studying the electrical properties that emerge when two layers of graphene are stacked.

A material composed of two one-atom-thick layers of carbon has grabbed the attention of physicists worldwide for its intriguing — and potentially exploitable — conductive properties.

Dr. Fan Zhang, assistant professor of physics in the School of Natural Sciences and Mathematics at The University of Texas at Dallas, and physics doctoral student Qiyue Wang published an article in June with Dr. Fengnian Xia’s group at Yale University in Nature Photonics that describes how the ability of twisted bilayer graphene to conduct electrical current changes in response to mid-infrared light.

From One to Two Layers

Graphene is a single layer of carbon atoms arranged in a flat honeycomb pattern, where each hexagon is formed by six carbon atoms at its vertices. Since graphene’s first isolation in 2004, its unique properties have been intensely studied by scientists for potential use in advanced computers, materials and devices.

If two sheets of graphene are stacked on top of one another, and one layer is rotated so that the layers are slightly out of alignment, the resulting physical configuration, called twisted bilayer graphene, yields electronic properties that differ significantly from those exhibited by a single layer alone or by two aligned layers.

“Graphene has been of interest for about 15 years,” Zhang said. “A single layer is interesting to study, but if we have two layers, their interaction should render much richer and more interesting physics. This is why we want to study bilayer graphene systems.”

When the graphene layers are misaligned, a new periodic design in the mesh emerges, called a moiré pattern. The moiré pattern is also a hexagon, but it can be made up of more than 10,000 carbon atoms.

This animation shows what happens when two stacked graphene layers are misaligned by a small amount called a twist angle. A new periodic design in the mesh emerges, called a moiré pattern. UT Dallas physicists are investigating how the twist angle affects the electronic properties of such twisted bilayer graphene. If you don’t see the video, watch it on YouTube.

“The angle at which the two layers of graphene are misaligned — the twist angle — is critically important to the material’s electronic properties,” Wang said. “The smaller the twist angle, the larger the moiré periodicity.”

The unusual effects of specific twist angles on electron behavior were first proposed in a 2011 article by Dr. Allan MacDonald, professor of physics at UT Austin, and Dr. Rafi Bistritzer. Zhang witnessed the birth of this field as a doctoral student in MacDonald’s group.

“At that time, others really paid no attention to the theory, but now it has become arguably the hottest topic in physics,” Zhang said.

In that 2011 research, MacDonald and Bistritzer predicted that electrons’ kinetic energy can vanish in a graphene bilayer misaligned by the so-called “magic angle” of 1.1 degrees. In 2018, researchers at the Massachusetts Institute of Technology proved this theory, finding that offsetting two graphene layers by 1.1 degrees produced a two-dimensional superconductor, a material that conducts electrical current with no resistance and no energy loss.

In a 2019 article in Science Advances, Zhang and Wang, together with Dr. Jeanie Lau’s group at The Ohio State University, showed that when offset by 0.93 degrees, twisted bilayer graphene exhibits both superconducting and insulating states, thereby widening the magic angle significantly.

“In our previous work, we saw superconductivity as well as insulation. That’s what’s making the study of twisted bilayer graphene such a hot field — superconductivity. The fact that you can manipulate pure carbon to superconduct is amazing and unprecedented,” Wang said.

In his most recent research in Nature Photonics, Zhang and his collaborators at Yale investigated whether and how twisted bilayer graphene interacts with mid-infrared light, which humans can’t see but can detect as heat.

“Interactions between light and matter are useful in many devices — for example, converting sunlight into electrical power,” Wang said. “Almost every object emits infrared light, including people, and this light can be detected with devices.”

Zhang is a theoretical physicist, so he and Wang set out to determine how mid-infrared light might affect the conductance of electrons in twisted bilayer graphene. Their work involved calculating the light absorption based on the moiré pattern’s band structure, a concept that determines how electrons move in a material quantum mechanically. 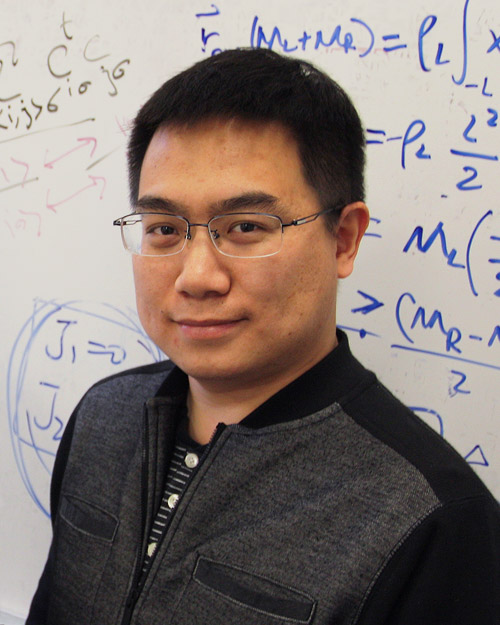 “Graphene has been of interest for about 15 years. A single layer is interesting to study, but if we have two layers, their interaction should render much richer and more interesting physics. This is why we want to study bilayer graphene systems.”

Dr. Fan Zhang, assistant professor of physics in the School of Natural Sciences and Mathematics

“There are standard ways to calculate the band structure and light absorption in a regular crystal, but this is an artificial crystal, so we had to come up with a new method,” Wang said. Using resources of the Texas Advanced Computing Center, a supercomputer facility on the UT Austin campus, Wang calculated the band structure and showed how the material absorbs light.

The Yale group fabricated devices and ran experiments showing that the mid-infrared photoresponse — the increase in conductance due to the light shining — was unusually strong and largest at the twist angle of 1.8 degrees. The strong photoresponse vanished for a twist angle less than 0.5 degrees.

“Our theoretical results not only matched well with the experimental findings, but also pointed to a mechanism that is fundamentally connected to the period of moiré pattern, which itself is connected to the twist angle between the two graphene layers,” Zhang said.

“The twist angle is clearly very important in determining the properties of twisted bilayer graphene,” Zhang added. “The question arises: Can we apply this to tune other two-dimensional materials to get unprecedented features? Also, can we combine the photoresponse and the superconductivity in twisted bilayer graphene? For example, can shining a light induce or somehow modulate superconductivity? That will be very interesting to study.”

Dr. Joe Qiu, program manager for solid-state electronics and electromagnetics at the U.S. Army Research Office (ARO), an element of the U.S. Army Combat Capabilities Development Command Army Research Laboratory, said, “This new breakthrough will potentially enable a new class of infrared detectors based on graphene with high sensitivity. These new detectors will potentially impact applications such as night vision, which is of critical importance for the U.S. Army.”

In addition to the Yale researchers, other authors included scientists from the National Institute for Materials Science in Japan. The ARO, the National Science Foundation and the Office of Naval Research supported the study.