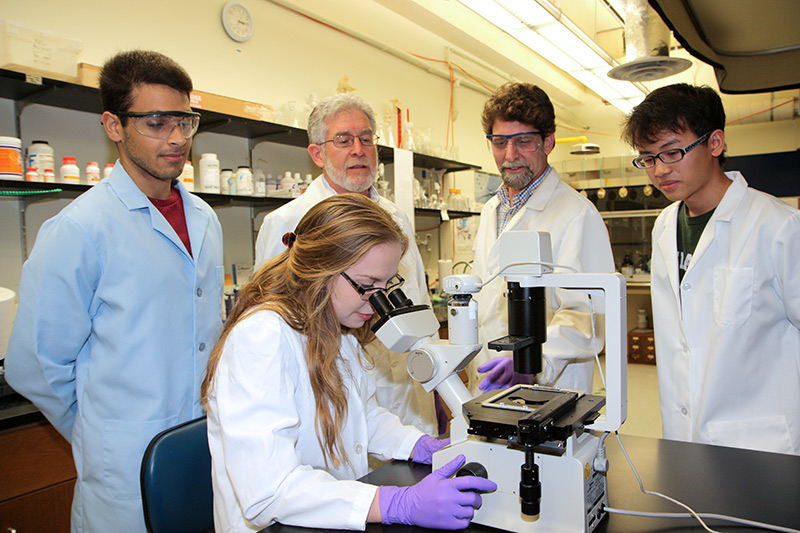 Dr. Paul Pantano (center right) and Dr. Rockford Draper have received a grant to study the possible risks that carbon nanotubes pose to health. (Left to right) Students Ali Tejani, Lizaveta Miadzvedskaya, and Michael Lee are among the undergraduates working on the research.

Scientists at The University of Texas at Dallas have received a federal grant to investigate how tiny carbon structures used in the manufacture of many everyday products might affect human health.

The grant is an Academic Research Enhancement Award (AREA), and an important part of this type of grant is supporting undergraduate researchers. It is the second AREA grant that Pantano, Draper and their research team have received. Students will work on the project alongside faculty members, graduate students and lab personnel, including biology research associate Dr. Carole Mikoryak and chemistry research scientist Dr. Ruhung Wang.

“We have had some outstanding undergraduates supported by our previous AREA grant who have made significant contributions to our research, enough to earn co-authorship on scientific papers,” Pantano said. “That’s a whole step up from a senior thesis. These students have gone on to medical school, the NIH and prestigious graduate research universities. The new NIH AREA grant will allow us to continue to support the best and the brightest student researchers.”

Carbon nanotubes are minute hollow cylinders formed from one-atom-thick sheets of carbon. Multi-walled carbon nanotubes consist of more than one such cylinder nested together, one inside another, like Russian nesting dolls.

Multi-walled carbon nanotubes are very strong and have physical and electrical properties that make them desirable for use in a variety of applications.

“They’re often used in materials to enhance structures and make them stronger, ranging from tennis rackets and bicycle parts to structural components in airplanes,” Draper said. 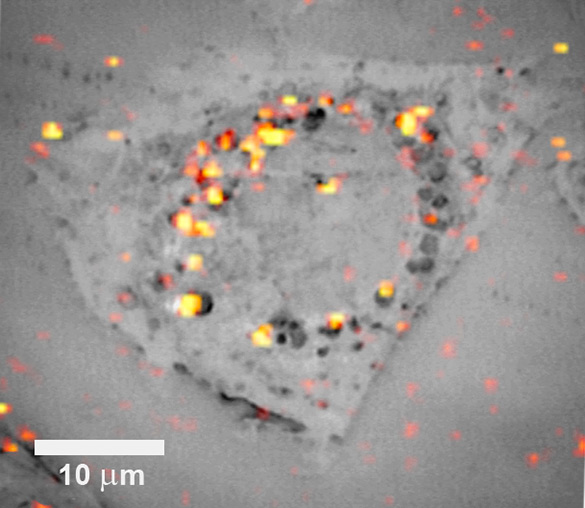 UT Dallas researchers are using advanced microscopy techniques to track the presence of carbon nanotubes in cells and study their potential toxic effects. This slide shows where carbon nanotubes accumulate in a rat cell. The highest concentrations in this cell are shown in yellow.

Because individual multi-walled carbon nanotubes are very tiny – so small that they can infiltrate biological cells – they also can be used in nanomachinery, but their diminutive size also poses concerns. Even as the production and use of multi-walled carbon nanotubes are increasing rapidly worldwide, it’s unclear whether they adversely affect human health, Draper said.

“Multi-walled carbon nanotubes are made by the ton, in the form of a powder that is very, very light,” Draper said. “There is the potential for these to get loose in the environment as particulates that could be inhaled.”

Pantano said research on the health effects of these materials is “an immature field.”

“There is laboratory evidence that they are toxic, but the published scientific literature is a mess,” Pantano said. “You can go to the literature and find data to support any position.”

Draper said one of the prevailing theories is that multi-walled carbon nanotubes can enter cells and irritate them to the point that the cells secrete chemicals called cytokines, which promote inflammation.

“Pro-inflammatory cytokines attract all kinds of other cells to the inflamed area, including macrophages, which are cells that release chemicals designed to kill bacteria,” Draper explained. “That process, however, generates reactive oxygen species. These are molecules that can cause genetic mutations in mammalian cells, possibly leading to cancer.”

Draper, Pantano and their colleagues will carry out precisely controlled experiments on cells to determine how multi-walled carbon nanotubes get into human cells, how much gets in, and where the carbon material accumulates. To do this, they will use a technique called laser scanning confocal Raman microscopy, a relatively new approach to cell imaging.

Armed with a microscope upgrade funded by the office of the dean of the School of Natural Sciences and Mathematics, the team will use a technique they invented to distinguish multi-walled carbon nanotubes from other types of carbon found in human cells.

“If you’ve got some gold nanoparticles in a cell, it’s pretty easy to find those,” Pantano said. “But life on Earth is carbon-based, with lots of carbon in every cell. When you’ve got a carbon nanotube inside a carbon-based cell, it’s hard to detect those specifically.

“We developed and patented a technology to detect carbon nanotubes inside a carbon-rich environment, so we’ll use that to determine how many nanotubes are in our laboratory cells. The Raman microscopy will then tell us where they’re located in those cells.”