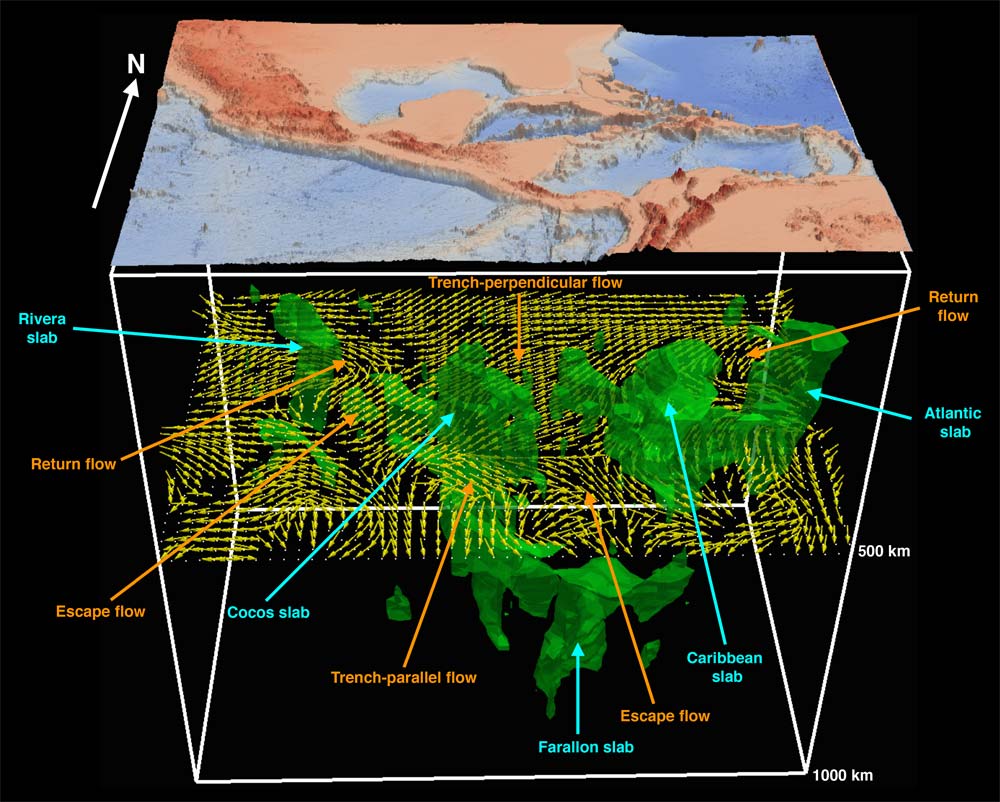 UT Dallas geoscientists used earthquake data and a computationally intensive technique called a full waveform inversion to create 3D images of the geometry of subducting slabs (green bodies) and induced mantle flows (yellow arrows) under Central America and the Caribbean Sea at a depth of 500 kilometers.

Geoscientists at The University of Texas at Dallas recently used supercomputers to analyze massive amounts of earthquake data to generate high-resolution, 3D images of the dynamic geological processes taking place far below the Earth’s surface.

In a study published April 29 in Nature Communications, the UT Dallas research team described how it created images of mantle flows in a subduction region under Central America and the Caribbean Sea using a computationally intensive technique called a full waveform inversion (FWI).

“This is the first comprehensive seismic study to directly image 3D mantle flow fields in actual subduction environments using advanced FWI technology,” said Dr. Hejun Zhu, corresponding author of the study and assistant professor of geosciences in the School of Natural Sciences and Mathematics. Dr. Jidong Yang, who earned his PhD in geosciences from UT Dallas in May, and Dr. Robert Stern, professor of geosciences, are the study’s co-authors.

Between the relatively thin layer of the Earth’s crust and its inner core lies the thickest part of the planet, the mantle. Over short time periods, the mantle can be considered solid rock, but on the geological time scale of millions of years, the mantle flows like a viscous fluid. 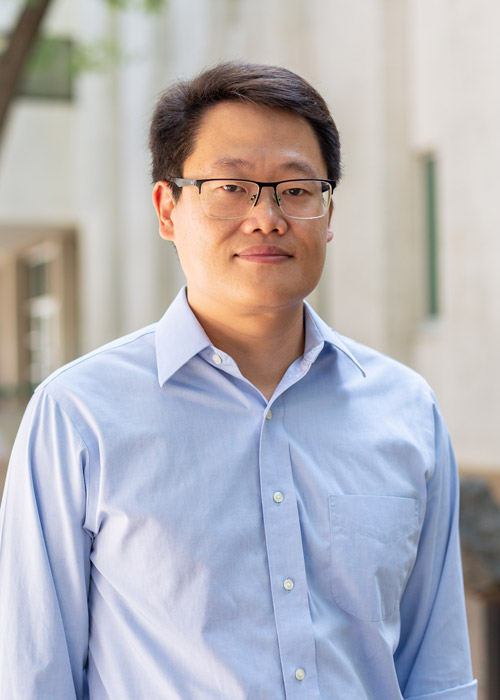 “Subduction zones are … the source of many natural hazards, such as earthquakes, volcanoes and tsunamis. But the pattern of mantle flow and deformation around descending plates is still poorly understood. The information our techniques yield is crucial for understanding our dynamic planet.”

Dr. Hejun Zhu, assistant professor of geosciences in the School of Natural Sciences and Mathematics

Earth’s crust is broken into pieces called tectonic plates. These plates move across and into the mantle very slowly — about as fast as fingernails grow. At regions called subduction zones, one plate descends under another into the mantle.

“The sinking of oceanic plates into the Earth’s mantle at subduction zones is what causes the Earth’s tectonic plates to move and is one of the most important processes taking place in our planet,” Zhu said. “Subduction zones are also the source of many natural hazards, such as earthquakes, volcanoes and tsunamis. But the pattern of mantle flow and deformation around descending plates is still poorly understood. The information our techniques yield is crucial for understanding our dynamic planet.”

Zhu and his colleagues tackled the problem using a geophysical measurement called seismic anisotropy, which measures the difference in how fast mechanical waves generated by earthquakes travel in different directions inside the Earth. Seismic anisotropy can reveal how the mantle moves around the subducting plate. Similar technology is also used by the energy industry to locate oil and gas resources.

This animation shows a 3D representation of the geometry of subducting slabs (green bodies) under Central America and the Caribbean Sea down to a depth of 1,000 kilometers. If you don’t see the video, watch it on YouTube.

“When a diver dives into water, the water separates, and that separation in turn affects the way the water moves around the swimmer,” Zhu said. “It’s similar with oceanic plates: When they dive into hot mantle, that action induces mantle separation and flow around the plates.”

The research team created the images using high-fidelity data recorded over a 10-year period from 180 earthquakes by some 4,500 seismic stations located in a grid across the U.S. The numerical calculations for the FWI algorithm were performed on the high-performance computing clusters at the National Science Foundation (NSF)-supported Texas Advanced Computing Center at UT Austin, as well as on supercomputers at UT Dallas.

“Previously we couldn’t ‘see’ under the Earth’s surface, but by using this technology and this very wonderful data set, we are able to delineate the 3D distribution of various seismic phenomena and tell at what depths they are occurring,” Zhu said.

The images confirmed that the plates in the study region are not large, solid pieces but rather are fragmented into smaller slabs.

“This looks different from the textbook depictions of tectonic plates coming together, with one solid piece of oceanic plate descending under another solid piece,” Zhu said. “Some researchers have hypothesized that this fragmentation occurs, and our imaging and modeling provides evidence that supports that view.”

Zhu’s 3D model shows complex mantle flow patterns around a number of descending fragments and in the gaps between slabs. Such chunky, fragmented pieces are seen in regions throughout the world, Zhu said.

In the northwestern U.S., for example, the Juan de Fuca Plate is also fragmented into two pieces where it descends under the North American Plate in the Cascadia subduction zone, an area where strong earthquakes have occurred over the centuries.

“We know that most earthquakes happen at the interface between a slab and the mantle. If there is a gap between these fragments, what’s called a window region, you wouldn’t expect earthquakes there,” Zhu said. “If you look at the earthquake distribution along the Cascadia subduction zone, there is a span where you do not have earthquakes. That is probably a region where there is a gap in the subducting oceanic plate.

“The Middle America Trench that we studied has its own unique, dynamic properties. In the future, we plan to shift our attention to other subduction zones, including the Kermadec-Tonga subduction zone in the region of the Australian and Pacific plates.”

The research was funded by a grant to Zhu from the NSF’s Division of Earth Sciences.