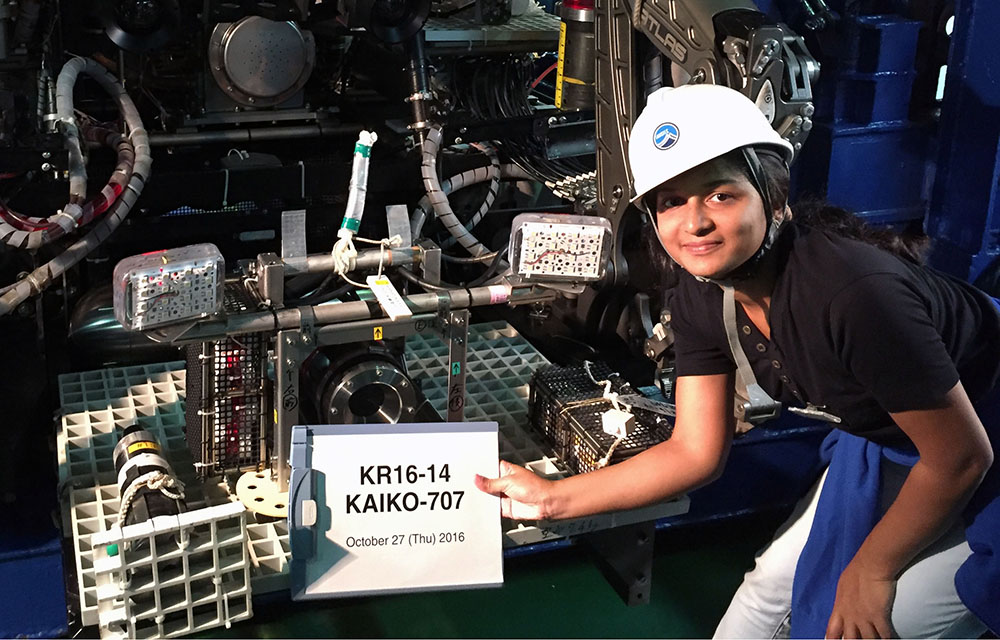 Diluni Hetti, a geosciences doctoral student at UT Dallas, poses with the deep-sea, remotely operated submersible vehicle KAIKO, which is used to study the ocean floor.

Two UT Dallas graduate students from the Department of Geosciences are taking part in a Japanese research cruise studying the geology and biology of the Pacific Ocean’s depths, the Mariana Trench.

Brent Bowers and Diluni Hetti have joined the scientific team aboard the deep-sea research vessel KAIREI, which is owned and operated by the Japanese Agency for Marine-Earth Science and Technology (JAMSTEC). Dr. Asahiko Taira, who earned his PhD in geosciences from UT Dallas in 1976, is president of the agency.

The research ship left the island of Saipan, a U.S. commonwealth in the western Pacific Ocean, on Oct. 26 and will return to port at Naha, Japan, on Sunday. 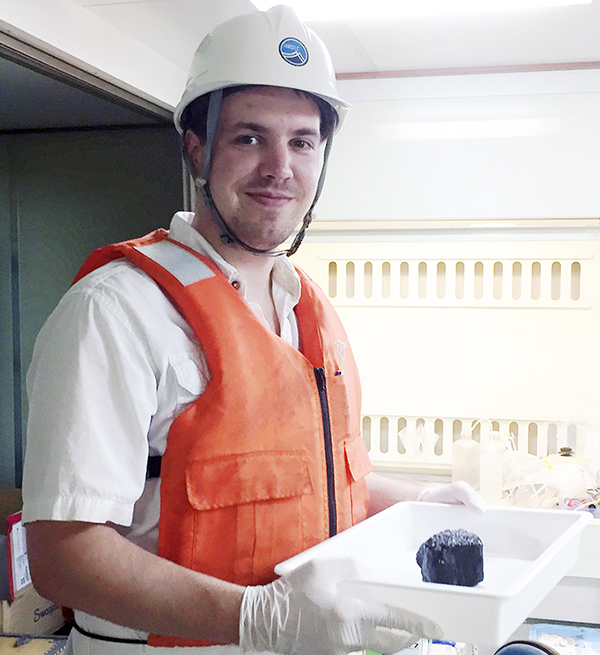 On board a Japanese research vessel, Brent Bowers, a geosciences graduate student at UT Dallas, examines geological samples retrieved from the sea floor.

The Mariana Trench, located in the western Pacific Ocean just south of Japan, marks a boundary between two slowly moving pieces, or plates, of the Earth’s crust — the sinking Pacific plate and the overriding Philippine Sea plate. It includes the deepest point in the ocean, Challenger Deep, which reaches 7 miles down.

The UT Dallas students — neither of whom have been to sea before this voyage — joined a research team on board the KAIREI that includes geologists, biologists and microbiologists. The group will use the deep-sea, remotely operated submersible vehicle KAIKO 7000 to study the seafloor at a maximum depth of 7,000 meters, or more than 4 miles.

“The goal of this research cruise is to study an unusual field of hydrothermal vents near Challenger Deep,” said Dr. Robert Stern, professor of geosciences at UT Dallas. Stern leads the University’s participation in the Mariana Trench research group, which over several years has involved faculty, research scientists and undergraduate and graduate students in oceanographic studies.

The vent field, known as the Shinkai Seep Field (SSF), is located about 3 miles below the ocean’s surface. It was discovered in 2010 by a joint Japanese-US research team, which included UT Dallas geoscientists.

The vents serve as oases in an otherwise lifeless area in the ocean depths, where sunlight does not reach to fuel photosynthesis in plants, and nutrients from dead plants and animals from above are eaten before they can drift down to the sea floor.

“Chemical-laden waters rise from the sinking Pacific plate into deep fissures through rocks in the Earth’s mantle and then flow to the surface,” Stern said. “These vents create an environment suitable for life.”

Bowers and Hetti are using the submersible vehicle to study and sample geological formations and biological communities in the vent field, including colonies of large vesicomyid clams that the joint Japanese-U.S. team discovered living there in 2010.

“The kind of research experience and discovery science that comes from participating in an international marine geoscientific expedition also helps students learn the similarities and differences in how different cultures carry out science.”

Bowers said he’s excited to participate in the cruise, which provides a unique hands-on research opportunity to explore the ocean’s depths.

“To me the exciting part about geology is the geologically active and unexplored areas of the Earth,” Bowers said. “As a geology student in Texas, I am pretty far away from both of those. But on this trip we will be between the Mariana Trench and its associated volcanic arc. So not only do I get to analyze rocks from an active setting, but I get to do it with the help of a submersible vehicle that dives down thousands of meters to an area that has sparsely been explored.”

Bowers introduced a new analytical tool to the science team aboard the JAMSTEC cruise, a portable X-ray fluorescence (XRF) analyzer. The device allows estimation of the chemical compositions of solid materials, including rocks, sediments, chimneys and shells.

When the submersible vehicle comes up from a dive, there is a hustle for the samples brought back, Bowers said, so he usually waits to scan the rocks the next day when no one is in the labs.

“There is not a lot of space, so I find any place I can and then pack up the XRF each day when I’m done,” he said.

For Hetti, whose doctoral research is focused on hydrothermal vents, her first research cruise is a much-anticipated opportunity.

“When I first started working on the vents, I was wondering whether I could go there, see what it’s like on a ship and learn how they carry out these experiments on board,” she said before embarking. “I’m so glad I got this chance to experience these things. I hope to participate on these vessels in the future as well.”

“Geoscientific research like this requires that students and professors leave the classroom and observe the natural world,” Stern said. “The kind of research experience and discovery science that comes from participating in an international marine geoscientific expedition also helps students learn the similarities and differences in how different cultures carry out science.”