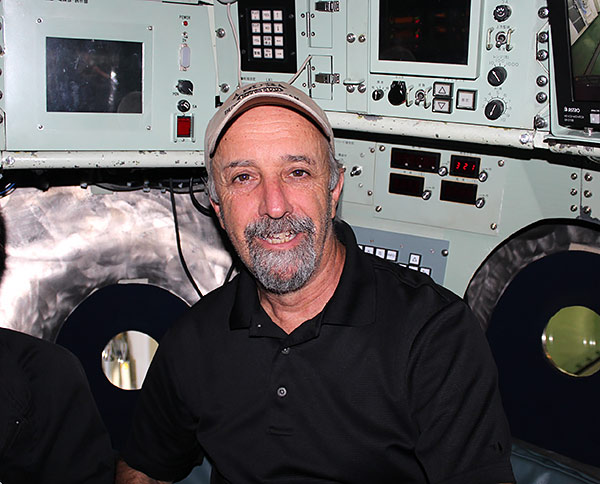 Dr. Ignacio Pujana, a senior lecturer in the Department of Geosciences, dived to the Mariana Trench as part of the expedition in July. The team used a three-person sub dubbed Shinkai 6500, which can dive to depths of about 6,500 meters.

Dr. Ignacio Pujana, a senior lecturer in the Department of Geosciences at UT Dallas, has one thing in common with Academy Award-winning director James Cameron: Each has spent time squeezed into a submersible vehicle to study the Mariana Trench, a region of the ocean deeper than Mount Everest is high.

The trench, in the western Pacific Ocean just south of Japan, marks a boundary between two slowly moving pieces, or plates, of the Earth’s crust — the sinking Pacific plate and the overriding Philippine Sea plate.

It includes the deepest point in the ocean, Challenger Deep. This relatively small depression near the southern end of the trench reaches 7 miles down and is the subject of a new movie by Cameron, “Deepsea Challenge 3D,” which opened in theaters this month. The movie chronicles Cameron’s 2012 record-breaking solo descent in a submersible vehicle to Challenger Deep.

Pujana spent most of July aboard the research vessel Yokosuka as part of a U.S.-Japan team exploring the trench using a three-person submersible. His dive was not quite as deep as the one in Cameron’s movie — only about 4 miles — but it revealed a treasure trove of geology and biology.

“Life is abundant in the water column as you sink in complete darkness,” Pujana said. “The sub is enveloped in bioluminescent creatures, and on the bottom as far as 6,500 meters there is always something alive — fish, jellyfish, crinoids, sponges, etc.”

Here’s how the deepest part of the world's oceans measures up against the Earth’s highest mountain:

Deepest point (at Challenger Deep): Feet (about 36,000), meters (11,000), miles (7)
Location: Pacific Ocean, south of Japan
Expeditions: The first manned descent occurred in 1960. The next one didn't happen until James Cameron's record-setting journey in 2012.

This was the third expedition to the region for Pujana, who teaches geosciences and oceanography classes at UT Dallas. He was joined by scientists from Japan, the University of Hawaii and the University of Rhode Island for the research cruise, which was funded by the Japanese government and the National Science Foundation.

During his dive — the expedition completed eight —  Pujana took photos of an accumulation of grape-size spheres covered in sediment.

“They’re most probably a colony of organisms,” although what kind was a mystery, he said.

The submersible, called Shinkai 6500, can dive to depths of about 6,500 meters, or about 4 miles. Each dive on the expedition took a full work day: three hours to dive about 6,400 meters and 2½ hours to come back up, leaving about three hours for the researchers to gather samples and collect data.

The sub is fitted with high-definition video and still cameras, plus two robotic arms that manipulate devices and retrieve samples. Although the sub is autonomous, it is in constant contact with the mothership above via sound pulses transmitted through the water.

Pujana’s geological interest in the area focuses on the Earth’s crust and mantle, a layer of the Earth that lies just below the outer crust that humans live atop. The mantle is about 1,800 miles thick, and is mostly solid, although it can move like a thick liquid.

“In this area, there is a unique exposure of about 5 vertical kilometers (3 miles) of upper mantle in the inner trench wall,” Pujana said. “There are very few places on Earth where the mantle is exposed. We might be able to bring up about 30 to 40 samples on a geological dive.”

He said he was surprised by “the exposure of thousands of meters of a deep part of the crust right in front of the sub, and the chance to take samples.”

This expedition, like previous trips, also examined the biology of the area, including organisms living around cold seeps in the inner trench wall. In this region where light, heat and food are scarce, organisms such as bacteria have evolved to survive on the chemicals seeping out of the walls of the trench. Those bacteria provide food for larger creatures, including clams, snails and crabs.

On Pujana’s dive, the researchers gathered data on the temperature, pH and other conditions at the seeps, and they retrieved samples.

“The fluids in these seeps have unusual compositions because they form when mantle rocks are altered by circulating seawater,” Pujana said.

The research team has previously published findings of earlier dives in the journal Proceedings of the National Academy of Sciences.

Dr. Robert Stern, professor of geosciences at UT Dallas, leads the University’s participation in the Mariana Trench research group, which over several years has involved undergraduate and graduate students in oceanographic studies. Although he did not join this summer’s expedition, he has dived in the trench twice in the Shinkai 6500. He noted the differences between the record dive made by Cameron and those made by his team.

“There are three big differences in our efforts,” Stern said. “First, Cameron dove deeper than we have been able, deeper than we can hope to dive. Second, he brought back one sediment sample, whereas our dives have recovered many samples, which our team studies in the lab and writes scientific papers about.

“Finally, we have completed 20 or so dives to study the Mariana Trench, whereas Cameron has only done one. Still, I look forward to seeing his movie.”