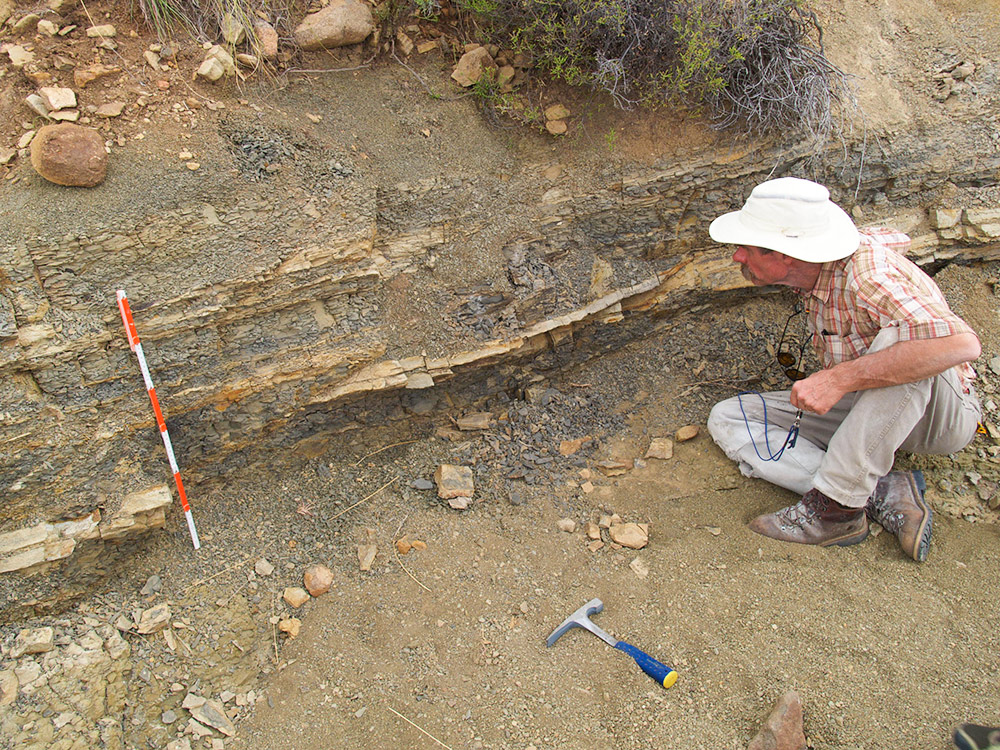 Dr. John Geissman, professor and head of the Department of Geosciences, is part of an international research team studying exposed rocks in the Karoo Basin in southern South Africa.

New evidence gathered from the Karoo Basin in South Africa sheds light on a catastrophic extinction event that occurred more than 250 million years ago and wiped out more than 90 percent of life in Earth’s oceans and about 70 percent of animal species on land.

In research to be presented Wednesday at the annual meeting of the Geological Society of America and published in the October issue of the journal Geology, a University of Texas at Dallas geologist and his colleagues describe new findings that challenge the currently accepted model of the “Great Dying” and how it affected land animals. That event occurred at the end of the Permian geologic period.

The new evidence derives from a key volcanic ash deposit that the team discovered in rock layers, or strata, that were reported to chronicle the mass extinction. By dating the volcanic ash-bearing deposit, researchers concluded that two phases of this extinction — one on land, the other in the oceans — occurred at least 1 million years apart, as opposed to roughly at the same time, as the geoscience community has assumed for decades.

Based on previous dating of shelly fossils and ash beds in marine strata, the die-off among marine species has been well determined and is generally agreed upon by scientists to have occurred about 251.9 million years ago.

However, the timing of the extinction on land has been more challenging to date definitively. This is due, in part, to a dearth of datable volcanic deposits below and above plant and animal fossils in rocks surrounding the boundary where the Permian period ends and the Triassic begins, said Dr. John Geissman, professor and head of the Department of Geosciences and one of the authors of the study. 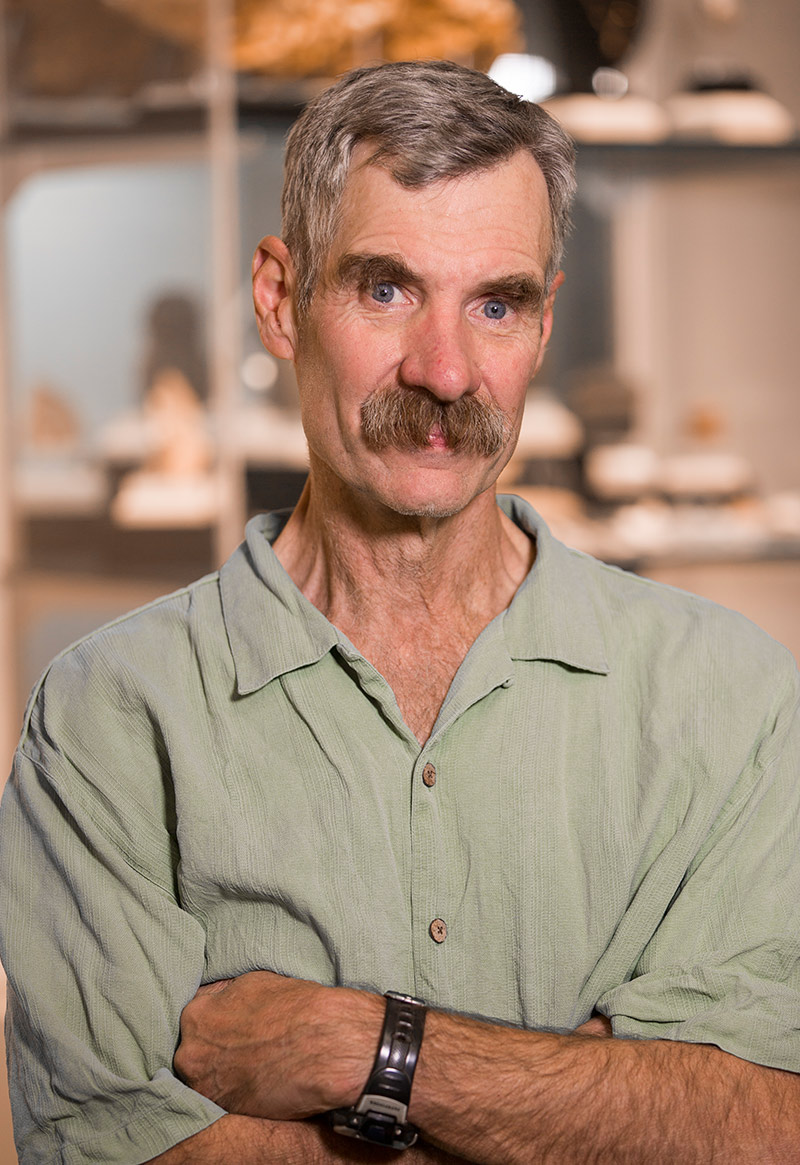 “There has been some concern in the scientific community about whether the extinction among vertebrates on land was actually coincident with that in the marine realm in terms of their timing,” Geissman said. “Nonetheless, many researchers have just tacitly assumed that the land event occurred roughly concurrently with the marine extinction.”

Geissman is part of an international research team led by Dr. Robert Gastaldo, lead author of the Geology study and the Whipple-Coddington Professor of Geology at Colby College in Maine. Gastaldo and his colleagues have spent more than a decade conducting intensive study of exposed rocks in the Karoo Basin in southern South Africa. These regions preserve fossils that chronicle what has long been interpreted as the disappearance of key reptile and amphibian species at the end of the Permian period, and the re-emergence of completely different species in the Triassic period. The rock layers straddle the space in between where scientists infer the global extinction occurred.

Geissman joined Gastaldo’s Karoo Basin team about four years ago. As an expert in paleomagnetism, he uses magnetic polarity stratigraphy to help determine the age of ancient rock layers. The process involves examining variations in Earth’s magnetic field polarity over time that are preserved in the layers. Two years ago, during a hike with a colleague through an arroyo in the Old Lootsberg Pass area in the Karoo Basin, Geissman noticed a feature in the rocks that looked familiar.

“Typically in this area, if there is a gulley, everything exposed will be preserved, which is ideal,” Geissman said. “As we were walking up this arroyo I saw something that I knew I’d seen before in the Western U.S. where I teach a field geology class for UT Dallas students, but I hadn’t seen it here before.

“I knew exactly what it was — it was a fossilized volcanic ash bed.”

The find was significant for two reasons. One, zircon crystals found in ash beds can be dated geologically by examining the decay rate of uranium isotopes contained in the zircon. And secondly, according to the researchers, this ash bed was the first datable evidence found in close proximity to the position in the layers of rock where the extinction of land species was thought to have taken place.

In this video, Geissman discusses the research and its significance. Click here to watch it on YouTube.

The petrified ash bed lies about 60 meters below the inferred extinction event, which means it resulted from a volcanic eruption that occurred earlier than the extinction. In the world of geology, stratigraphic thickness equates to time — over the eons, layers of sediments are laid down at a rate of so many meters per thousand years, and in this region of the globe, the sedimentation rates translate those 60 meters into, roughly, between 200,000 and 300,000 years, Geissman said.

The team dated the volcanic ash bed at about 253.5 million years old, so moving forward in time 200,000 years — or 60 meters — would indicate the terrestrial phase of the extinction took place about 253.3 million years ago, according to the study.

“This study places the terrestrial vertebrate turnover about 1.5 million years earlier than the accepted estimated age of the marine end Permian-extinction,” Geissman said. “Even if we conservatively say they were a million years apart, that still challenges long-held assumptions about the largest extinction event in Earth’s history.”

Geissman’s examination of the distribution of magnetic polarity in rock samples from the Karoo Basin backed up the team’s conclusions. In January, Geissman will join his colleagues again for further research in the region.

“It’s been a lot of fun working with a great group of stimulating colleagues willing to challenge things,” Geissman said. “It was very gratifying to walk out along an arroyo, see something that I had seen in much younger rocks in the Western U.S., and just know that the dating should work, and indeed it did.

“Part of the satisfaction in this type of research is the serendipity in terms of finding things. It’s all about tromping over as much real estate as you can.”

The research conducted by Gastaldo and his students was funded by the National Science Foundation and Colby College, and supported by a Fulbright Fellowship. Geissman’s contributions were supported by funds from UT Dallas. The Council for Geosciences in Pretoria, South Africa, also provided support for the work.