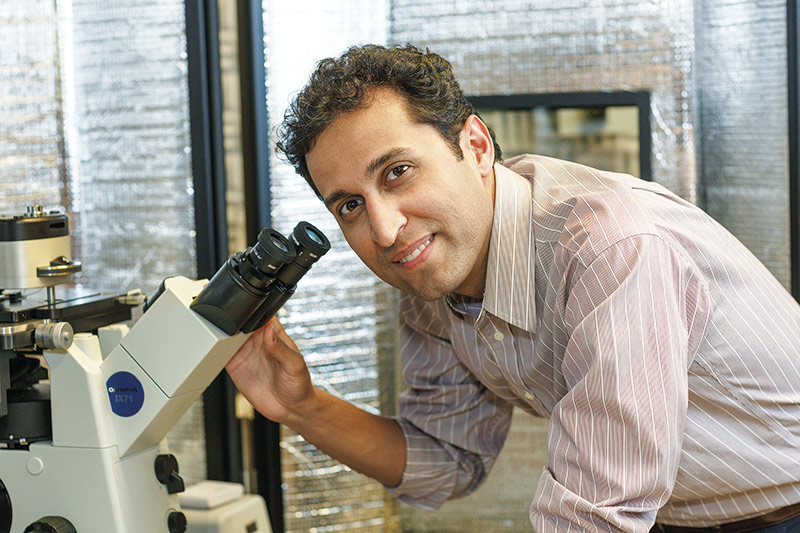 Dr. Majid Minary, an assistant professor of mechanical engineering, was senior author of the study.

Researchers at UT Dallas have created new structures that exploit the electromechanical properties of specific nanofibers to stretch to up to seven times their length, while remaining tougher than Kevlar.

In a study published by ACS Applied Materials and Interfaces, a journal of the American Chemical Society, researchers twisted nanofiber into yarns and coils. The electricity generated by stretching the twisted nanofiber formed an attraction 10 times stronger than a hydrogen bond, which is considered one of the strongest forces formed between molecules.

Researchers sought to mimic their earlier work on the piezoelectric action (how pressure forms electric charges) of collagen fibers found inside bone in hopes of creating high-performance materials that can reinforce itself, said Dr. Majid Minary, an assistant professor of mechanical engineering in the University’s Erik Jonsson School of Engineering and Computer Science and senior author of the study.

“We reproduced this process in nanofibers by manipulating the creation of electric charges to result in a lightweight, flexible, yet strong material. Our country needs such materials on a large scale for industrial and defense applications.”

“We reproduced this process in nanofibers by manipulating the creation of electric charges to result in a lightweight, flexible, yet strong material,” said Minary, who is also a member of the Alan G. MacDiarmid NanoTech Institute. “Our country needs such materials on a large scale for industrial and defense applications.”

For their experiment, researchers first spun nanofibers out of a material known as polyvinylidene fluoride (PVDF) and its co-polymer, polyvinvylidene fluoride trifluoroethylene (PVDF-TrFE).

Researchers then twisted the fibers into yarns, and then continued to twist the material into coils.

Researchers then measured mechanical properties of the yarn and coils such as how far it can stretch and how much energy it can absorb before failure.

“Our experiment is proof of the concept that our structures can absorb more energy before failure than the materials conventionally used in bulletproof armors,” Minary said. “We believe, modeled after the human bone, that this flexibility and strength comes from the electricity that occurs when these nanofibers are twisted.”

The next step in the research is to make larger structures out of the yarns and coils, Minary said.

The work was funded by the Air Force Office of Scientific Research Young Investigator Research Program and the National Science Foundation.