Cell Mechanism Findings Could One Day be Used to Engineer Organs

Biologists have teamed up with mechanical engineers from the The University of Texas at Dallas to conduct cell research that provides information that may one day be used to engineer organs.

The research, published online in the Proceedings of the National Academy of Sciences, sheds light on the mechanics of cell, tissue and organ formation. The research revealed basic mechanisms about how a group of bacterial cells can form large three-dimensional structures. 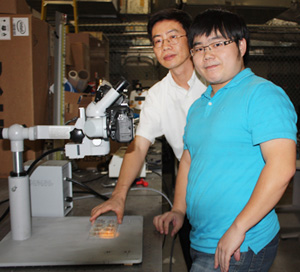 “If you want to create an organism, the geometry of how a group of cells self-organizes is crucial,” said Dr. Hongbing Lu, professor of mechanical engineering and holder of the Louis Beecherl Jr. Chair at UT Dallas and an author of the study. “We found that cell death leads to wrinkles, and the stiffer the cell the fewer wrinkles.”

Organ formation is the result of individual cells teaming with others. The aggregate of the cells and their environment form a thin layer of what is known as a biofilm. These biofilms form 3-D wrinkled patterns.

Senior author Dr. Gürol Süel, now at the University of California, San Diego, and his colleagues noticed dead cells under the wrinkle pattern. They teamed with Lu to discover what came first – the cells’ death or the wrinkling. Lu is an expert in nanomechanics – measuring forces on small objects.

They found that groups of cells dying together within the biofilm resulted in the formation of wrinkles. They also found that the stiffness of the biofilm affected the formation of wrinkles. This is significant because it lays the foundation for the first theory about building a structure in tissues and organs, taking both the biological and mechanical forces into consideration. 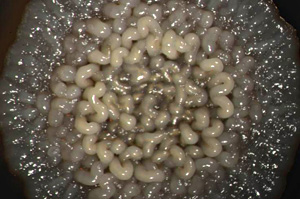 Wrinkle formation that occurred on a four-day-old subtilis biofilm was preceded by cell death.

“There are ways to control whether a biofilm is soft or stiff, and then you control the wrinkling and the ultimate structure the cells become,” Lu said.

Researchers then controlled the location where cells died and were able to create artificial wrinkle patterns, verifying their findings.

All of the research was done on bacteria known as Bacillus subtilis.

“Bacillus subtilis has many aspects that are similar to other cells,” Lu said. “If we understand how this process works in bacteria, it can open up the door to higher levels of life.”

Yingjie Du, a doctoral student and Dr. Zhenxing Hu, a postdoctoral research associate in the Erik Jonsson School of Engineering and Computer Science at UT Dallas were part of the engineering team that contributed to this research. Researchers from UT Southwestern Medical Center, and Universitat Politécnica de Catalunya and Universitat Pompeu Fabra, both in Spain, also contributed.

This research was supported by the National Institutes of Health and the James S. McDonnell Foundation.