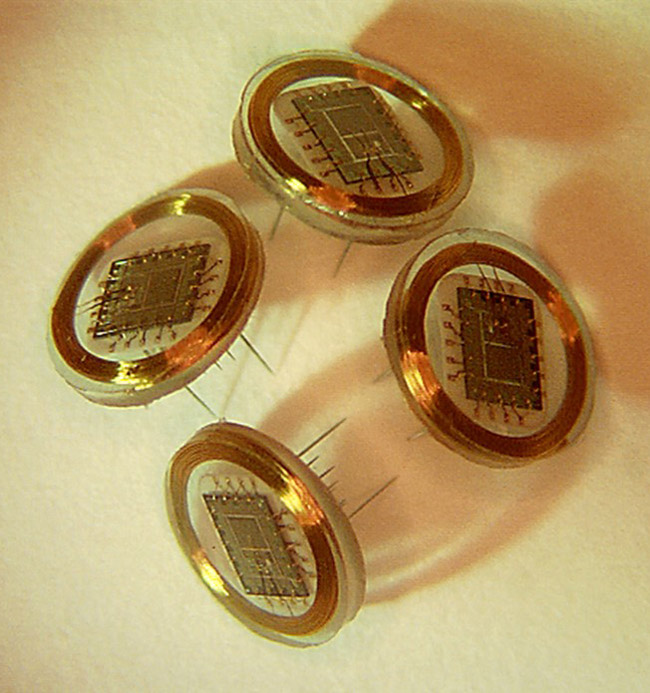 The wireless floating microelectrode array is part of the device that will be implanted in the visual cortexes of five clinical trial participants. UT Dallas researchers will monitor how participants respond to the electrodes. (Photo courtesy of Illinois Institute of Technology)

Implanting a device into the brain to generate a rough perception of sight for people with blindness may sound like the stuff of science fiction, but researchers from The University of Texas at Dallas and partner institutions aim to make that vision a reality.

The project involves implanting devices containing small electrodes into the occipital cortex, a part of the brain that processes visual information. The device will receive signals based on images from a camera that the user wears on a headband. The signals command the implanted devices to electrically stimulate neurons to produce an apparent visual perception of tiny white spots called phosphenes. Researchers hope these white spots can form images that can help people with blindness better recognize objects and navigate their surroundings.

Dr. Stuart Cogan, professor of bioengineering in the Erik Jonsson School of Engineering and Computer Science, is working on the project with lead researchers at the Illinois Institute of Technology (IIT) who received a grant (UH3NS095557) from the National Institute of Neurological Disorders and Stroke. The grant, part of the National Institutes of Health’s Brain Research through Advancing Innovative Neurotechnologies (BRAIN) Initiative, is supporting a small clinical trial that will test the technology in five people.

The study will provide the first opportunity for researchers to learn whether and how well the intracortical visual prosthesis works for people with blindness.

During the clinical trial, Cogan and his team will monitor the safety of the electrical stimulation. The UT Dallas researchers will collect, analyze and track data from the electrodes. Each device has up to 16 of the tiny conductors, each one smaller in diameter than a human hair. 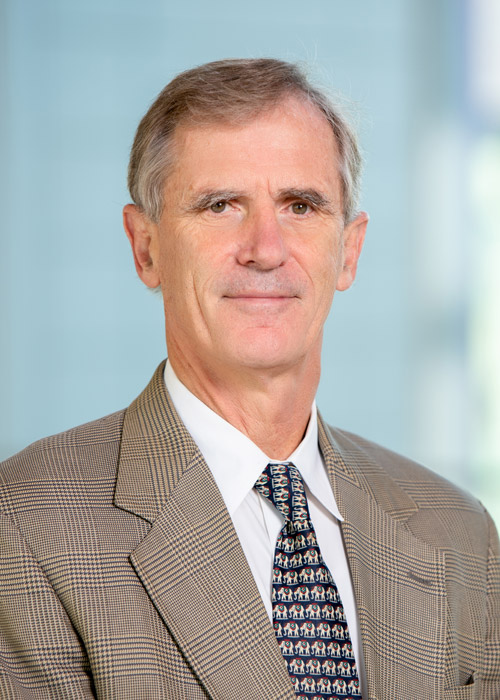 “The user will have the perception of patterns made up of spots of light or phosphenes. Users are expected to be able to identify light and dark areas of a scene. There is a reasonable expectation that the visual prosthesis will aid in navigating spaces by identifying edges of walls, openings such as doors and windows, and maybe motion.”

Dr. Stuart Cogan, professor of bioengineering in the Erik Jonsson School of Engineering and Computer Science

“Our role at UT Dallas is to study the response of the electrodes,” Cogan said. “Our job will be to examine the electrochemistry of the electrodes and make judgments about the levels of electrical current stimulus we can deliver without harmful effects.”

Cogan has worked with researchers involved in the project for 15 years. Before joining UT Dallas in 2014, Cogan, as vice president of EIC Laboratories, worked with the IIT researchers to develop the electrode technology. His research has involved ensuring that the electrodes are stable and reliable for long-term use in the brain.

Clinical trial participants will work with researchers to determine how well the electrical stimulation produces phosphenes and whether these phosphenes can be used by the participant to interpret their surroundings.

“The user will have the perception of patterns made up of spots of light or phosphenes,” Cogan said. “Users are expected to be able to identify light and dark areas of a scene. There is a reasonable expectation that the visual prosthesis will aid in navigating spaces by identifying edges of walls, openings such as doors and windows, and maybe motion.”

Cogan emphasized that the participants, who have not yet been selected, go far beyond a typical volunteer role.

The first participant is expected to receive an implant in March, with surgery to take place at Rush University Medical Center in Chicago.

Graduate students in the Jonsson School will assist Cogan on the project.

Other participating institutions include the Rush University Medical Center, Johns Hopkins University, The Chicago Lighthouse, the University of Chicago, Microprobes for Life Science and Sigenics Inc.