If the future of driving steers toward widespread automation, cars will need to communicate with each other and respond to the changing environment in milliseconds. But how will it work?

Dr. Yang Hu, assistant professor of electrical engineering at The University of Texas at Dallas, has received a five-year, $500,000 grant from the National Science Foundation (NSF) to develop new hardware and software to handle the complexity of an automated driving ecosystem in which cars communicate both with other cars and with roadside information nodes.

Hu, who joined the Erik Jonsson School of Engineering and Computer Science (ECS) in 2017 after completing his PhD at the University of Florida, earned the NSF Faculty Early Career Development (CAREER) Award for his project, “Rethinking the Architectures and Systems for Autonomous Driving Infrastructure.” 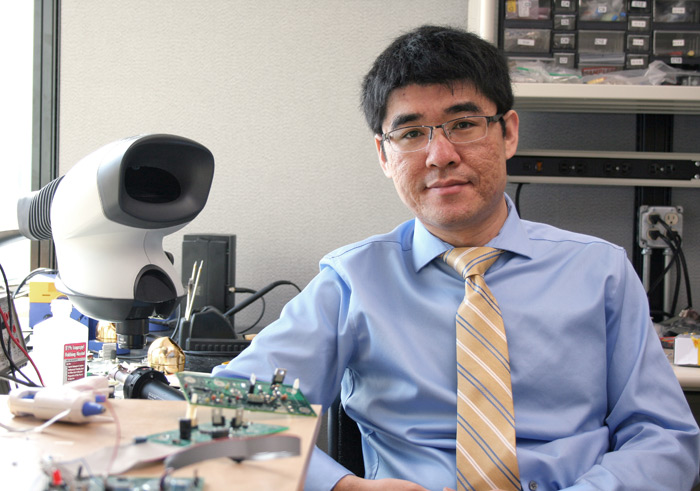 “We knew we were getting an excellent faculty member when we enticed Dr. Hu here in 2017,” said Dr. Lawrence Overzet, department head of electrical and computer engineering in ECS. “He had already received the first of two best paper nominations at HPCA [High-Performance Computer Architecture] — one of the top computer architecture conferences — and was engaged in some highly interesting research on server system architectures and networking infrastructures applied to data centers. His new research direction builds upon that prior experience and focuses it on even more important applications.”

Hu started exploring computing support for autonomous driving after arriving at UT Dallas. He believes the technology will become “essential to our everyday lives.”

“This project aims to rethink how to design and build computer hardware and software for future 5G-enabled self-driving cars,” he said. “If successful, my research will make fully autonomous driving practical.”

Hu explained that the complex demands on any autonomous driving system have thus far prevented implementation due to two primary critical technological limitations.

“First, there isn’t an established design for the low-level hardware and software under such extreme safety demands — in other words, we don’t have the resolution to design high-speed, low-cost, low-power consumption hardware and software for self-driving cars,” he said. “Second, self-driving cars need to make decisions based on two sources of data — information gathered in the immediate surroundings and info from beyond that. To make use of information from multiple sources, we need more efficient coordination of communication between diverse computation parts.”

Hu said the different layers of information that cars would use in the automated system he envisions would improve the safety of the implementation.

“Traditional autonomous vehicles rely on car-carried sensors, cameras and radars to detect surrounding objects,” he said. “A connected autonomous driving system allows vehicles to communicate with each other and with roadside infrastructures by integrating wireless communication technology on cars.”

For example, in Hu’s model, a car could tap into roadside information nodes to discover road hazards and traffic delays that are miles away and make decisions proactively, whereas the traditional model only gathers this information when the vehicle is within sensing range of the hazard.

“This project aims to rethink how to design and build computer hardware and software for future 5G-enabled self-driving cars. If successful, my research will make fully autonomous driving practical.”

“Current hardware and software platforms to support such techniques are very inflexible,” Hu said. “Our project will develop a uniform computing platform so that communication and computation functions can flexibly deploy in both the roadside and car-side computers.”

The research that led to this grant was conducted primarily by Hu and four electrical and computer engineering doctoral students: Zhendong Wang, Xiaoming Zeng, Jianda Wang and Zhen Wang.

“I am fortunate to work with such talented PhD students at UT Dallas, and I look forward to continuing this research with them to conquer these challenges and unexplored problems,” Hu said.