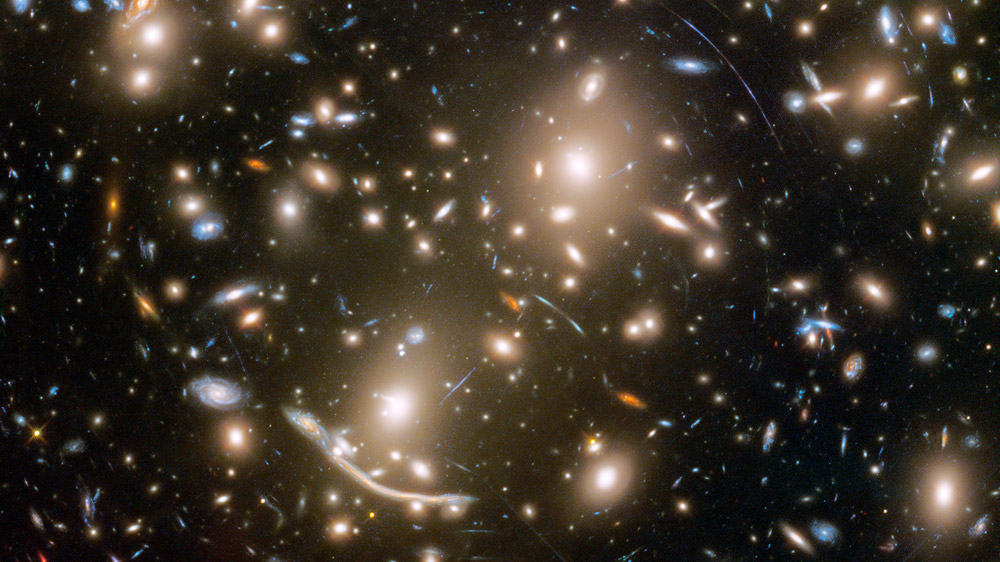 Abell 370 is a galaxy cluster about 4 billion light-years away from Earth in which astronomers observe the phenomenon of gravitational lensing, the warping of space-time by the cluster’s gravitational field that distorts the light from galaxies lying far behind it. This manifests as arcs and streaks in the picture, which are the stretched images of background galaxies. (NASA/Space Telescope Science Institute)

Light from distant galaxies reveals important information about the nature of the universe and allows scientists to develop high-precision models of the history, evolution and structure of the cosmos.

The gravity associated with massive pockets of dark matter that lie between Earth and these galaxies, however, plays havoc with those galactic light signals. Gravity distorts galaxies’ light — a process called gravitational lensing — and also slightly aligns the galaxies physically, resulting in additional gravitational lensing light signals that contaminate the true data.

In a study first published Aug. 5 in The Astrophysical Journal Letters, University of Texas at Dallas scientists demonstrated the first use of a method called self-calibration to remove contamination from gravitational lensing signals. The results should lead to more accurate cosmological models of the universe, said Dr. Mustapha Ishak-Boushaki, professor of physics in the School of Natural Sciences and Mathematics and the corresponding author of the study.

“The self-calibration method is something others proposed about 10 years ago; many thought it was just a theoretical method and moved away from it,” Ishak-Boushaki said. “But I intuitively felt the promise. After eight years of persistent investigation maturing the method itself, and then the last two years applying it to the data, it bore fruit with important consequences for cosmological studies.”

A Lens on the Universe

Gravitational lensing is one of the most promising methods in cosmology to provide information on the parameters that underlie the current model of the universe. 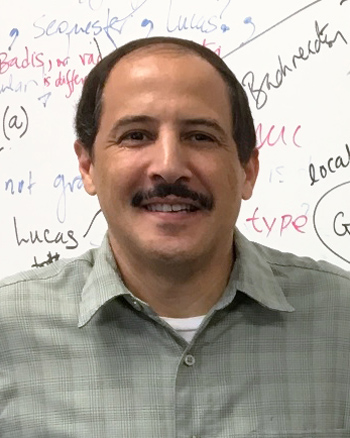 “It can help us map the distribution of dark matter and discover information about the structure of the universe. But the measurement of such cosmological parameters can be off by as much as 30% if we do not extract the contamination in the gravitational lensing signal,” Ishak-Boushaki said.

Due to the way distant galaxies form and the environment they form in, they are slightly physically aligned with the dark matter close to them. This intrinsic alignment generates additional spurious lensing signals, or a bias, which contaminate the data from the galaxies and thus skew the measurement of key cosmological parameters, including those that describe the amount of dark matter and dark energy in the universe and how fast galaxies move away from each other.

To complicate matters further, there are two types of intrinsic alignment that require different methods of mitigation. In their study, the research team used the self-calibration method to extract the nuisance signals from a type of alignment called intrinsic shape-gravitational shear, which is the most critical component.

“Our work significantly increases the chances of success to measure the properties of dark energy in an accurate way, which will allow us to understand what is causing cosmic acceleration,” Ishak-Boushaki said. “Another impact will be to determine accurately whether Einstein’s general theory of relativity holds at very large scales in the universe. These are very important questions.”

Several large scientific surveys aimed at better understanding the universe are in the works, and they will gather gravitational lensing data. These include the Vera C. Rubin Observatory’s Legacy Survey of Space and Time (LSST), the European Space Agency’s Euclid mission and NASA’s Nancy Grace Roman Space Telescope.

“Our work significantly increases the chances of success to measure the properties of dark energy in an accurate way, which will allow us to understand what is causing cosmic acceleration. Another impact will be to determine accurately whether Einstein’s general theory of relativity holds at very large scales in the universe. These are very important questions.”

Dr. Mustapha Ishak-Boushaki, professor of physics in the School of Natural Sciences and Mathematics

“The big winner here will be these upcoming surveys of gravitational lensing. We will really be able to get the full potential from them to understand our universe,” said Ishak-Boushaki, who is a member and a convener of the LSST’s Dark Energy Science Collaboration.

The self-calibration method to remove contaminated signals was first proposed by Dr. Pengjie Zhang, a professor of astronomy at Shanghai Jiao Tong University and a co-author of the current study.

Ishak-Boushaki further developed the method and introduced it to the realm of cosmological observations, along with one of his former students, Michael Troxel MS’11, PhD’14, now an assistant professor of physics at Duke University. Since 2012 the research has been supported by two grants to Ishak-Boushaki from the National Science Foundation (NSF).

“Not everyone was sure that self-calibration would lead to such an important result. Some colleagues were encouraging; some were skeptical,” Ishak-Boushaki said. “I’ve learned that it pays not to give up. My intuition was that if it was done right, it would work, and I’m grateful to the NSF for seeing the promise of this work.”

The research was supported in part by the U.S. Department of Energy. The scientists also used the high-performance computing resources at the Texas Advanced Computing Center, an NSF-funded supercomputer center hosted by UT Austin.