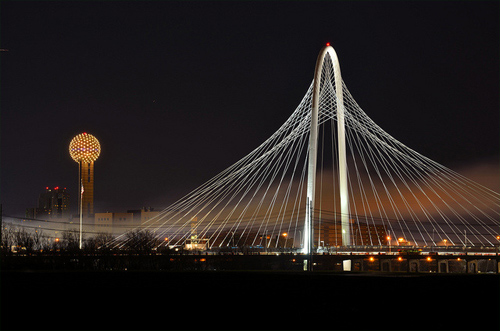 A group of graduate students made a 3-D computer model (top) of the Margaret Hunt Hill Bridge (above) to show the relationship between urban and natural environments.

The UT Dallas community voted, and the winner is: the Margaret Hunt Hill Bridge.

In February, Dr. Georgia Fotopoulos and her graduate students in the Department of Geosciences asked for input on a new project called “3D Dallas,” which aims to raise awareness of the interactions between natural and urban environments.

An online survey and a poll posted on the UT Dallas Facebook page asked the public to choose its favorite Dallas landmark from among five choices. Fotopoulos’ research group would then use terrestrial laser scanning equipment, or LIDAR, to take detailed measurements of the winner and create a 3-D, animated computer rendering.

The iconic bridge garnered the majority of more than 700 votes. The 3-D computer model was displayed at Earth Day Dallas, April 20-21 in Fair Park.

The project was funded by a grant from the Texas Section of the American Society of Civil Engineers (ASCE), which solicited project proposals to help mark its centennial anniversary.

Sean Merrell, president of the Dallas Branch of the ASCE, said each month of the centennial year has a theme, and for April it was sustainable development. 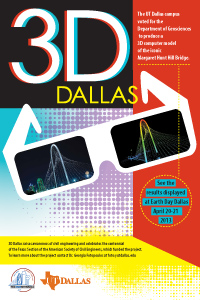 The model was displayed at Earth Day Dallas.

“The opportunity for us to work with students and faculty from UT Dallas has been terrific,” said Merrell, who chaired the centennial planning committee. “In conjunction with Earth Day Dallas, this was the month to reflect upon improving our quality of life by examining how we affect the air we breathe and the ground we build on with the projects we design. This collaboration with UT Dallas was very successful in presenting a very cost-effective way of gathering data utilizing LIDAR technologies.”

Fotopoulos, an associate professor of geosciences, said projects such as 3D Dallas can help raise awareness of how urban, built areas like Dallas interact with the natural environment.

“This project also is about getting young people excited about science and engineering, showing them that the type of work scientists and engineers do can be fun, and you can give back to your community,” Fotopoulos said.