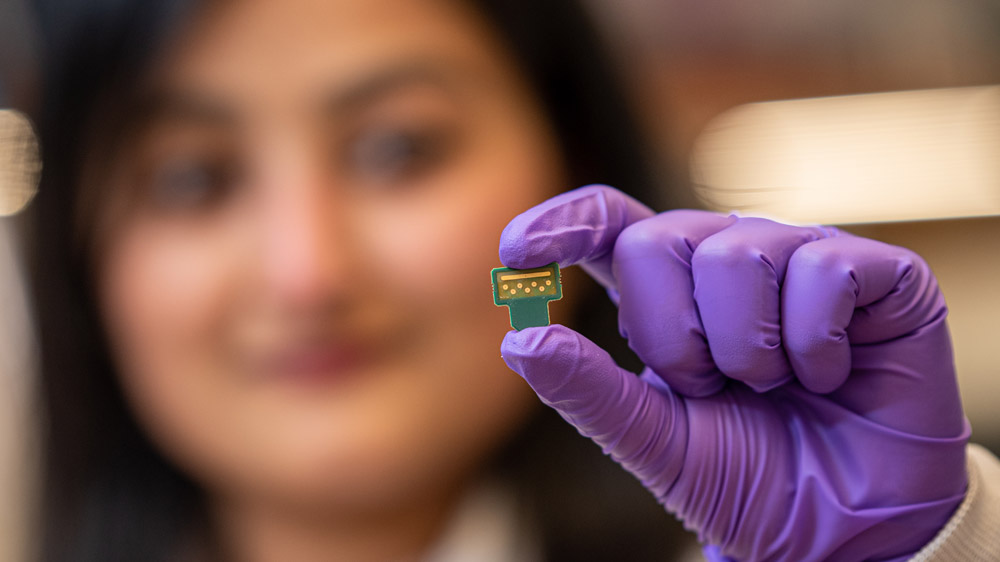 Ambalika Tanak MS’16 holds the biosensor that she and fellow researchers developed to test fluid for specific molecules. Tanak received a Baxter Young Investigator Award, which supports research to develop therapies and medical products that save and sustain patients’ lives, for her work on a first-of-its-kind sepsis-testing sensor.

A University of Texas at Dallas graduate student is developing biosensors to help physicians make faster decisions that could save patients’ lives. Her pioneering work has not only led to recent scientific publications and a pending patent, but also recognition as one of the top young medical researchers in the country.

Ambalika Tanak MS’16, a biomedical engineering doctoral candidate in the Erik Jonsson School of Engineering and Computer Science, recently published a study about a sensor she developed to help surgeons make faster decisions during parathyroid surgery. In another study, which appeared online Oct. 19, 2020, and in the Jan. 1, 2021, print issue of Biosensors and Bioelectronics, she and her co-authors describe a first-of-its-kind sepsis-testing sensor — DETecT Sepsis (Direct Electrochemical Technique Targeting Sepsis).

Her work on the sepsis device recently garnered her a first-tier Baxter Young Investigator Award, which supports research to develop therapies and medical products that save and sustain patients’ lives. Tanak is one of six top-tier recipients of the award, along with students from Harvard University, California Institute of Technology and the University of California, San Diego.

Tanak said she looks forward to the opportunity to collaborate with industry to advance the technology she has developed.

“I hope this work translates into the field and benefits the people who need it the most,” she said.

Dr. Shalini Prasad, department head of bioengineering and the Cecil H. and Ida Green Professor in Systems Biology Science, is Tanak’s advisor and corresponding author of both studies. She said the sepsis sensor could save lives by identifying the life-threatening complication much faster.

Sepsis is an extreme response to an infection that can lead to tissue damage, organ failure and death. COVID-19 infections have triggered sepsis in some patients, especially those who are elderly and have pre-existing conditions. No rapid-testing method exists for the illness.

The sensor is a portable device that monitors a panel of five immune biomarkers using only a single drop of blood plasma, making a diagnosis available within minutes.

“When a patient develops sepsis, every organ thinks it needs to shut down to protect itself. But if every organ shuts down, the person will die,” Prasad said. “It’s a train wreck happening in slow motion. If we could get a snapshot of a patient’s immune response, we can avoid irreversible organ failure or death due to a delayed response time.”

The UT Dallas researchers are studying whether the sensor platform used for the sepsis study could be customized to measure other forms of inflammation, including increase in cytokines, which are proteins released by the immune system at the early stages of viral infections such as COVID-19.

Parathyroid surgery can be challenging for surgeons, who must determine in the operating room how much of the hyperactive gland needs to be removed. Doctors may need to test parathyroid hormone levels in the blood to ensure that the hyperfunctioning part of the gland is removed during the procedure in what can be a time-consuming process using a conventional laboratory testing method. Tanak’s small, portable device, which does not require complicated preparation, helps test the blood faster. 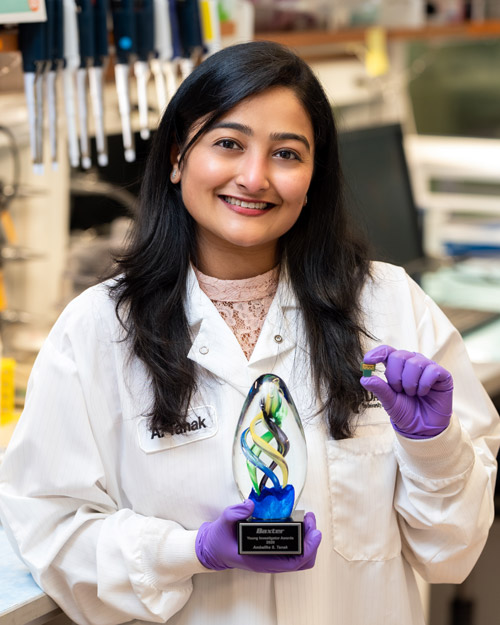 “I always wanted to be associated with the medical field. I wanted to apply engineering principles to solve medical problems. As a biomedical engineer, being able to develop medical device technology that doctors can use for making informed decisions gives me great satisfaction.”

Tanak said she became interested in biomedical engineering after seeing how much doctors relied on medical device technology to save lives when her grandmother was in the hospital years ago. She worked on a sensor device as an undergraduate student in India and continued her education at UT Dallas because of the opportunities to conduct research on biosensors and to collaborate with investigators at UT Southwestern Medical Center.

“I always wanted to be associated with the medical field,” said Tanak, who began her graduate studies at UT Dallas in 2014. “I wanted to apply engineering principles to solve medical problems. As a biomedical engineer, being able to develop medical device technology that doctors can use for making informed decisions gives me great satisfaction.”

In 2018 Tanak received a distinguished abstract award and won the student poster competition at the 70th annual Scientific Meeting & Clinical Lab Expo of the American Association for Clinical Chemistry for her work on the device to determine parathyroid hormone levels in blood.

Prasad said that Tanak’s successes demonstrate the bioengineering department’s commitment to diversity and to providing students with meaningful research opportunities.

“It’s exciting to work with students like Ambalika to develop potentially lifesaving biosensor technology,” Prasad said. “As we tell our students, ‘Your success is our success.’”

In addition to Muthukumar and Prasad, co-authors of the sepsis sensor study were Dr. Subramanian Krishnan, chief science strategist for ACESO (Austere environments Consortium for Enhanced Sepsis Outcomes), which is supported by the Henry M. Jackson Foundation for the Advancement of Military Medicine; Dr. Kevin Schully, science director in the clinical research department of the Biological Defense Research Directorate at the Naval Medical Research Center; and Dr. Danielle Clark, co-founder and director of ACESO. 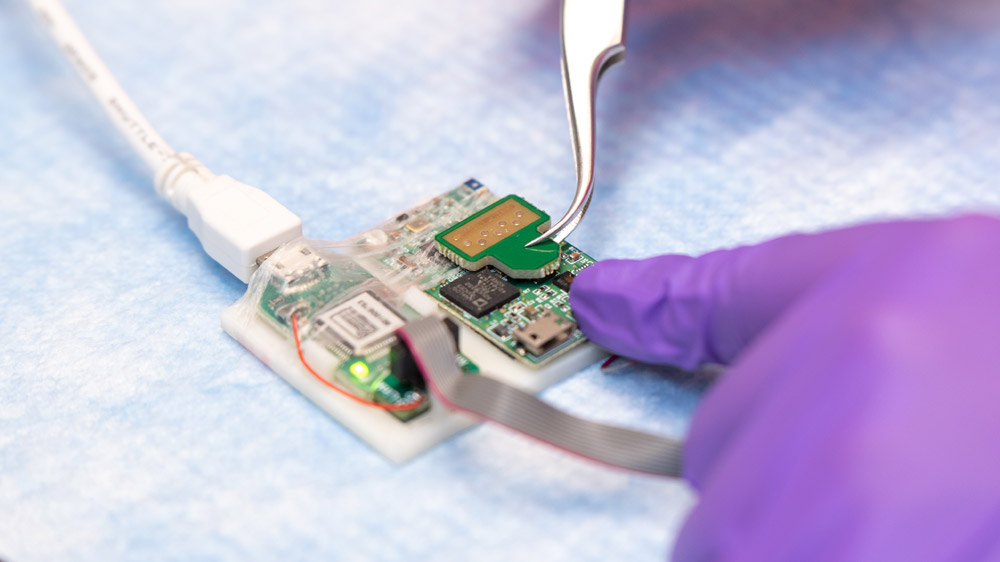 The sensor is mounted on the electronic reader device. Tanak’s sepsis testing device is still awaiting patent approval, and researchers are studying whether the platform could be customized to measure other forms of inflammation in the body.