Vagus Nerve Stimulation Device Gets Closer to Next Stage of Testing 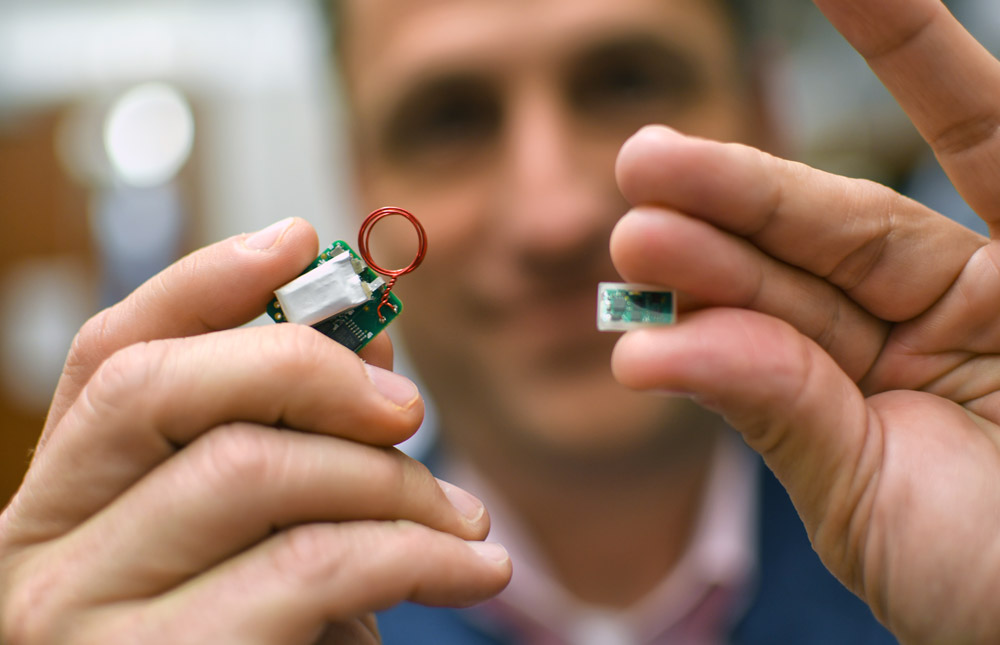 The wireless vagus nerve stimulation device (right) may be small, but it’s a big leap forward when compared to its predecessor (left). The new device is MRI-compatible and can be mass-produced on a wafer.

Bioengineering researchers at The University of Texas at Dallas recently received a $1.4 million grant from the National Institutes of Health to study the use of wireless vagus nerve stimulation (VNS) to enhance recovery after stroke.

Dr. Seth Hays, assistant professor of bioengineering in the Erik Jonsson School of Engineering and Computer Science and Fellow, Eugene McDermott Professor, along with Dr. Robert Rennaker, professor of engineering and neuroscience and the Texas Instruments Distinguished Chair in Bioengineering, have created a wireless, low-cost clinical-grade device designed to eliminate the challenges of previous VNS devices.

“This is one of the first human-grade implants designed, developed and manufactured at a university,” said Rennaker, associate director and chief technology officer of the Texas Biomedical Device Center at UT Dallas.

The NIH funding will be used for final testing of the new device before it moves on to clinical trials necessary for Food and Drug Administration approval.

Hays, who is also director of preclinical research for the Texas Biomedical Device Center, has previously studied the use of VNS for stroke and found that a combination of the stimulation therapy plus rehabilitation may enhance recovery.

The use of vagus nerve stimulation paired with rehabilitation — an approach called targeted plasticity therapy — was invented at UT Dallas by Dr. Michael Kilgard, professor of neuroscience, the Margaret Fonde Jonsson Professor, and the executive director and chief science officer for the Texas Biomedical Device Center. 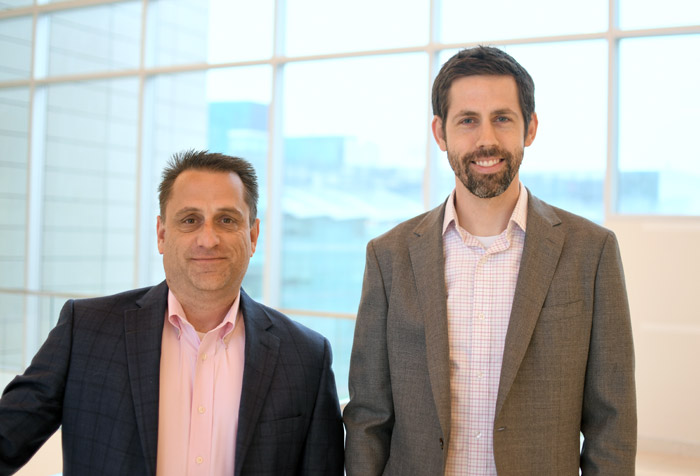 “The stimulation enhances the patient’s neuroplasticity, which can make the combined stimulation and rehabilitation three times more effective over traditional rehabilitation alone,” Hays said. “The key is doing both at the same time. This is a fundamentally different approach — giving the brain the boost it needs to rewire itself, capitalizing on a similar approach as vaccine technology.”

Hays, Rennaker and Kilgard are developing VNS for several types of treatment-resistant neurological injury, including stroke, brain hemorrhage, traumatic brain injury and spinal-cord injury. VNS, however, is limited by the fragility, large size and high cost of the implanted device. For stroke patients, who need to have regular MRIs, the devices can interfere with their treatment.

“The original devices are big, and you can’t use them for a traditional MRI,” said Hays, the principal investigator on the grant. “We got rid of the leads and battery, then made them 50 times smaller.”

Production of the new wireless VNS device is cheaper and can be done entirely through automated processes without human contact. The devices are created with a wafer and then hermetically sealed between two layers of glass for protection. Zyvex Labs, a Richardson company founded and led by UT Dallas Distinguished Alumnus Jim Von Ehr MS’81, lasered, welded and cut the glass plates.

Once the new wireless device receives FDA approval, it is expected to expand both access and ease of use, particularly because it is compatible with traditional MRI. Additionally, patients would be able to use the VNS remotely as they complete rehabilitation exercises at home, using a mobile app with wireless connectivity.

Throughout the device’s development at UT Dallas, the process has provided numerous learning experiences for bioengineering students. According to Rennaker, who has worked on applying the technology to other health conditions, including tinnitus and post-traumatic stress disorder, dozens of undergraduate and graduate research projects are guiding the technology.

“We have student workers learning the process of FDA trials,” he said. “Over 500 students have been trained in the laboratory, and it currently supports 12 PhD candidates and postdoctoral fellows. Each student is working on some aspect of the project. It’s been a unique, collective effort.”

The team has worked with physicians at UT Southwestern Medical Center, as well as rehabilitation therapists at Baylor Scott & White Health.

In addition to federal grants, the research has been supported by philanthropy, including a 2016 gift of $2 million from the W.W. Caruth, Jr. Fund at Communities Foundation of Texas, which “allowed us to develop the original prototype,” Rennaker said.

“It has cost around $6 million to complete the research at UT Dallas, as compared to $30 million in a typical commercial research setting,” Rennaker said. “As a top-tier national research institution, we now have the tools to carry this project to completion.”