When Larry Zacharias took over as chief of police at The University of Texas at Dallas in 2009, he brought more than three decades of law enforcement experience and an outgoing relational style that has raised visibility for the department and enhanced its rapport with the campus community. 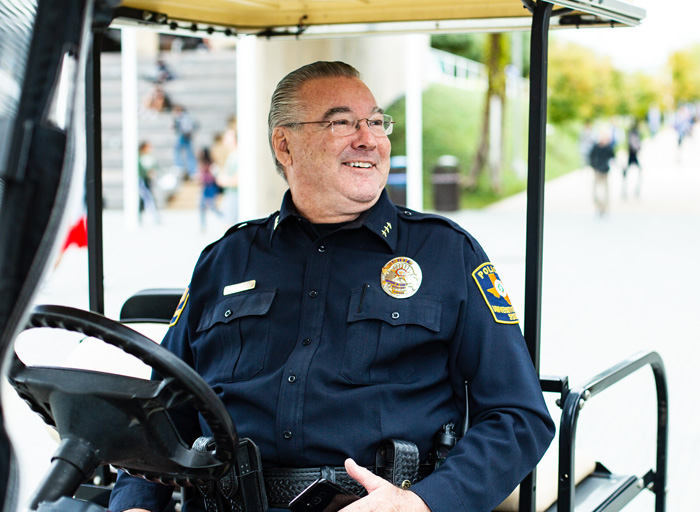 UT Dallas Police Chief Larry Zacharias has worked to raise the visibility of his department with his frequent stops around campus.

His efforts over the last decade have garnered him the 2019 Police Chief of the Year award from the UT System Police. It is the second time Zacharias has received that recognition; he also was honored in 2011.

Zacharias was recognized for his initiative in nurturing partnerships across campus and growing his department from just a handful of staff working 12-hour shifts to more than 70 law enforcement and civilian professionals. He also has encouraged student leadership as a sponsor for the University Emergency Medical Response team, a group of student emergency medical technicians that has been recognized with a statewide award for first responders.

“Chief Zacharias is the consummate law enforcement leader who truly embraces his role and obligation to ensure the public safety of the UT Dallas community,” said Michael J. Heidingsfield, director of police for the UT System. “He has assembled a cadre of police professionals who can manage any situation that should arise and who are proud to protect UT Dallas.”

At 6 feet, 1 inch tall with a booming voice, Zacharias is a familiar face around campus. He can be found chatting with students from his parked police cart near the Plinth or cheering on student-athletes at UT Dallas sports events. Dressed in his navy blue police officer uniform and chief’s badge, he is a mainstay at commencement ceremonies, Family Day and other special events on campus. Students know him from his campus safety talks at every student orientation.

“The campus learns about the police department through me. They know me, and I know a lot of them,” Zacharias said. 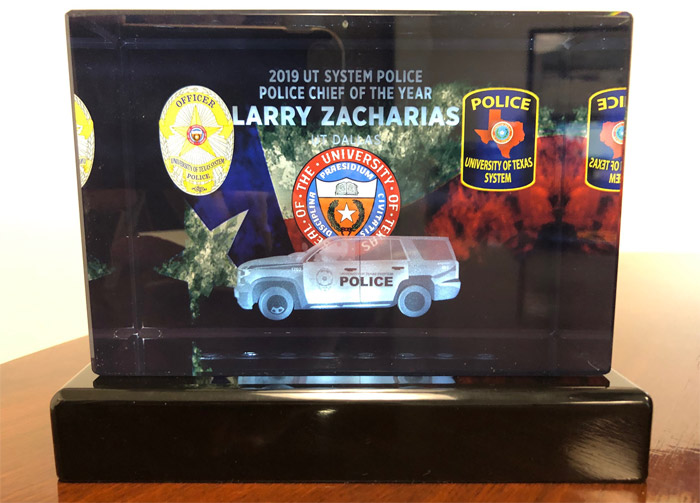 “Chief Zacharias is the consummate law enforcement leader who truly embraces his role and obligation to ensure the public safety of the UT Dallas community. He has assembled a cadre of police professionals who can manage any situation that should arise and who are proud to protect UT Dallas.”

Michael J. Heidingsfield, director of police for the UT System

He has become one of the biggest fans of Comet Sports. Zacharias makes it a point to get to know both student-athletes and their parents. He even hosts annual barbecue dinners at his home for the University’s basketball and volleyball teams and has been known to attend out-of-town games. Several teams have presented him with championship rings with his name on them whenever they bring home a trophy.

“It has been fun,” he said. “I don’t follow other sports, but I’m a UTD athletics fan. Division III athletes have a higher GPA than other student groups, and they don’t get scholarships, so they’re volunteering their time on top of keeping up with all their studies. I just really respect that. I always say if you want to see a true team sport, go watch a Division III game.”

Zacharias came to the UT Dallas Police in 2009 after retiring from a 31-year career with the Richardson Police Department that included his appointment as chief in 2002. In that role, he managed 250 employees and a $20 million annual budget.

A graduate of Sam Houston State University and the FBI National Academy, Zacharias received the Texas Police Chiefs Association’s (TPCA) Career Achievement Award in 2008. He was legislative director for the TPCA and a board member for the Institute for Law Enforcement Administration and the North Texas Regional Computer Forensics Laboratory.

Zacharias knew he didn’t want to just put his experience on the shelf when he retired. While searching the UT Dallas job listings for his wife, who was interested in making a career change, Zacharias came across an opening for the University’s chief of police. For Zacharias, a longtime Richardson resident, the decision was a no-brainer. The campus was practically in his backyard.

Zacharias has since built a cohesive team of professionals and added the latest technology to coordinate assignments and track the department’s resources in response to calls. The new Computer Information Systems (CIS) Computer Aided Dispatch System enables dispatchers to easily access real-time information and report on incidents using mobile equipment.

His seasoned management style focuses on treating people well: Hire the right people; hire for attitude and train for skills; treat your employees the best, and they’ll pass that on to others. Zacharias trained his team to be proactive and visible on campus rather than just respond to incident calls. He tells his staff, “If someone calls you with a problem, do what you need to do to fix it.”

“In a city department, you deal with someone and may never see them again. On a campus, we see the same people over and over. It really is a relationship and a partnership,” Zacharias said.

His staff now includes an assistant chief, three lieutenants, four sergeants, patrol officers, a criminal investigations team, dispatchers and civilian public safety officers. They have been trained to de-escalate situations and often refer minor complaints to the dean of students.

“The culture of service and partnership that Chief Zach has cultivated in his department is evident daily in how he and his officers interact with our community. While we have long appreciated the excellence he brings to our campus, it is gratifying to see him recognized by his peers with this award,” said Rafael Martín, vice president and chief of staff. 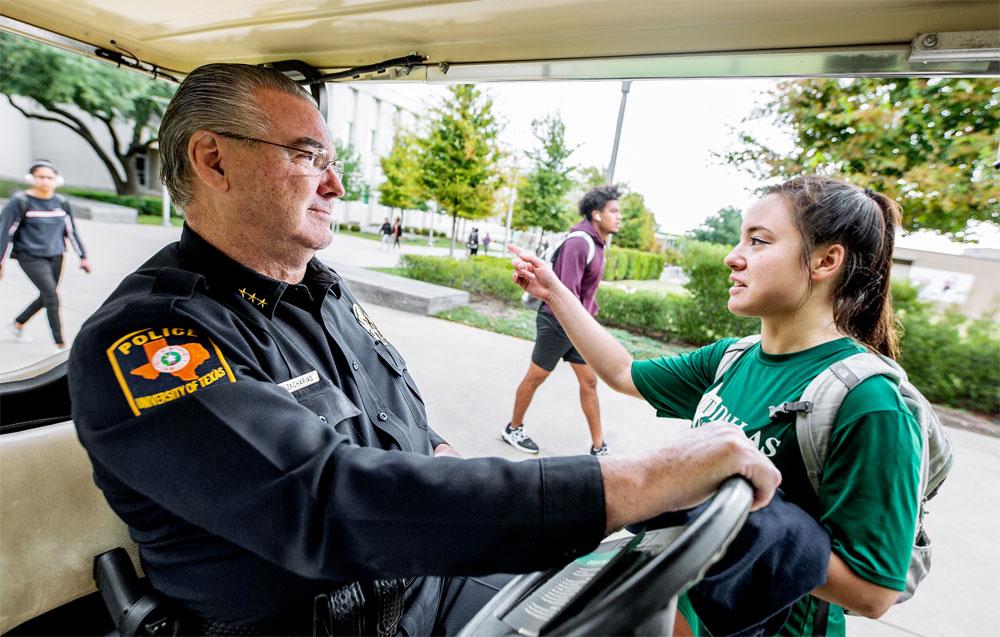 Zacharias chats with UT Dallas biochemistry senior and volleyball player Jillian Via while making his rounds on campus. The police chief is a big supporter of the Comet sports teams.