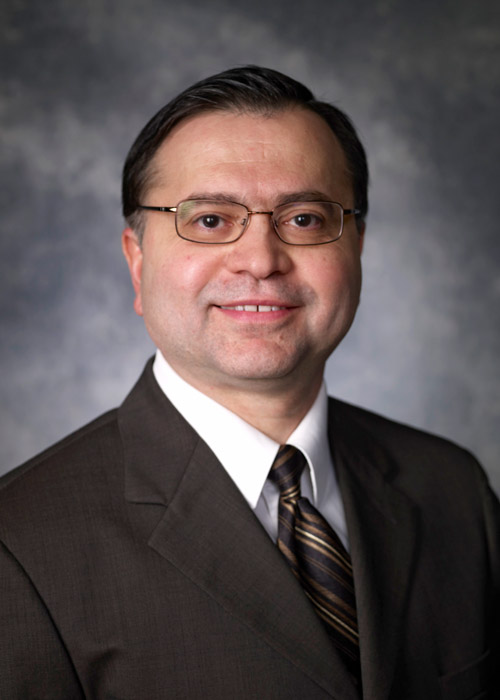 Dr. Naofal Al-Dhahir, the Erik Jonsson Distinguished Professor of electrical engineering at The University of Texas at Dallas, was named a fellow of the National Academy of Inventors (NAI), the highest professional distinction given to academic inventors.

The Erik Jonsson School of Engineering and Computer Science researcher is one of 175 inventors from 115 research universities and institutes worldwide who will be inducted at the 10th annual meeting of the NAI in June in Tampa, Florida. The NAI has 1,288 fellows worldwide representing more than 250 universities and governmental and nonprofit research institutes.

Al-Dhahir’s work focuses on improving the speed and reliability of broadband communication systems, which send signals over wide bands of frequencies. The wider data pipeline increases bandwidth, or volume of information that can be sent, and the speed of data transmission, but it typically experiences more interference than communication systems that transmit over fewer frequencies. Al-Dhahir, who holds 43 patents, has developed algorithms to mitigate noise and interference in broadband systems and a channel shortening equalizer, which decreases the lag between when a signal is sent and when it arrives across longer distances.

As a graduate student at Stanford University, Al-Dhahir became interested in communications technology while taking courses from Hitachi Professor Emeritus of Engineering Dr. John Cioffi, who is also CEO and chairman of the board of Adaptive Spectrum and Signal Alignment, whose pioneering research was instrumental in developing and standardizing the digital subscriber line modems that made internet access widely available. Al-Dhahir worked at the General Electric Company Research and Development Center, and at AT&T’s Shannon Labs for nine years before joining UT Dallas in 2003.

Al-Dhahir was elected an Institute of Electrical and Electronics Engineers (IEEE) fellow in 2008. He was a co-recipient of four IEEE best paper awards, including the Donald G. Fink Award, and received the 2019 IEEE Signal Processing and Computing for Communications technical recognition award. He also served two terms as editor-in-chief of IEEE Transactions on Communications.

“I would like to thank all of my mentors, collaborators and students over the last 30 years. Successful collaborations are ones in which the whole is more than the sum of the parts. That’s what I try to instill in my students.”

Al-Dhahir, who serves as associate department head for undergraduate education for electrical and computer engineering at UT Dallas, said he is grateful for the supportive environment at the University.

“I would like to thank all of my mentors, collaborators and students over the last 30 years. Successful collaborations are ones in which the whole is more than the sum of the parts,” he said. “That’s what I try to instill in my students.”

Al-Dhahir said his inspiration comes from his father, now a retired mathematics professor.

“He always told me: ‘Whatever you do in life, always leave things better than you found them,’” Al-Dhahir said. “That’s what I try to do every day, whether through teaching, research or service.”