Dr. John Hoffman, professor emeritus of physics and founding faculty member of The University of Texas at Dallas, died Feb. 3. He was 91.

Beginning in the 1960s, Hoffman designed and built scientific instruments for satellites, planetary missions and other space probes for experiments that traveled millions of miles throughout the solar system. His mass spectrometers — instruments that measure the characteristics of atoms and molecules found in atmospheres and soils — helped explore Halley’s comet; accompanied Apollo 15, 16 and 17 astronauts to the moon and the Pioneer mission to Venus; and aided in the discovery of water on Mars.

In 1966 he joined the atmospheric and space sciences research group at the Graduate Research Center of the Southwest (GRCSW), which became UT Dallas in 1969. In addition to teaching, Hoffman was a member of the William B. Hanson Center for Space Sciences, which is part of the Department of Physics in the School of Natural Sciences and Mathematics. He retired in 2017. 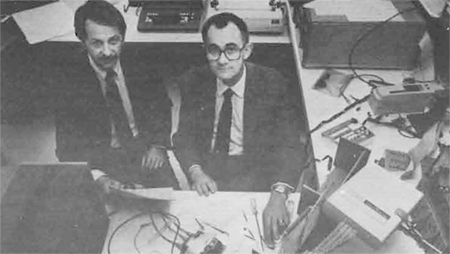 Dr. R. Richard Hodges Jr. (left) and Dr. John Hoffman, in their laboratory in 1983, worked together on the lunar orbital mass spectrometer that was aboard the Apollo 16 mission in 1972.

“In the early days of space sciences at UT Dallas, John Hoffman built a large number of space experiments for operation at Earth, the moon, Mars, Venus and comets. He provided a foundation for the international reputation in space experimentation that UT Dallas enjoys today,” said Dr. Roderick Heelis, who joined UT Dallas in 1972 and is director of the Center for Space Sciences and Distinguished Chair in Natural Sciences and Mathematics. “His devices performed with such predictable reliability that he was the ‘go-to guy’ whenever key discoveries of the elemental gas concentrations in planetary environments were required.”

In a 2009 interview, Hoffman described growing up with both music and physics; his father was a chemistry professor, and his mother an accomplished pianist. He picked up the clarinet and eventually the oboe, but he said he had a “big fight” with himself trying to decide whether to pursue science or music. Ultimately, he received his bachelor’s degree in physics from St. Mary’s University of Minnesota, as it is now known, and his master’s and doctoral degrees from the University of Minnesota. Hoffman’s mentor there was Dr. Alfred O.C. Nier, who pioneered the development of mass spectrometry.

In Memoriam
of Dr. Hoffman

To make a memorial gift to UT Dallas in memory of Hoffman, please visit giving.utdallas.edu/hoffman.

As a member of NASA’s Phoenix Mars Mission in 2008, Hoffman designed a mass spectrometer for the lander that analyzed gases from soil samples on the red planet, which shed light on Mars’ atmosphere and climate history.

He also designed mass spectrometers that flew on NASA’s Atmosphere Explorer C and D satellites. Also on board was an instrument designed by Hoffman’s brother, Robert, who was a space scientist at NASA’s Goddard Space Flight Center.

“I’ll never forget hearing John speak and show mass spectrometer data coming back from the moon’s surface live during my very first week at UT Dallas in September 1972,” said Dr. A. Dean Sherry, professor of chemistry and the Cecil H. and Ida Green Distinguished Chair in Systems Biology. “Needless to say, John had a huge influence on all young faculty who came to the University over many decades. He will never be forgotten.”

Hoffman served as head of the Department of Physics from 1978 to 2001 and was associate dean for undergraduate education from 2000 to 2009. He also was president of the Texas Section of the American Association of Physics Teachers from 1993 to 1995 and was UT Dallas’ representative to the Texas Space Grant Consortium from 1992 to 2006.

“John was not just an instrument builder, he was also an outstanding communicator. … Unselfish engagement with his peers and students alike is the reason that John became so successfully immersed in the growth of the University from its original days. We will miss the many contributions made by John in so many areas. But what a joy to look back on all his accomplishments and to recognize that his contributions are permanently embedded in the work we do today.”

Dr. Roderick Heelis, director of the William B. Hanson Center for Space Sciences and Distinguished Chair in Natural Sciences and Mathematics at UT Dallas

“I thoroughly enjoyed my conversations with Professor Hoffman, and I marveled at his many accomplishments as a scholar and educator,” said Benson, who holds the Eugene McDermott Distinguished University Chair of Leadership. “My first such meeting was in 2016 when he and Professor Carter came to my office to extend the singular, and utterly delightful, tradition of resting class rings in a box of simulated lunar regolith before issuing the rings to the students who would wear them. I was struck by the whimsey of the tradition and the obvious affection that Professors Carter and Hoffman had for our students.” 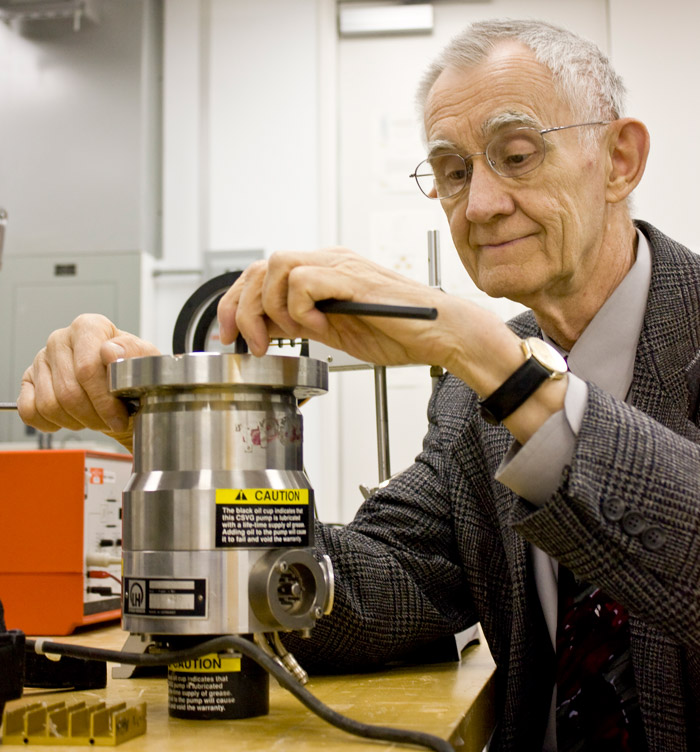 In addition to his teaching and research, Hoffman was very active in science outreach, participating in physics demonstrations and hands-on activities for children and the public on campus, in schools and in the community. Hoffman was not only a member of the team that flew a mass spectrometer on the European Space Agency’s Giotto mission to Halley’s comet in 1986, he also flew with colleagues on a Braniff International Airways special flight to show the passengers a better view of the famous comet than could be obtained from the ground.

“John was not just an instrument builder, he was also an outstanding communicator,” Heelis said. “Many have enjoyed the motivational talks about his research work as well as his explanations of fundamental physical processes illustrated with lively demonstrations. Unselfish engagement with his peers and students alike is the reason that John became so successfully immersed in the growth of the University from its original days.

“We will miss the many contributions made by John in so many areas. But what a joy to look back on all his accomplishments and to recognize that his contributions are permanently embedded in the work we do today.”