Dr. David Lumley’s connection to University of Texas at Dallas co-founder Cecil H. Green began years ago, when Lumley was studying for his PhD.

Lumley met Green through his advisor, who was Stanford University’s Cecil Green Professor of Geophysics at the time. Lumley discovered that he and Green grew up in the same city and attended the same university as undergraduates. Now, the UT Dallas professor has another tie to Green: He has been named the Cecil H. and Ida M. Green Chair in Geophysics.

“With a shared background as a native of Vancouver, an alumnus of University of British Columbia and our attachment to seismology, it’s my great honor to hold this chair at UT Dallas,” Lumley said at the 2019 University Investiture Ceremony.

Lumley was among 12 faculty members to be honored at the ceremony, where they were recognized before their families, colleagues, mentors and students. The faculty members hold professorships and chairs in the Office of Graduate Education, School of Behavioral and Brain Sciences, Erik Jonsson School of Engineering and Computer Science, Naveen Jindal School of Management and the School of Natural Sciences and Mathematics. 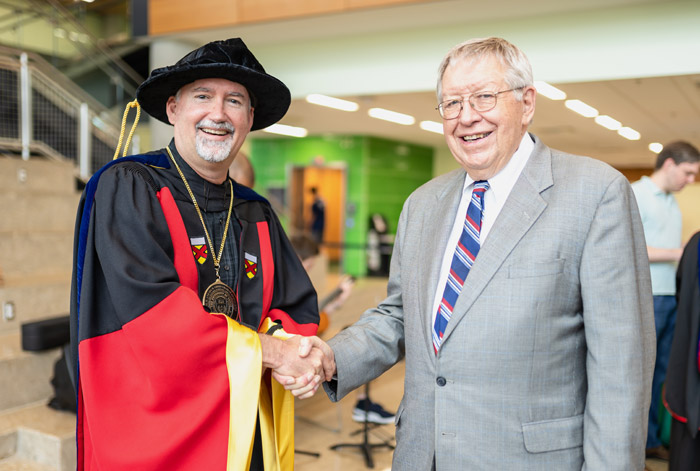 Dr. David Lumley (left) shakes hands with Rust E. Reid, former trustee of the Cecil and Ida Green Foundation, at a reception after the Investiture Ceremony. Lumley was honored as the Cecil H. and Ida M. Green Chair in Geophysics.

The honorees were each introduced by a student speaker before receiving a medallion from University President Richard C. Benson and Dr. Inga Musselman, vice president for academic affairs and provost.

Considered the highest academic honor a university can bestow, chair and professorship endowments provide senior-level faculty with funds to advance their scholarly activities and support research. UT Dallas has more than 130 chairs and professorships. Investitures are among the oldest traditions in academia, dating back more than 500 years. During the ceremony, honorees and ceremonial participants don full academic regalia.

The endowed chairs and professorships are made possible by philanthropic donations, with several established by or honoring the University’s founders and early leaders.

Dr. Juan E. González was named the first Francis S. Johnson Chair for Graduate Education, which honors Johnson for his service as graduate dean in the University’s early years.

Other new endowments came from faculty and alumni, including Mike Redeker MBA’97, MA’01 who established the Mike Redeker Distinguished Professorship in Management, and Dr. Joseph Picken, former executive director of the Institute for Innovation and Entrepreneurship at UT Dallas, who contributed funds upon his retirement as clinical professor to establish the Dr. Joseph Picken Distinguished Professorship in Innovation and Entrepreneurship.

“Dr. Møller has revolutionized the care of neurosurgical patients around the world,” Small said. “I want to thank Aage for this tremendous honor.”

Dr. Özalp Özer is the first George and Fonsa Brody Professor in Management, which was established to support the research and scholarly activities of the holder in the Jindal School. Retired business owner George Brody, who attended the ceremony with his wife, Fonsa Brody, serves on the Naveen Jindal School of Management Advisory Council.

“I’m delighted to be a recipient of this investiture,” Özer said. “I would like to congratulate all the recipients for their outstanding research and teaching accomplishments and the donors for investing in the future of humanity.”

Faculty members were introduced by students, some of whom now teach at other institutions across the globe. Bharadwaj Kadiyala PhD’17, who introduced Özer, is now an assistant professor of operations management at the Hong Kong University of Science and Technology.

“Dr. Stecke was instrumental in my studies and my career path in the academic world, where I frequently recall what I learned as a student,” Zhao said.

When it was Lumley’s turn to be invested, the professor offered thanks to the University, his family and his students.

“The best part of our jobs is working with students,” Lumley said. “I want to thank my graduate students past, present and future. They truly make it fun to come to work every day.”

School of Behavioral and Brain Sciences

School of Natural Sciences and Mathematics