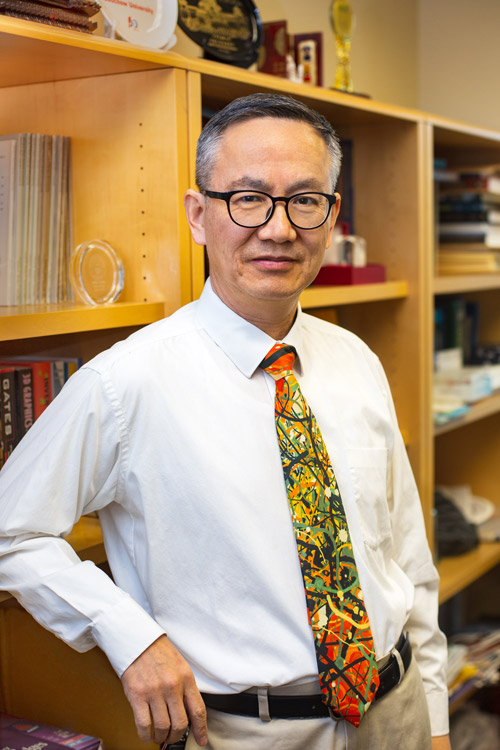 It took years for Pablo Picasso to perfect his style. Now, a University of Texas at Dallas computer science professor is developing algorithms to generate unique images that mimic the cubist pioneer’s paintings in seconds.

Dr. Kang Zhang uses artificial intelligence (AI) to teach computers to create illustrations in the style of the famous masters: Jackson Pollock and his paint splatters or Joan Miró and his curved shapes and sharp lines. The process involves feeding computers examples of colors, abstract shapes and layouts so they can learn to produce their own versions of masterpieces.

Zhang, a professor of computer science and director of the Visual Computing Lab in the Erik Jonsson School of Engineering and Computer Science, uses computer science to study fine art — and he uses fine art to find ways to make better computer visuals.

He recently returned from the Czech Republic, where he spent last fall lecturing and conducting research at Charles University in Prague as a Fulbright Distinguished Chair. Zhang also traveled to Poland, Germany and Serbia to give presentations on his project, “Design and Experiment of Multi-Dimensional Information Visualization and Aesthetic Representations.”

“The computer can be a tool to develop beautiful and user-friendly designs for just about everything we see on our screens,” Zhang said. “The goal is to have art and design help computing. User interfaces, for example, are supposed to be friendly and beautiful, but they are often created by computer scientists with only function in mind.” 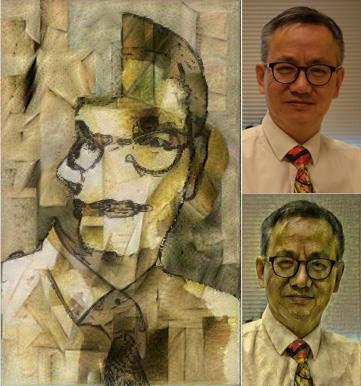 Zhang, who has written textbooks on the subject and lectured across the globe, is an expert in computational aesthetics, a subfield of AI that involves applying mathematical formulas to represent and analyze aesthetic features. He said the technology can help software and web developers produce better computer-generated graphics, user interfaces and visualizations of big data.

Generating visuals in the style of abstract artists involves an AI function called deep learning, which teaches the machine to process information and recognize patterns the way a human brain does and perform tasks without explicit instructions.

Zhang’s process involves splicing images, building computer models of irregular shapes, encoding the designs and writing algorithms to let the computer take over and weave the colors, layouts and shapes into new creations. For example, he and his colleagues and students have published articles in the journal The Visual Computer describing how they transformed portraits into Picasso’s cubist style and modeled Pollock’s dripping style of painting. They have also delivered conference presentations detailing a method for generating Miró’s surrealism.

In addition to generating better visuals, computational aesthetics increasingly is being used to analyze art in new ways. For example, Zhang’s study in the April 2019 edition of the journal Leonardo examined the white space in artist Wu Guanzhong’s paintings. Leaving white space by not painting over the white rice paper is typical in Chinese painting. When Zhang and the study’s co-authors collected data on viewers’ eye movements and asked viewers to rate the artwork based on various features, the researchers found that the white space in Wu’s work had a significant effect on viewers’ aesthetic experiences.

Zhang developed a passion for art while growing up in China and has won awards for his oil paintings and Chinese calligraphy. Throughout his career, he has incorporated art into his research, which, he emphasized, explores how computers can serve as tools — not replacements — for creativity.

“Computer science will not replace artists and designers,” Zhang said. “Rather, it can help both groups extend their imaginations and capability in making creative works.”

Voskuil, associate dean of humanities, fine and performing arts at Richland College in Dallas, was part of a group of 12 college administrators who traveled to France to see firsthand how international education is managed. 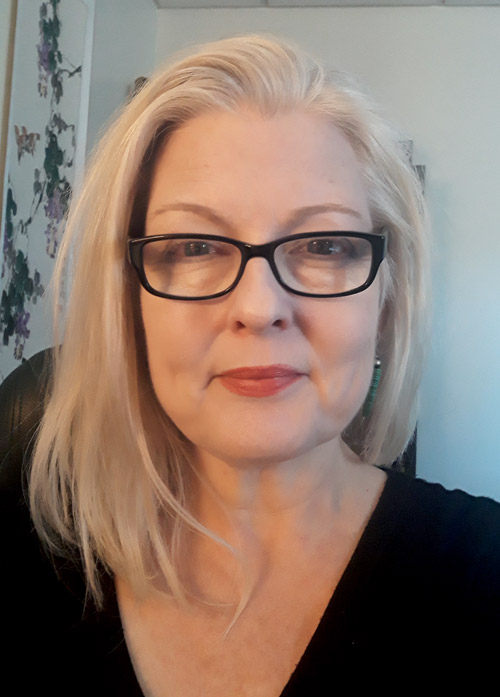 “I felt as if I had taken an entire course in two weeks,” she said. “France’s attitude toward education is very inclusive; anyone who earns a baccalaureate degree there is promised a place at a university or in higher education. It’s quite different from the way we do it, but it’s really a wonderful system.”

Voskuil’s travel grant was part of the Fulbright International Education Administrators program. Recipients are chosen based on academic and professional achievement, as well as a record of service and demonstrated leadership in their particular fields.

After earning her doctoral degree from UT Dallas, Voskuil served in education roles in a number of developing and post-conflict countries, including Afghanistan, Cambodia and Bosnia-Herzegovina. She began her appointment at Richland in 2015.

Voskuil said it is important for educators, as well as students, to learn from each other.

“Global learning and cross-cultural understanding are very important for student success in the workplace and for the success of our country and our world. Unfortunately, most people from developing countries or post-conflict countries can’t really afford to go abroad and only about 1% of American students actually study abroad,” she said. “So to really encourage diversity and a global perspective, we need to find better ways to make international education available to everyone.”