Dr. Louis “Bob” Hunt, professor emeritus of electrical and computer engineering who conducted research for NASA and helped launch the Erik Jonsson School of Engineering and Computer Science at The University of Texas at Dallas, passed away Jan. 28. He was 78.

Hunt was known for his pioneering work in the 1980s that paved the way for dynamic control systems that make operations such as automated flight control possible. Hunt, who retired in 2009, was a beloved instructor who received in 2003 a UT System Chancellor’s Council Outstanding Teaching Award. He was also a fellow of the Institute of Electrical and Electronics Engineers (IEEE).

“Dr. Hunt was world renowned for his work in applied mathematics and nonlinear control theory,” said Dr. Lawrence J. Overzet, department head and professor of electrical and computer engineering (ECE). “He actively promoted the growth of ECE and was an extraordinary educator at all levels.”

Dr. Mark W. Spong, Excellence in Education Chair, said the publication of Hunt’s and his co-authors’ highly cited 1983 paper on nonlinear systems was a “watershed event” in the field.

“This work was a major development, and many people subsequently applied this idea in areas such as robotics, electric motors, vehicles and so on,” said Spong, professor of systems engineering and of electrical and computer engineering and former dean of the Jonsson School.

“Dr. Hunt was world renowned for his work in applied mathematics and nonlinear control theory. He actively promoted the growth of ECE and was an extraordinary educator at all levels.”

A co-author of that paper, Dr. Renjeng Su, who is now a professor at Portland State University, also worked with Hunt at NASA’s Ames Research Center in the early 1980s.

“There, Bob and I began our research collaborations,” Su said. “At Ames, we worked together on a single focus and with an unforgettable intensity. It was a new experience for me, working with a senior researcher who was so encouraging, generous and kind, always ready for intellectual engagement. Our collaborations continued for many years. Our friendship lasted forever. The time with Bob and the work we did had changed my life. I know Bob will have a permanent place in my memory.”

Hunt joined UT Dallas as a mathematics professor in 1984 and two years later helped form the Jonsson School. In addition, he served as department head of mathematical sciences from 1992 to 1994. 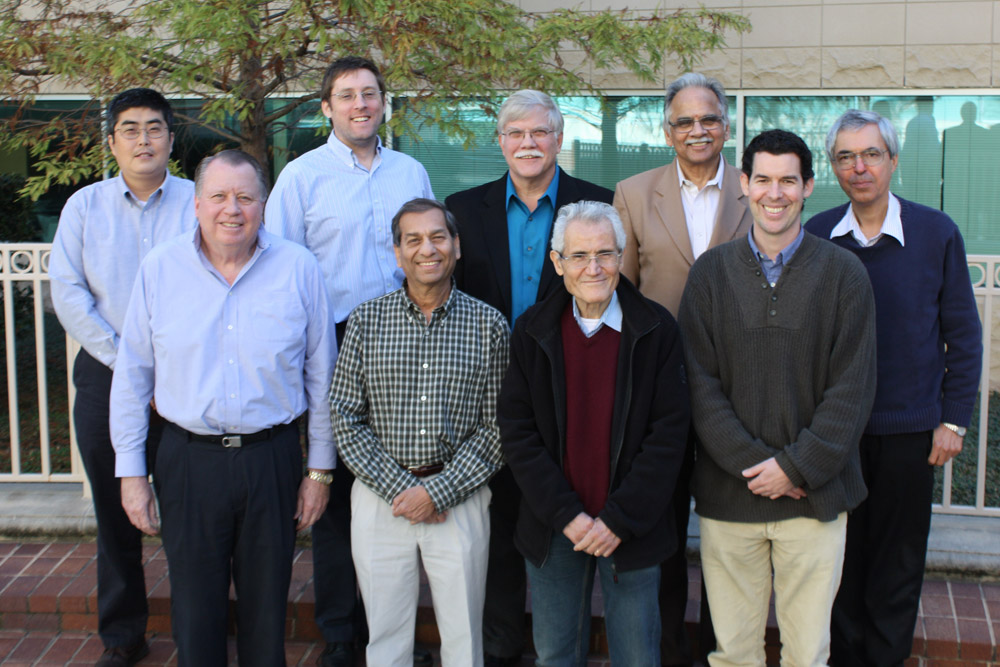 Dr. Louis “Bob” Hunt (front row, left) is shown with fellow members of the Center for Control Science and Technology at UT Dallas in 2012. The center includes researchers from the Erik Jonsson School of Engineering and Computer Science, the Naveen Jindal School of Management and the School of Natural Sciences and Mathematics.

“He was extremely generous to all his colleagues, especially junior ones, and students with his prodigious knowledge,” said Dr. Viswanath Ramakrishna, professor of mathematical sciences in the School of Natural Sciences and Mathematics. Ramakrishna worked with Hunt as part of a team that received a $1.75 million Defense Advanced Research Projects Agency grant in 2008 to develop advanced microchip technology.

In nominations for his teaching award in 2003, students praised the professor’s ability to explain concepts, writing: “Dr. Hunt’s door is always open, even to questions about courses he is not teaching.”

After his retirement, Hunt and others formed a company, Cirasys, through the UT Dallas Venture Development Center to develop technology they invented and patented to convert power from sources such as wall plugs or batteries into voltage needed by electronic devices. Fellow co-founders included Dr. Poras Balsara, associate dean for academic affairs and professor of electrical and computer engineering; Dr. Dinesh Bhatia, professor of electrical and computer engineering; and Robert J. Taylor PhD’04. 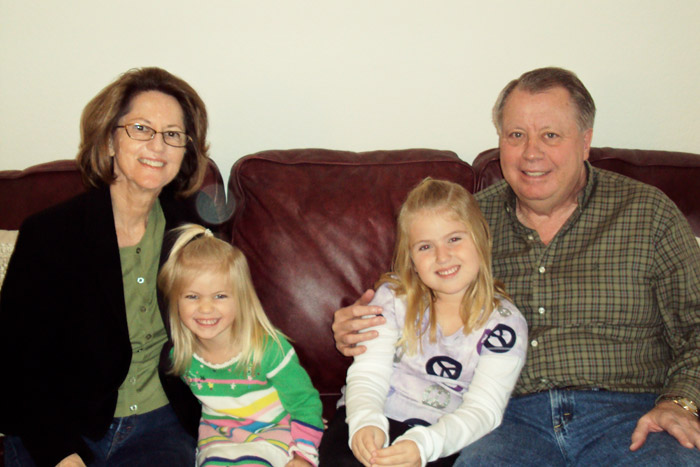 Dr. Louis “Bob” Hunt with his wife, Rogene, and granddaughters Allison (second from left) and Jennifer Missimer in 2009, the year he retired from UT Dallas. (Photo courtesy of Michelle Missimer)

Michelle Missimer, Hunt’s daughter, said although his family was her father’s first love, “work was a close second.”

“As a child, I remember his Sunday mornings were spent going over his notes for the week. He loved sharing his passion for learning with his students and colleagues,” Missimer said. “Even after he retired, he still went into the office every day. I don’t think he really ever planned on stopping.”

Hunt retired to take care of his wife, Rogene Marie Hunt, who survives him. Memorials to Hunt can be made to the Alzheimer’s Association in her honor.

“The devotion he showed to my mother these last seven and a half years is just another example of his desire to put everyone else first. He gave up the career he loved for his even greater love for his wife,” Missimer said. “My brother, Todd Hunt, and I are so incredibly honored to call him ‘Dad.’ We love and miss him so much. There is an emptiness inside of us that will never be filled.”