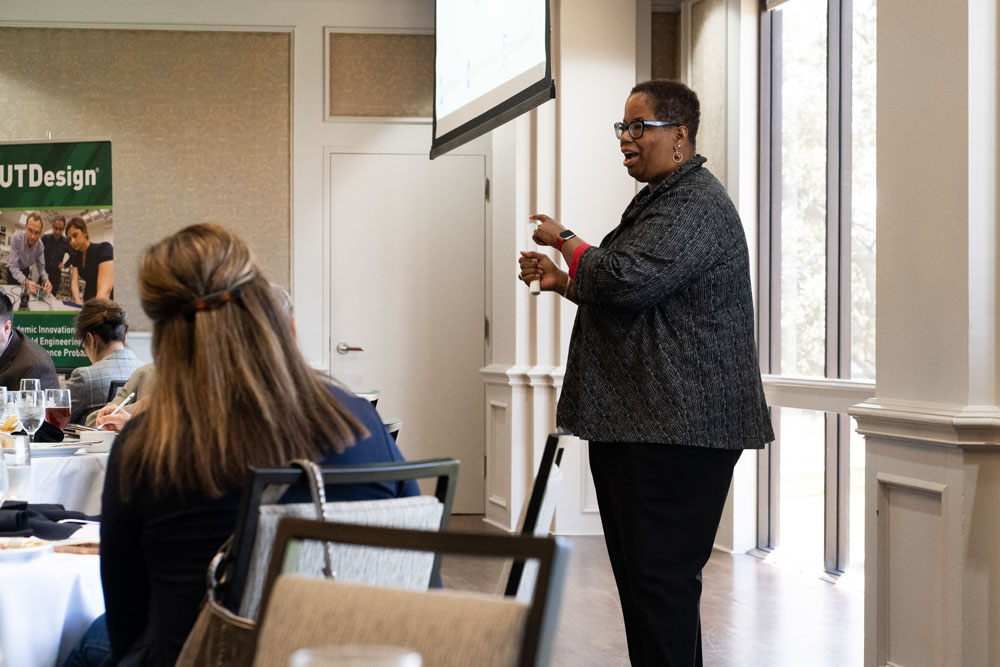 Universities need greater involvement from industry to teach future engineers the skills they will need to tackle challenges such as climate change, cybersecurity, and providing food and clean water to a growing global population.

That was the sentiment expressed by Dr. Stephanie G. Adams, dean of The University of Texas at Dallas’ Erik Jonsson School of Engineering and Computer Science, to an audience of North Texas technology leaders at a recent luncheon.

“There are no clearly defined solutions to these problems,” Adams said at the March 6 event, which was sponsored by Tech Titans, a technology association for North Texas. “Our task is to produce an engineer who is agile and flexible in their thinking and brings a variety of perspectives to the problems you’re asking them to solve.” 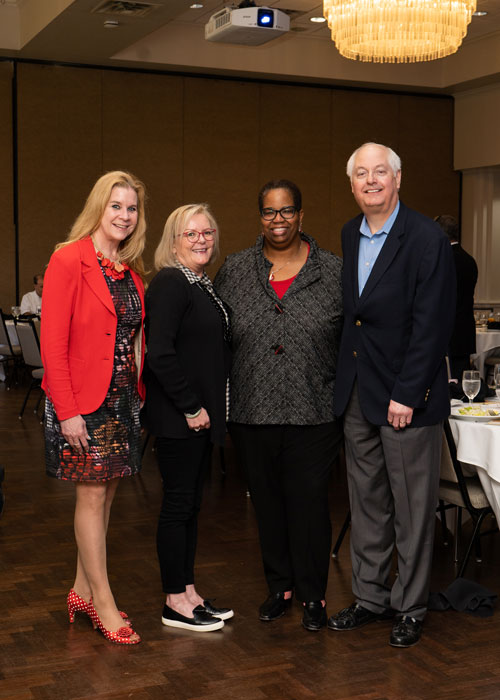 Adams, the Lars Magnus Ericsson Chair at UT Dallas and president of the American Society for Engineering Education, said engineering schools must adapt to new trends and educational approaches to prepare students for the world they will inherit rather than the one that exists today.

“I tell young people when I talk to them: ‘The jobs you’re going to have in seven years haven’t been created yet,’ ” Adams said.

In her speech, titled “Transforming Engineering: Industry’s Role in Improving the Landscape,” Adams cited “The Engineer of 2020: Visions of Engineering in the New Century,” a National Academy of Engineering report that emphasizes the need for students to be creative and use critical thinking skills. She highlighted UT Dallas’ UTDesign Senior Capstone Program as an example of the type of industry-university partnership that helps students develop those skills. UTDesign gives teams of senior engineering students the opportunity to develop, test and implement concepts to solve real-world problems for business sponsors.

UTDesign helps companies expand their resources by partnering with computer science and engineering students at UT Dallas. Learn more about the benefits of becoming a company sponsor.

UTDesign teams are working on more than 200 projects, with more than 80% sponsored by companies. The students have won eight national first-place awards since 2014. Tech Titans honored UTDesign with its 2013 Tech Titans of the Future Award. The UTDesign Studio features the Texas Instruments Innovation Lab, a facility for student and faculty engineers and computer scientists, as well as a campus workspace for students who participate in a State Farm internship program.

Adams invited industry leaders to collaborate with engineering schools to develop long-term research projects, create faculty internships and serve as advisors by participating on councils and boards. She added that UTDesign needs sponsors for summer and fall projects.

“I tell young people when I talk to them: ‘The jobs you’re going to have in seven years haven’t been created yet.’ ”

Deb Sawyer, managing director at ZRG Partners who is also vice chair of the Tech Titans programs, said Adams gave a realistic look at how the National Academy of Engineering envisions educating engineers in 2020, and where universities are falling short of this vision.

“Programs such as universities’ capstone design programs, like UTD’s UTDesign Program, can fill these gaps, bringing real-world challenges into a teaching environment by coupling students with industry to better prepare them for the workplace,” Sawyer said.