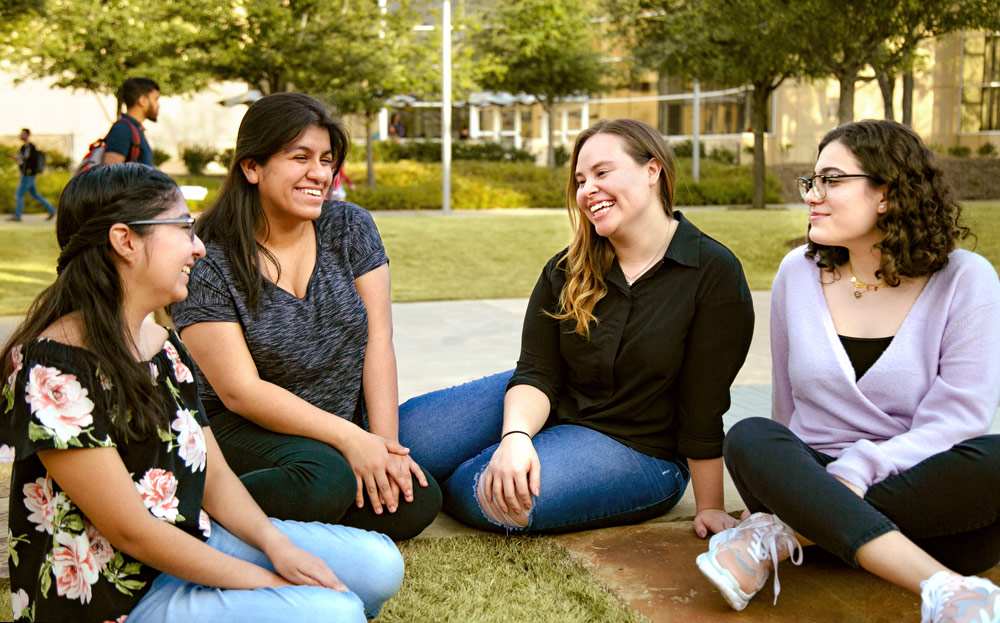 Before she even began her freshman year, Maria Valdez already had a support system on campus at The University of Texas at Dallas.

Now a senior in mechanical engineering, Valdez said the connections she made through the University’s Young Women in Science and Engineering (YWISE) Investigators program during high school helped her transition to college.

Students in the program work with mentors — UT Dallas students and faculty members, industry professionals and high school science teachers — to design, develop and implement solutions to science and engineering problems. Students on the winning teams receive scholarships. Since the program began in 2012, 244 students have participated, with many choosing to study at UT Dallas.

“I really enjoyed my relationship with my mentors, and it led me to have closer ties with my teachers and friends. My teammates are my two best friends to this day,” Valdez said.

Now that they attend UT Dallas, Valdez and some of her fellow YWISE Investigators have created an alumni group to expand their network on and off campus and support other students who participated in the program. The YWISE Investigators alumni group became an official student organization in the fall, and Valdez and fellow officers are working to recruit more members.

“The Young WISE Investigators program has created a great pipeline of students who have an interest in STEM and research. They are thriving at UT Dallas and have formed a great bond through their alumni chapter to help support each other on their path to graduation.”

The YWISE Investigators program, sponsored by the Department of Community Engagement, was created by Dr. Magaly Spector, former assistant to the provost for strategic initiatives, to inspire young women from underprivileged backgrounds in Dallas-area high schools and community colleges to pursue careers in science, technology, engineering or mathematics. The program is funded by the University, the Texas Instruments Foundation and Ericsson.

Valdez said the program was instrumental in her decision to come to UT Dallas, where she is in a fast-track program to earn a master’s degree in systems engineering and management. She said the YWISE Investigators program also led to a student job helping coordinate the program and a research opportunity in the lab of Dr. Hongbing Lu, professor of mechanical engineering, associate department head and Louis Beecherl Jr. Chair.

Samantha Montoya, a math senior in the UTeach Dallas program, serves as the alumni group’s officer for student affairs. She participated with Valdez on the same team from Dallas Independent School District’s Yvonne A. Ewell Townview Center. Their team won first place for its solution to their school’s uneven Wi-Fi access. Montoya said she looks forward to working with new YWISE Investigators.

“I wanted to help others because they’re probably first-generation college students or they don’t have siblings that went through college,” Montoya said. “We’re helping freshmen know what’s going on at UT Dallas. They can get advice from us about what we wish we knew.”

In addition to Montoya and Valdez, the group’s officers include Amira Zakrya, a healthcare studies sophomore, and Adriana Alva, an electrical engineering and computer engineering junior.

Raul Hinojosa Jr., director of community engagement, said it has been exciting to see how YWISE Investigators have formed a community of scholars based on the connections they built working on projects together in high school.

“The Young WISE Investigators program has created a great pipeline of students who have an interest in STEM and research,” Hinojosa said. “They are thriving at UT Dallas and have formed a great bond through their alumni chapter to help support each other on their path to graduation.”