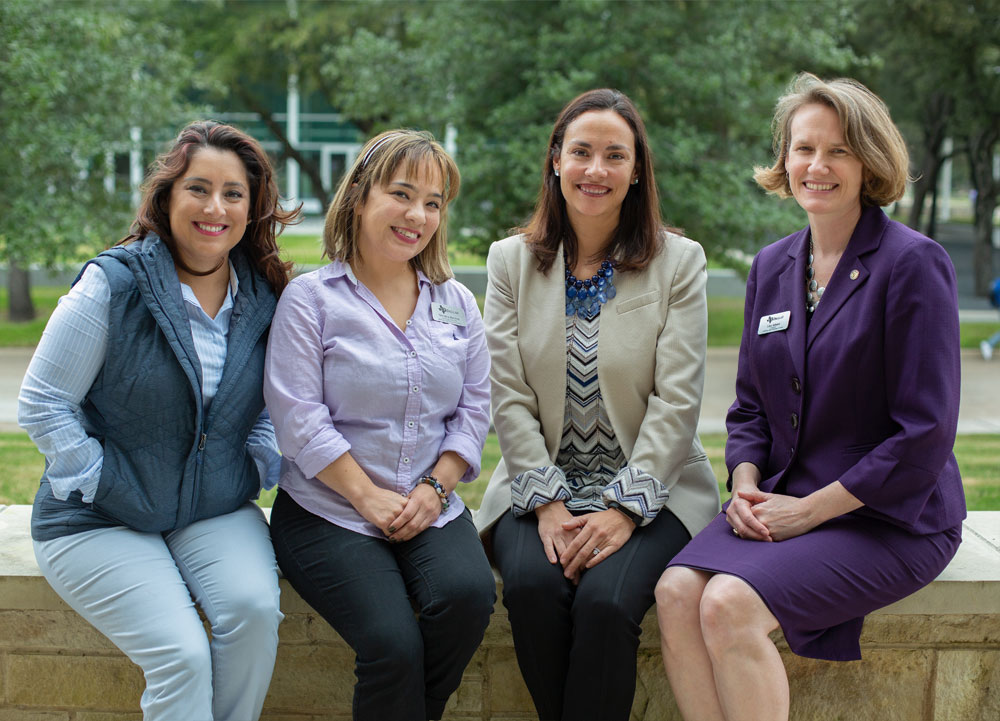 Four women veterans shared their experiences during a recent panel discussion at UT Dallas. From left: JoHanna Martinez BA’15, a Marine Corps veteran who develops recruitment strategies at AT&T; Veronica Jimenez, assistant director of the Military and Veteran Center at UT Dallas and a Texas Army National Guard combat veteran; Sandy Fusco, a former Navy flight officer who is a senior director of risk management for Capital One Auto Finance; and Lisa Adams, director of the Military and Veteran Center and a former Air Force pilot.

When Air Force veteran Bibiana Ojeda first came to The University of Texas at Dallas to study business administration, she missed the camaraderie that came with being in the military. Getting connected at the Military and Veteran Center (MVC) gave her a greater sense of belonging.

“You definitely don’t have that same camaraderie when you transition out. You’re on your own. It’s helped me being here at UT Dallas and meeting other veterans,” said Ojeda, who worked in a B-52 flying squadron and is now president of the UT Dallas chapter of Student Veterans of America.

“I do have my friends back home, but what I’ve been through and what they’re going through is completely different. They’re at a different stage in their life. So it’s nice to be here at UTD and have other student veterans. We’re all going through this together,” she said. 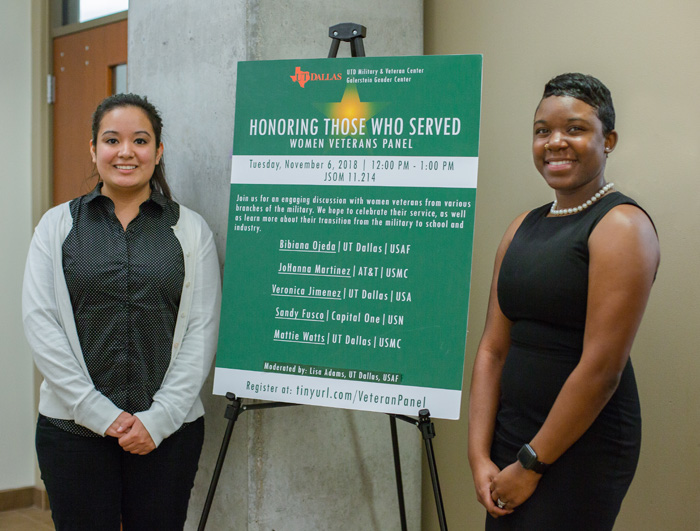 Ojeda and other women veterans recently shared their perspectives at an “Honoring Those Who Served” panel discussion. The event, sponsored by the MVC and the Galerstein Gender Center, gave the women an opportunity to share their experiences in transitioning from the military to college life and careers.

“Coming home from Iraq, I did not want to be around people. My social skills lacked a little bit. I remember thinking I need to get back out there,” she said.

When Jimenez was in college, her love of dancing prompted her to take the first steps toward getting involved with a student-led social group. She eventually became president of her community college’s salsa club and later took an on-campus job at the university she transferred to.

“Use your resources to the fullest,” Jimenez said. “As a student coming out of the military, had I had more resources and community there, I wouldn’t have felt so alone in the process.”

Faculty members can help by remembering that not every student is a traditional student, said Marine Corps veteran Mattie Watts. A former aviation electronics technician, Watts is working on her bachelor’s degree in child learning and development at UT Dallas.

“I was taking general chemistry, and I remember a classmate saying, ‘I remember this from AP Chem.’ Well, the last time I took chemistry was 2010. It was very overwhelming,” Watts said. “Sometimes professors speak as if they’re talking to students fresh out of high school. I had to work twice as hard to just catch back up.”

On the other hand, women veterans bring some hard-earned advantages to the classroom, Watts said. For example, they are used to proving themselves in a male-dominated environment. Watts recounted having to supervise men of higher rank while serving as a technician on an F/A-18 fighter jet.

“I do have my friends back home, but what I’ve been through and what they’re going through is completely different. They’re at a different stage in their life. So it’s nice to be here at UTD and have other student veterans. We’re all going through this together.”

“It was a constant battle of me having to prove myself as a female in a male-dominated field. When I did come to college, the only words I needed to say was ‘I’m a female Marine.’ The respect is automatic,” Watts said.

“Most people who do this work are men. To be able to say ‘I’m a Marine’ is always fun. Certainly no one ever guesses that. Being able to change perceptions is the best part of it,” she said. “When they find out I’ve served, and particularly what branch, it’s almost like they get nervous. It’s like a shift in energy. There’s a credibility and an amount of respect that comes with that.”

Women veterans also know how to take direct feedback without getting defensive, said Sandy Fusco, a former mission commander and Navy flight officer who is a senior director of risk management for Capital One Auto Finance in Plano. Fusco serves on the MVC Community Advisory Council.

“In the civilian world, it’s very rare to get feedback that’s direct and honest. I’m actually able to take that kind of feedback and listen and hear it. I credit my military experience for that,” she said.

“In the military, everything you do is being evaluated. It’s a very performance-based environment,” she said. “When I became a mother, things changed for me because I had a different perspective. I wasn’t as focused on the competition. I remember thinking, ‘I’ve been one of the guys for so long. What does it mean to not be one of the guys?’”

And whether it’s on the job or in the classroom, women veterans have to learn that it’s OK to ask for help, said Martinez, who also serves on the MVC Community Advisory Council.

“Don’t be uncomfortable. It doesn’t make you weak or weird. If the resource is there, just ask,” she said. “People want to pay it forward. They really do. Just ask. It makes the other person feel really good.”

The UT Dallas Military and Veteran Center provides resources and support for veterans and military-affiliated students. MVC staff are invested in seeing students achieve their academic and career goals. Here are some of the resources it offers:

Green Zone: This program aims to establish a Universitywide network of staff and faculty who will shape a military-friendly campus culture.

A complete list of the MVC’s resources can be found online.