U.S. News Ranks UT Dallas as One of Nation’s Most Diverse Campuses

UT Dallas has one of the top 25 most ethnically diverse student populations in the country, according to recent data from U.S. News and World Report.

The publication created an index comparing national colleges and universities  to identify those “where students are most likely to encounter undergraduates from racial or ethnic groups different from their own.” U.S. News factored in the total proportion of minority students after excluding international students. The data are drawn from each institution's 2012-2013 school year student body. Categories used in the calculations were black or African-American, Hispanic, Native American, Asian, Pacific Islander, white (non-Hispanic) and multiracial. Students who did not identify themselves as members of any of these demographic groups were classified as non-Hispanic whites for the purpose of the calculations.

“Diversity is important to the student experience. Students learn and grow when they are introduced to new ideas, new cultures and new experiences, and ultimately, great new innovation and discovery occur. I’m pleased that the University is fulfilling its mission as a growing and diverse institution founded on outstanding academic achievement,” said UT Dallas President Dr. David E. Daniel.

Ethnic diversity was one of three U.S. News categories in which UT Dallas performed well among a field of hundreds of other colleges and universities. The University also was ranked in the top 100 schools for highest percentage of international students and for economic diversity among students. 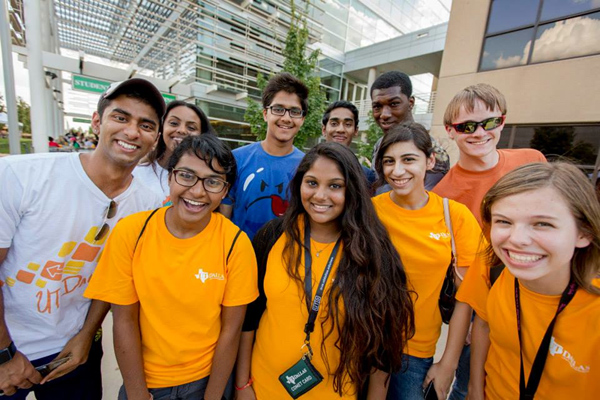 The U.S. News index sought to identify the universities  “where students are most likely to encounter undergraduates from racial or ethnic groups different from their own.”

Dr. Magaly Spector, vice president for diversity and community engagement, said the U.S. News recognition reflected the efforts of the UT Dallas leadership and of the University as a whole.

“Our goal is to promote inclusion and celebrate diversity,” said Spector. “Our office is dedicated to helping UT Dallas become a great university not only of the nation, but also of the world. Our students, faculty and staff are committed to supporting these efforts.”

Programs like the Academic Bridge Program (ABP) also have contributed to the growth of diversity on campus. ABP helps first-generation college students pursue college educations. The program guides students as they transition from high school to college through advising, mentoring and tutoring.

“Diversity has always been an important component of the ABP. The initial impetus for the founding of the program was that UT Dallas, by its very name, represents a major metropolitan area of the country,” said Dr. George Fair, dean of the School of Interdisciplinary Studies and founder of ABP. “It is a public responsibility for our students to reflect the diversity of the area.”