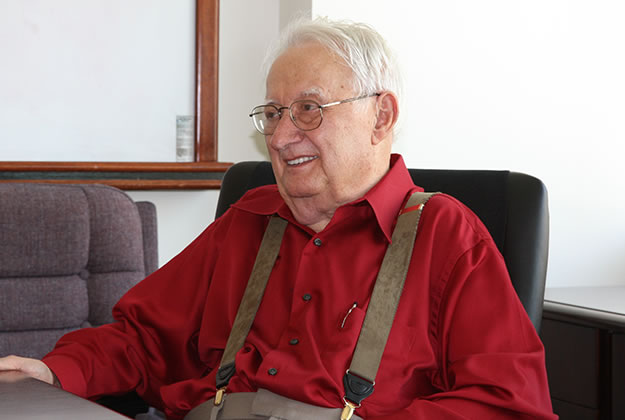 Dr. Istvan Ozsváth, a professor emeritus in the Department of Mathematical Sciences and one of the founding faculty members of The University of Texas at Dallas, passed away Nov. 27 from complications of cancer. He was 85.

Ozsváth came to the University’s precursor, the Graduate Research Center of the Southwest, in 1963 as an associate professor in the Earth and Planetary Sciences Laboratory. A gifted mathematician, he was one of the original members of the relativity research group in the center’s Department of Mathematics and Mathematical Physics, along with founding department head Ivor Robinson and associate professor Dr. Wolfgang Rindler.

Robinson is now a UT Dallas professor emeritus of mathematical sciences, and Rindler is a professor of physics.

“Pista Ozsváth was a brilliant intellect, dedicated to his scholarly quests and to his exceptional family,” said Dr. Hobson Wildenthal, executive vice president and provost. “He was modest in demeanor, secure in himself, and transmitted to all around him a warm aura of confidence and equanimity. The UT Dallas family has lost one of our founding members.”

Ozsváth, known to his friends as Pista, retired in 2012 after a distinguished research career focused on relativistic cosmology, solutions to Albert Einstein’s field equations and differential geometry, areas that relate to the structure and dynamics of the universe.

“He was a highly sophisticated relativist with tremendous insight. Reading Ozsvath’s papers is as illuminating as it is humbling,” said Dr. Mohammad Akbar, an assistant professor of mathematical sciences whose research area is also mathematical relativity. “He was always so very kind and encouraging. I believe no one saw him without his bright welcoming smile. He had so much love for everyone.”

Dr. Frederick Turner, Founders Professor in the School of Arts and Humanities at UT Dallas, is a longtime friend of Dr. Istvan Ozsváth. At Ozsváth's memorial service, Turner read the following poem he composed in honor of Ozsváth's contributions to the field of theoretical mathematics, their friendship and their shared love of poetry.

In Memory of Pista Ozsváth

How to define him, if not by negations?
–One who was never less than kind and merry,
Who had no vanity, no affectations,
Neither old-fashioned, nor contemporary;

Who could say nothing that was not the truth,
Who never took you but for what you are,
Who lacked the pomp of age, the swank of youth,
Who knew the nothingness that shapes a star.

For this man did not fear to venture in
To the unseen unknowns of time and space,
And saw the void, though empty, as the skin
Of all that has dimension, and the face
Of that which shapes the being of when and where–
That is not to be feared, since he is there.

In addition to his professional accomplishments, Ozsváth was an excellent baker who often shared his culinary creations with colleagues and coworkers.

“When you were invited to the Ozsváths’ house, one of the things you really looked forward to was the hot, fresh bread that Pista had baked. He was a masterful bread maker, which everyone knew,” Rindler said.

Ozsváth was born in 1928 to a farming family in a small village in Hungary. With an insatiable passion for learning, Ozsváth was the first in his family to leave the village to attend high school. At school, he mastered several languages, including German and French, and developed a love of poetry. Mathematics, however, was always at the forefront of his intellectual pursuits, Rindler said.

Ozsváth was one of 15 Hungarian students to be admitted annually to the prestigious Eotvos Lorand Collegium in Budapest, where he studied mathematics. After college, he pursued graduate studies in astronomy, earning his PhD from the University of Hamburg in 1960.

While in Hamburg, Ozsváth met Dr. Engelbert Schucking, a relativity expert. In 1962, Schucking took a faculty position in physics at the University of Texas at Austin, and Ozsváth joined him there as a visiting lecturer. Their 50-year collaboration ended with a paper published in 2012 dealing with Einstein’s equations.

In 1950, Ozsváth married an aspiring pianist. His wife, Dr. Zsuzsanna Ozsváth, is the Leah and Paul Lewis Chair of Holocaust Studies, professor of literature and the history of ideas in the School of Arts and Humanities, and director of the Holocaust Studies program at UT Dallas.

Ozsváth also is survived by his son, Dr. Peter Ozsváth, a professor of mathematics at Princeton University; his daughter, Dr. Kathleen Ozsváth, a graduate of UT Southwestern Medical Center and a vascular surgeon in New York; and five grandchildren.

“He was one of the kindest people I’ve ever known, and a wonderful father,” Rindler said. “He made every effort to be very nurturing and very interested in his children. He would say that his greatest contribution to mathematics was his son.