Assembly lines of volunteers wearing blue hairnets scooped and measured rice and lentils into plastic bags while upbeat music blared from speakers in the Galaxy Rooms in the Student Union.

By the end of the two-hour project, 170 students and other volunteers had packaged 20,000 bags of ready-to-cook jambalaya meals as part of a University of Texas at Dallas service project to honor Dr. Martin Luther King Jr.

The nonprofit organization Feeding Children Everywhere, which provided the supplies, will distribute the meals through the North Texas Food Bank.

“The MLK Day of Service on campus is an opportunity to remember Dr. King’s legacy and recommit ourselves by volunteering in service to one another,” August said. “Five decades later, we still have work to do to realize Dr. King’s dream.”

“The MLK Day of Service on campus is an opportunity to remember Dr. King’s legacy and recommit ourselves by volunteering in service to one another. Five decades later, we still have work to do to realize Dr. King’s dream.”

Bruce August Jr., assistant director for programs and marketing for the Multicultural Center

The University’s week of activities to honor King, called Dream Week, also included Diversity Dialogues, a facilitated cultural discussion, and the annual MLK Jr. Celebration Breakfast at the Davidson-Gundy Alumni Center, which also was presented by the Student Union & Activities Advisory Board.

The breakfast featured a performance of “Amazing Grace” by the a cappella student organization Novis. Guests also were invited to add their thumbprints to a painting of King that accounting junior Tina Yari created for the event. The painting was displayed at the event as part of the student group the LOTUS Project, which works to expose more students to arts by displaying student artwork on campus.

“What we need are people who understand the combination of power and love who are allocators,” Butler said. “We need people who have resources that can be allocated in a positive and transformational way.”

As Dream Week wrapped up with the meal-packing Day of Service project, Feeding Children Everywhere representatives thanked students for their help.

“I just wanted to help out and volunteer for something that might seem little but could make a big difference,” said Caleb Kasner, a neuroscience senior who participated with a group through the AES Cultural Scholars program. 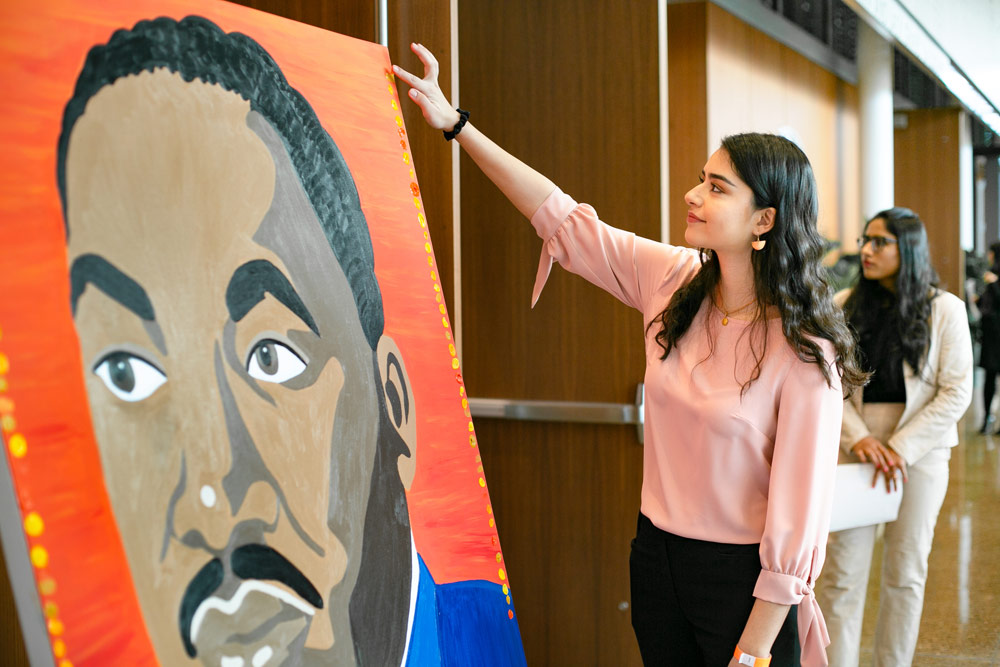 Tina Yari, accounting junior, painted a portrait of Dr. Martin Luther King Jr. for UT Dallas’ breakfast celebration. Guests were invited to place their paint-dipped thumbprints along the border of the canvas as a symbol of building on King’s dream. Yari said she takes art classes at UT Dallas as electives and participates in the student group the LOTUS Project, which works to expose students to the arts and displays student artwork on campus.