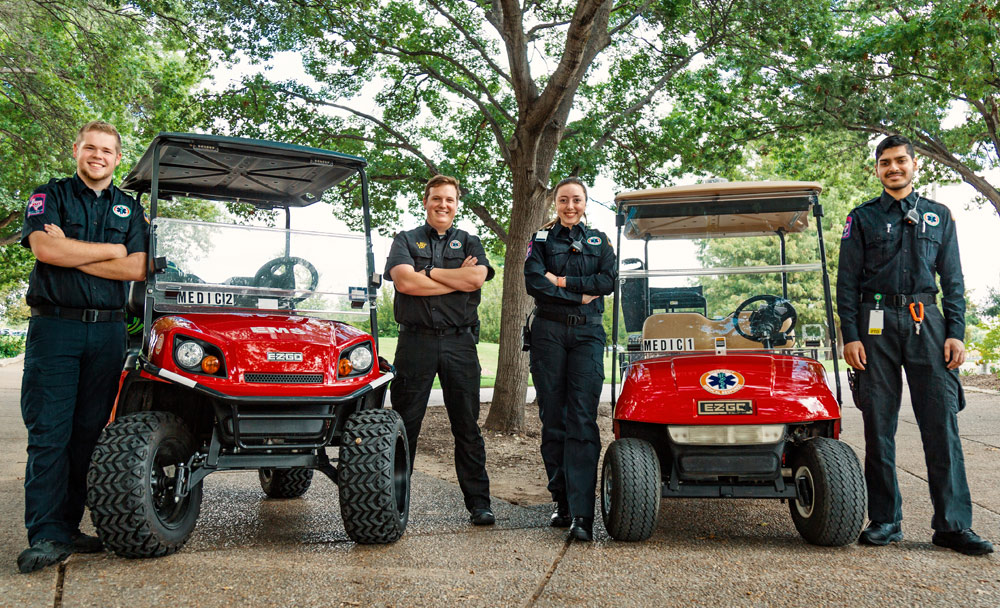 For any on-campus medical emergency, call UT Dallas Police at 972-883-2222. UEMR will respond first, and the city of Richardson’s 911 service will be called if needed.

Join the team: For more information about the UEMR team or to apply as a volunteer, email [email protected] or call 972-883-4358.

The team responds to an average of two calls a day, said Scott Bell, chief of the UEMR team.

“It’s been ever-increasing this semester,” said Bell, who is a neuroscience junior in the School of Behavioral and Brain Sciences. “We found that people were not getting care for minor injuries, such as cuts or scrapes from a skateboard fall. Now we’re handling those, and we’re also answering life-threatening calls: seizures, breathing emergencies, chest pains, stroke, psychiatric problems and trauma.”

UEMR volunteers, who are mostly pre-med students, use golf carts to arrive within two to four minutes at any location on campus. A second golf cart was added this year to accommodate calls. Housed in Cecil H. Green Hall, two rotating team members are on-call each night, with others filling daytime shifts.

The team operates within the BLS scope of practice, which includes CPR, respiratory assistance, basic medication assistance and other noninvasive, life-support measures. This semester the team received approval to administer lifesaving drugs such as epinephrine and naloxone, as well as completing blood glucose assessments.

The service especially benefits students who don’t have a vehicle on campus to get to emergency care facilities and those who need emergency care after 5 p.m. when the Student Health Center is closed.

The UEMR team works closely with UT Southwestern Medical Center through the BioTel system to develop its protocols and partners with the city of Richardson Fire Department and the UT Dallas Police Department.

The UEMR team is notified whenever someone on campus with a medical emergency calls the UT Dallas Police or the city of Richardson’s 911 system. Being on campus helps the team shorten the response time and improve the accessibility of care for members of the UT Dallas community.

“The UEMR team has repeatedly demonstrated its value to the University community. We now know they can cut around five minutes off of medical response time, which can be life-critical.”

If someone calls 911, the team responds quickly, while volunteers stay in touch with the city’s emergency dispatchers who continue to monitor the situation. Bell said the idea is for those on campus who need UEMR services to call UT Dallas Police first, which will reduce the response stress on the city of Richardson and avoid having an ambulance or firefighters unnecessarily called out.

“The UEMR team has repeatedly demonstrated its value to the University community,” UT Dallas Police Chief Larry Zacharias said. “We now know they can cut around five minutes off of medical response time, which can be life-critical. It is outstanding that University Housing and University Recreation are able to call on them regularly for patient care.”

While the team consists mostly of students who have EMT or paramedic experience, faculty and staff with EMT training also can volunteer.

A new partnership with El Centro College provides an EMT class on the UT Dallas campus so that students who lack an EMT certificate can receive the necessary training to be part of the team. This fall 17 UT Dallas students enrolled in the class, and Bell expects the majority will join the team next spring.

Bell, who hopes to eventually become a physician and work in emergency medicine, said being part of the team is “an adrenaline rush.”

“I love going in and not knowing what you’ll find,” Bell said. “Getting hands-on experience is never an easy thing to do. You’re responsible for someone’s life. But positively affecting patient outcomes is a real confidence builder for the providers, and the service is a great benefit to the campus community as well.”