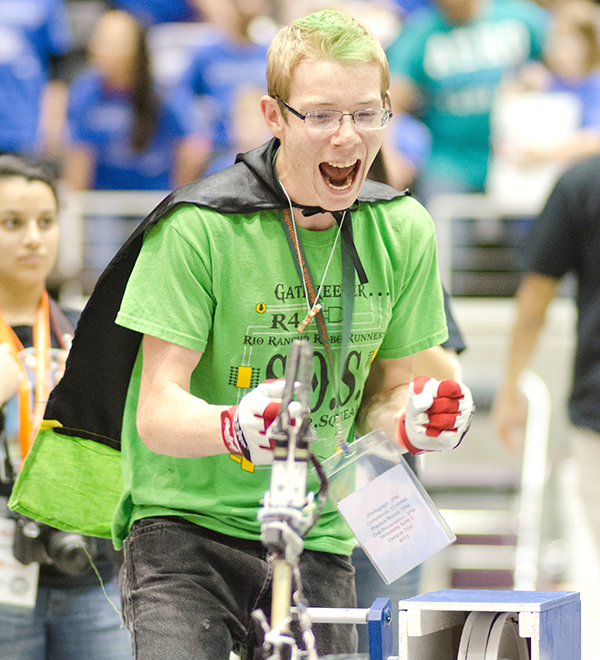 The event, held in Garland, was sponsored by The University of Texas at Dallas and by BEST, which stands for Boosting Engineering, Science and Technology. Each year, BEST presents students with a new robot challenge, and students are given six weeks to design, build and develop a marketing plan for a fully functioning robot. The Texas event is the largest of four regional championships.

Including the competitors, more than 3,000 people turned out to watch the event, with more than 1,000 tuning in to watch a live Internet stream.

“The UT Dallas Texas BEST Regional Robotics Championship brings the brightest and most innovative students together from all over Texas and New Mexico,” said Dr. Kenneth Berry, assistant director of the Science and Engineering Education Center (SEEC) at UT Dallas, which hosts the competition, along with the Erik Jonsson School of Engineering and Computer Science.

“Texas BEST is like a sports event for the mind. It has all the drama, the triumph and tragedy of a major sporting event,” Berry said. “The only difference is, BEST is a workout for the mind rather than the body.”

The challenge this year was to build a robot to "fabricate" a new central processing unit (CPU) for a vintage robot. During competition, two team members affix their robot to a trolley that moves the robot along a track. One team member remote-pilots the robot along the track while another team member manipulates the robot’s remote-controlled arm, which has grippers attached at one end. That telescoping arm is used to grab and arrange items like clothes hangers, wooden dowels and different-shaped blocks that represent various electronic pieces.

Teams earn points by building an inventory of electronic components and demonstrating that their robot can successfully assemble them into a central processing unit. 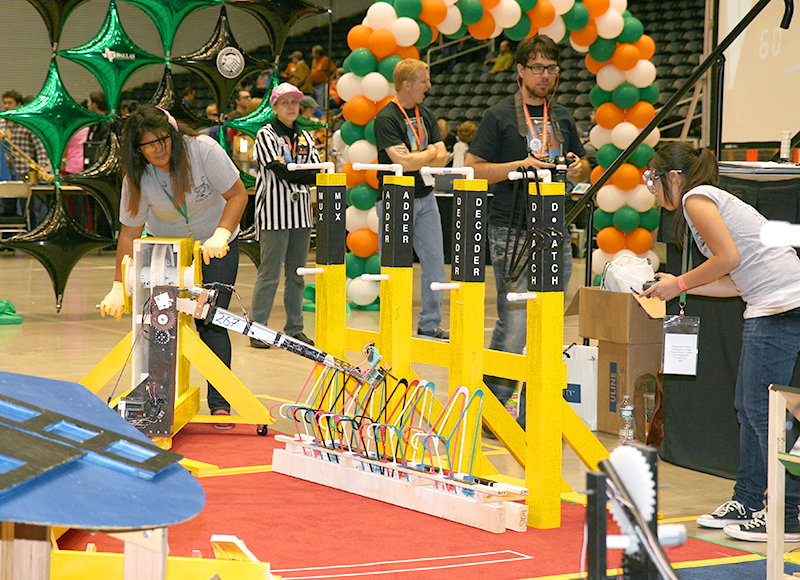 The contest required one team member (left) to use a crank to move the robot along a track while a second team member (right) used a remote control to manipulate the robot’s telescoping arm.

Among the nearly 60 teams competing, the highest achievement of the tournament, the BEST Award, went to the United Engineering and Technology Magnet High School in Laredo. Their design gave them an edge, said team member Mario Soliz. It incorporated two grippers on the robot arm, allowing them to move two objects at a time.

“We had only one gripper in the qualifying contest, but we thought we could do better,” Soliz said. “We had spare grippers, so we took one and flipped it over, making a mirror. It works exactly the same as the other one, and it’s extremely efficient.”

Caleb Holets was on the Rio Rancho Robo Runners (R4), a home-school robotics team from New Mexico that placed third for the BEST Award. Teammates showed their spirit by donning capes, spraying their hair green and decorating their shoes.

Holets said the most difficult aspects of the competition are working as a team and communicating effectively.

“Driving and spotting is hard,” Holets said. “You have to basically move as one person, because you’re both moving the same robot, one person on the trolley and one on the arm. We’ve practiced so much, we don’t even think about it. We’ve also learned how to deal with difficult situations, and practiced where we don’t speak to each other and only use hand signals.

“When we all work together, it goes really well. It is so much fun.”

Teams received awards in several categories, including the most points scored in the game, creative robot design, project engineering notebook, team spirit and sportsmanship, marketing presentations, and team T-shirt designs, as well as kudos for the most elegant, the most robust and the most photogenic robots.

In addition to SEEC and the Jonsson School, sponsors of the event were Texas Instruments, Lockheed Martin, Raytheon and Rockwell Collins. The national corporate sponsor was MathWorks.

Dr. Kenneth Berry, assistant director of the Science and Engineering Education Center at UT Dallas, says early exposure to robotics, such as the Texas BEST Regional Robotics Championship, gives students a leg up in their pursuit of future high-tech careers.

“What the kids are learning about science, technology, engineering and math through this robotics competition, they will be able to apply throughout their lives,” Berry said.

Graves is a freshman at Texas A&M University, where he’s studying computer science and robotics engineering and is on a robotics team. He was captain of the Denison High School robotics team at the 2012 Texas BEST Robotics Championship. To attend the 2013 BEST event and cheer on his former team, he filled out 45 pages of paperwork to obtain leave from the corps for the weekend.

“I’m interested in military and civilian applications of robotics, such as using quadrotors [unmanned aerial vehicles] in search and rescue operations,” Graves said.

Jodi Wooten was a BEST robotics participant as a high school student in Sherman. She continued as a volunteer at BEST events while studying engineering technology in college, and after graduation worked for Texas Instruments and Nortel Networks. She came back to the 2013 event as a volunteer.

“The BEST competition gave me insight into the engineering/technology career path and solidified my decision to pursue my engineering degree,” said Wooten, whose husband is a UT Dallas engineering alum. “It taught me how to work with a team, combining many strengths and skill sets to accomplish one common goal. I have used these same skills in my career for the past 15 years.”