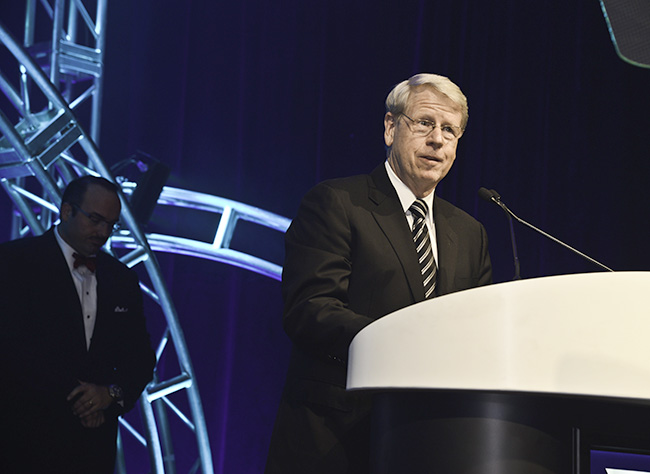 President David E. Daniel was honored for his advocacy of technology in North Texas, and specifically for his push to develop more national research universities in Texas.

The council, the largest technology trade association in Texas, hosts the annual Tech Titans awards to celebrate the achievements of individuals and organizations that have made significant impacts on the technology industry in North Texas.

Daniel said the University serves the technology community in part through its faculty members, who generate discoveries in basic and applied research, and by the education and graduation of work-ready students who are hired by technology companies to fuel corporate innovation.

“It’s easy to advocate for technology because there is a great community here in the Dallas-Fort Worth region,” Daniel said during his acceptance speech at the Tech Titans awards gala.

During the ceremony, Daniel was lauded for his efforts to propel the University toward status as a Tier One research institution. In 2008, Daniel wrote a white paper that outlined why Texas needed more nationally competitive research universities, and he offered a plan to move that process forward. Seven of the state’s emerging research institutions backed the strategy, and many of Daniel’s ideas are now part of Texas law.

Steve Lyle, director of Engineering Workforce Development at Texas Instruments, nominated Daniel for the award. He noted that under Daniel’s leadership, the University’s research and development expenditures have more than doubled, from $42 million to nearly $91 million in 2012. In addition, since 2008 the University has disclosed more than 200 new inventions and formed 11 spin-off companies.

“Through his leadership, Dr. Daniel is rapidly developing an economic engine, making UT Dallas a critical part of the innovation ecosystem of area companies and a top producer of top technical talent,” Lyle said. “There is no doubt in my mind that our TI founders, who were also the founders of UT Dallas, would be very proud of him.”