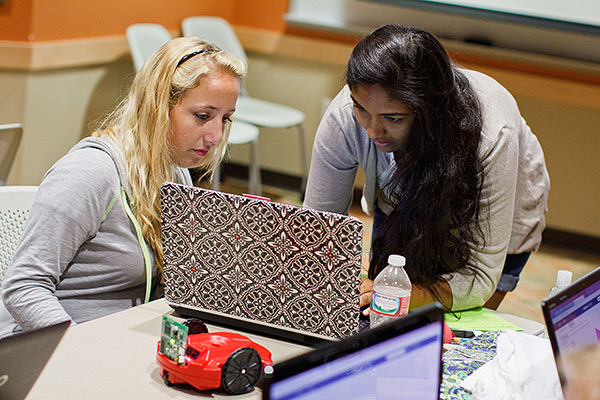 Seventeen-year-old Caroline Ware had a choice to make: band camp or computer programming camp. The high school drum major chose to travel more than 750 miles from Georgia to attend the Geeky Girls Camp held earlier this month at UT Dallas.

“There are not a lot of programming camps for girls at colleges,” said the aspiring engineer. “Everyone needs it under their belt for an engineering major, because everything is run by computer.”

Band was not far from Caroline’s heart, though. She programmed a robot to play and dance to “Any Way You Want It” by Journey and “Some Night” by Fun – songs she and her band will be performing this upcoming school year.

Caroline and 17 other high school girls spent three days and two nights on campus immersed in computer programming and information technology.  Students left with experience in the programming languages Alice, JavaScript and Python, and new friends with whom they shared s’mores, learned salsa dance moves, and celebrated a camper’s birthday. Women from businesses such as IBM, Microsoft, Raytheon and Texas Instruments shared their stories and experience with the campers. 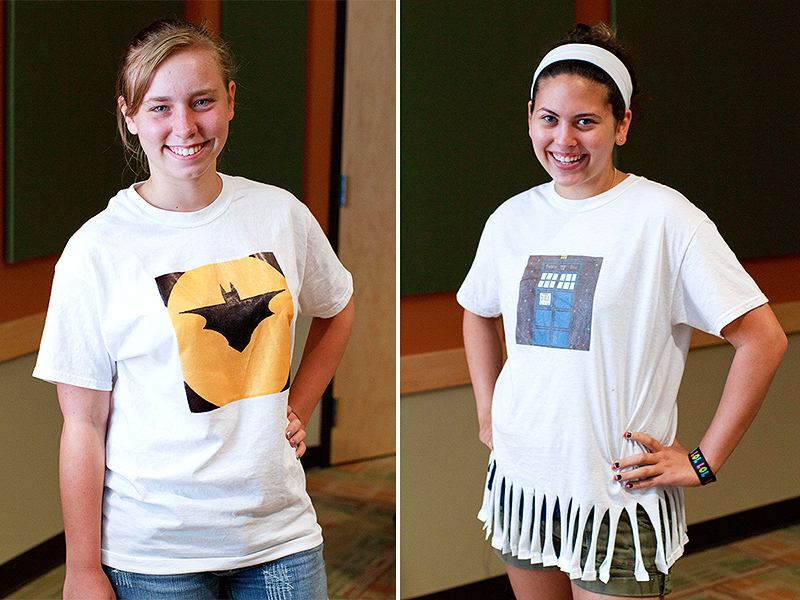 Tara Bridgeman (left) and Gabby Lecca show off T-shirts they designed with the Javascript programming language.

Dr. Janell Straach, who spent 14 years at IBM and is now a senior lecturer in the Erik Jonsson School of Computer Science, facilitated the camp.

“The numbers of women in the computer science field are declining,” she said. “This was one thing we can do to change that.”

Straach said she hopes the camp will challenge many of the stereotypes that may keep women from the field. For example, many programming camps end with building a robot that can be used for violent purposes. She encouraged students to make their robots dance together.

“You do not want to fall into the trap that robots can only be destructive or fighters,” she said.

“We know that women will stay in a field if they are involved in giving back,” she said.

Reva Pabba, a sophomore computer science student at UT Dallas, thought when she volunteered she would be handing out papers or doing other support roles, not teaching. 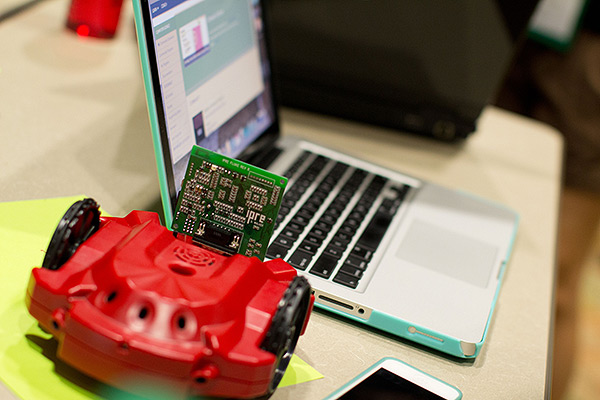 Pabba said she is impressed by what the girls, most of whom had no programming experience, had learned by the end of class. For example, the students were able to make images for T-shirts using Javascript, something that is often not taught in traditional programming classes.

“I wish I had had this opportunity,” she said about earlier exposure to programming with other females. “I want to be part of someone else’s experience of knowing that many people are there to support me.”

Rachel Williams, who in May graduated with a minor in software engineering at UT Dallas and is now a master’s student, was another volunteer. She remembers sometimes being singled out as one of the few women in programming, and feeling intimidated in one of her early programming classes.

“I was surrounded by guys who had already dabbled in it,” she said. “It’s empowering to be with other women.”

The Geeky Girls Camp ran July 30 – Aug. 1 and was sponsored in part by the National Center for Women and Information Technology (NCWIT).

The camp was one of nearly a dozen held this summer by the Computer Science Department of the Jonsson School.