Retired Admiral to Discuss Bridging the Employment Gap for Veterans 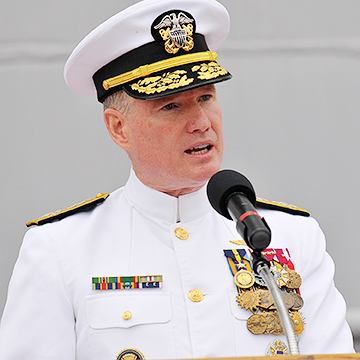 There are 1.6 million veterans in Texas, making it one of only three states with veteran populations greater than 1 million. The Dallas area is regarded as one of the nation’s top places for veterans to live, but their prospects elsewhere are not always so promising. Nearly 30 percent of the nation's veterans between the ages of 18 and 24 were unemployed in September.

What can be done to bridge the gap from deployment to employment?

On Tuesday, retired Adm. Patrick Walsh of Dallas, former commander of the U.S. Pacific Fleet and a former Blue Angels pilot, will address the barriers and bridges that servicemen and women face in re-entering civilian life as part of a public lecture presented by the new Brain Performance Institute at the Center for BrainHealth. Walsh will share how veterans can help businesses and corporations flourish.

Buy Tickets for
'Barriers and Bridges'

The lecture is sponsored by Dennis Berman, Jana and Bob Dransfield, Linda and Joel Robuck, Nancy and Bob Wilber, and the Texas Irish Foundation.

“One of the most pressing needs of military veterans is gainful, steady employment,” said Eric Bennett, executive director of the Brain Performance Institute. “How we treat and reintegrate our nation’s greatest national assets both in and out of uniform will directly affect the success of companies and communities across the nation. By capitalizing on the valuable leadership, decision-making, strategic thinking and problem-solving skills learned in the military, the Brain Performance Institute is dedicated to raising awareness of the challenges warriors face and helping them reach their brain potential and civilian life success.”

In advance of the lecture, Walsh answered a few questions about transitioning from military to civilian life.

Why is this topic of such importance to you?

“It is our social and moral imperative to ease the transition of our all-volunteer force back to the civilian world. These men and women are the 1 percent of the population who have raised their hands to defend the Constitution and our country no matter the sacrifice. It is our responsibility to make sure these soldiers, sailors, airmen and Marines are given every opportunity to achieve successful, enriching and fulfilling lives in the civilian work force.”

What qualities do our veterans encompass that make them an asset to the business world?

“I would be first in line to hire a veteran. They are dedicated leaders. Veterans are self-disciplined, resilient and willing to work toward the greater good. The stamina veterans must maintain to be successful in a military environment is an asset in the civilian world. They are accustomed to maintaining and sustaining high-level performance in no-fail environments, which translates to an ability to learn, adapt and thrive in the most difficult circumstances.”

What would you tell a potential employer about how to leverage veteran capabilities for success in the private sector?

“You don’t want to compete against a veteran; you want them on your team. They are proven professionals who understand how to operate and execute a mission; they subscribe to a set of ethics and fully understand principal decision-making. While their resumes may not be traditional by business-world standards, their qualifications make hiring a veteran a worthwhile investment for any company.”

What do you see as the biggest barrier to a veteran's transition from military to civilian life?

“In previous generations, there were leaders of companies who could look at veteran applicants and direct where those people would best fit within the corporation. Today, because there are so few employers who have hands-on experience in the military world, the operating principle is that the service members themselves must find a way to translate their experience and fit within the corporate culture. This mode of operation is a detriment to not only the company but to the veterans themselves.”

What is your message to veterans who are in the transition right now?

“Come to Texas. Don’t hesitate. Don’t think twice. We need you here and will put you to work."