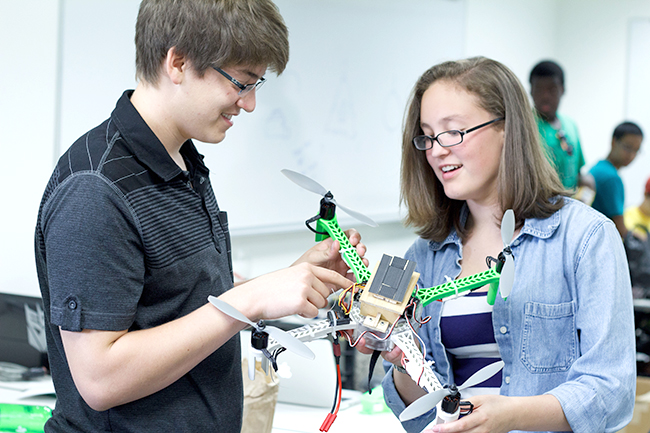 Matthew Whitby and Chandler Neames discuss how their team’s quad copter, a small unmanned aerial vehicle, might be used to assist police and first responders.

More than two dozen high school students learned how to fly right as technology entrepreneurs during a four-week summer camp at The University of Texas at Dallas.

Students from the Dallas area and beyond spent a month assembling and learning to operate small, unmanned aerial vehicles called quad copters, which are remote-controlled flying robots.

“The campers not only built the vehicles from a kit and learned how to fly them, they also had to come up with a business plan for their use,” said Dr. Kenneth Berry, assistant director of the Science and Engineering Education Center (SEEC) at UT Dallas and director of the University’s first Quad Copter Camp.

The high school students were divided into five teams. With guidance from UT Dallas faculty and students in the Naveen Jindal School of Management and the Erik Jonsson School of Engineering and Computer Science, each team came up with a company name and determined a problem that its robot would address. They then conducted market and feasibility analyses and developed a business plan. 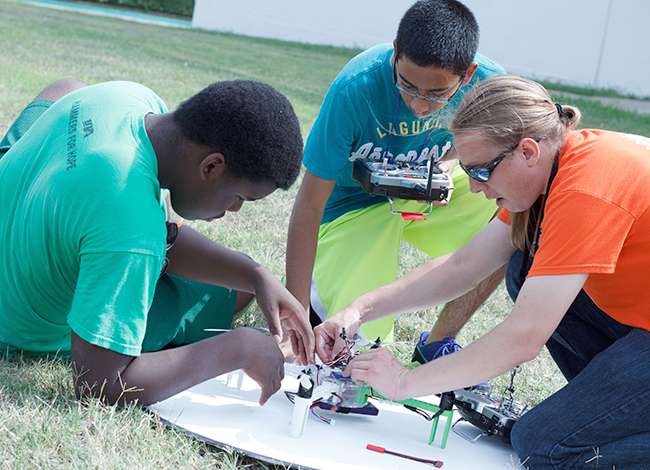 Quad copters can vary in size, but all are lifted and propelled by four symmetrically placed rotors, which are similar to helicopter blades.

“There are so many ideas for using this type of small aerial vehicle,” Berry said. “For example, they might be used to deliver emergency pharmaceuticals to people in a disaster area, to count cows on a large ranch, or assist in search and rescue operations. This is a new industry that is really poised to take off.”

From their analyses, teams developed robot designs, including attaching sensors, cameras and infrared cameras to their vehicles. Campers also programmed the robots, and designed and manufactured custom parts using computer-aided design software and a 3D printer.

Teams flew their vehicles through a series of challenges, such as following a ball on a soccer field, maneuvering the copter close to a (mock) hazardous-waste container, and searching for a hidden person using an infrared camera on the vehicle.

Enrique Vargas, a student at Plano West High School, said the program was more than “just a summer camp.” 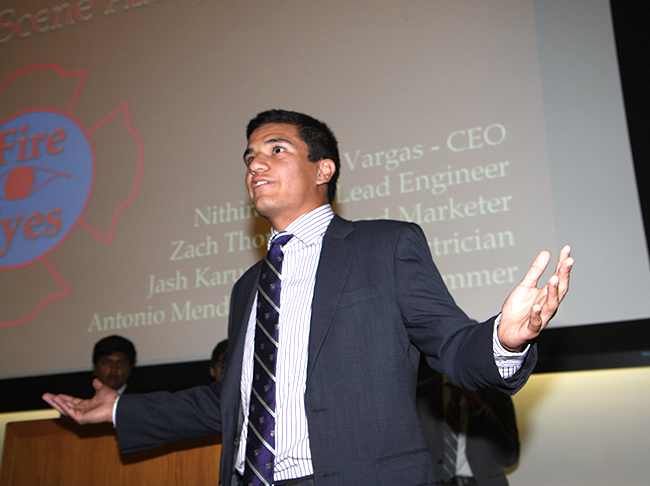 Enrique Vargas, a student at Plano West Senior High School, was CEO of the Fire Eyes team. He led a presentation of his team’s business plan before an audience of parents, peers and a panel of judges.

“We learned so much,” Vargas said. His group’s proposed product was designed to aid firefighters by flying over and scanning burning buildings, providing information about dangerous spots and wind conditions.

“I came here because I wanted to fly quad copters, and ended up starting a business,” Vargas said. “It’s really amazing and something that I can take with me. It opened my eyes to a whole new world of ideas.”

UT Dallas alumnus Rebecca Poynter, BGS ’86, is an OnPoynt co-owner and education specialist. She said the skills offered by the Quad Copter Camp are in tune with those important to her company’s business, which sells and provides training in small unmanned aerial systems.

“This camp is a very significant program in aerial robotics,” she said. “The kids are great. They’re using 3D printing, which is very cool, and they’re learning the importance of teamwork.”

On the last day of the camp, students dressed in business attire and, in front of an audience of peers and parents, pitched their ideas via multimedia presentations to a panel of “venture capitalist” judges, who chose to “invest” in the winning company. Faculty from the business school assisted throughout the camp to coach the teams on how to make an effective pitch to potential investors. 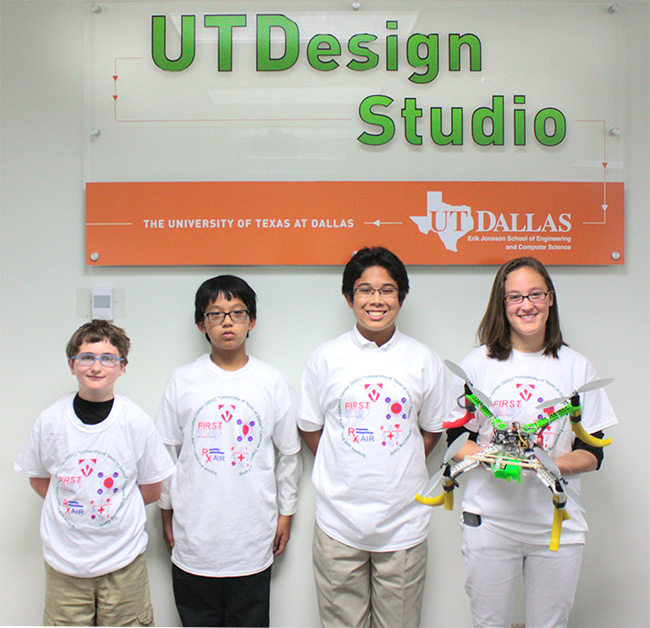 Neames currently lives in Washington state and attends Aviation High School in Des Moines, Wash., where she will be a senior this fall. She said she came to the camp in part because it was a good fit for her interests – in college she plans to study engineering, along with business.

Her other objective was to check out UT Dallas. After visiting campus, she said the University is among her top college choices.

“UT Dallas has a strong engineering program and a really good business school, and I think it’s good to have that business background with the engineering. I’m really excited to come here,” Neames said.

Picken said the students got their arms around the business aspects of the projects and demonstrated some creative ideas and business solutions.

“I think they all did a great job, and I hope they all gained a greater appreciation for the difficulties and the challenges of taking an idea and bringing it to market,” said Picken, who also is academic director of UT Dallas’ Institute for Innovation and Entrepreneurship.