When you’re building a $1.2 billion hospital the size of the Dallas Cowboys' stadium, skilled project management is critical to keeping construction on time and within budget, project officials said recently during an event at UT Dallas. 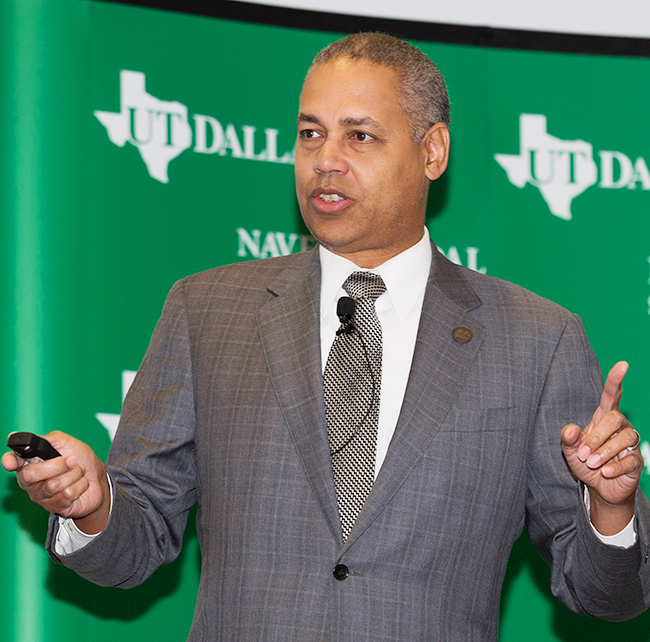 Walter Jones, an executive at Parkland Health and Hospital Systems, likened the building of the new hospital to the construction of the Dallas Cowboys' stadium.

Walter Jones, an executive at Parkland Health and Hospital System, and Mike Candler, a project manager of the $1.2 billion Parkland hospital construction project, were two of the keynote speakers during the 7th Annual UT Dallas Project Management Symposium held at the Naveen Jindal School of Management.

The two-day conference featured more than 60 speakers who addressed about 400 project managers, who oversee projects in fields ranging from engineering construction, to health care to transportation.

The symposium, titled “Project Management: Optimizing Value to Stakeholders,” was among the largest of its kind in North Texas. The event was sponsored by the Executive Education Project Management Program at UT Dallas, in cooperation with PMI Dallas Chapter and PM World Journal.

The scope of the massive Parkland project required a wide range of expertise.

Parkland, a fixture in Dallas since 1954, will be replaced with a 2.7 million-square-foot facility built on 64 acres, making it among the largest hospital construction projects in the United States. The project required assembling and coordinating the work of numerous designers, architects, engineers and others, said Jones, Parkland’s senior vice president for facilities.

Mike Candler, of TEECOM, described his role in overseeing the information technology plans for the new hospital.

When it opens to patients in 2015, the facility will represent the latest and most advanced thinking in health care facilities planning, while leaving room for future advances in medical technology and equipment, Jones said.

One of the biggest challenges for hospital projects is trying to anticipate future technological needs of the facilities, said Candler, senior design engineer for TEECOM, who manages the hospital’s information technology plans.

“Mobile technology is changing every 18 months. So by the time we open the new Parkland hospital, we will have gone through many different generations of mobile phones, tablets, all kinds of technology – and people are going to be wanting to use those. But we weren’t even aware of them when we started designing,” Candler said.

The hospital’s size and scale, Jones said, is on par with the “other Jones’” project – AT&T Stadium in Arlington, where the Dallas Cowboys play.