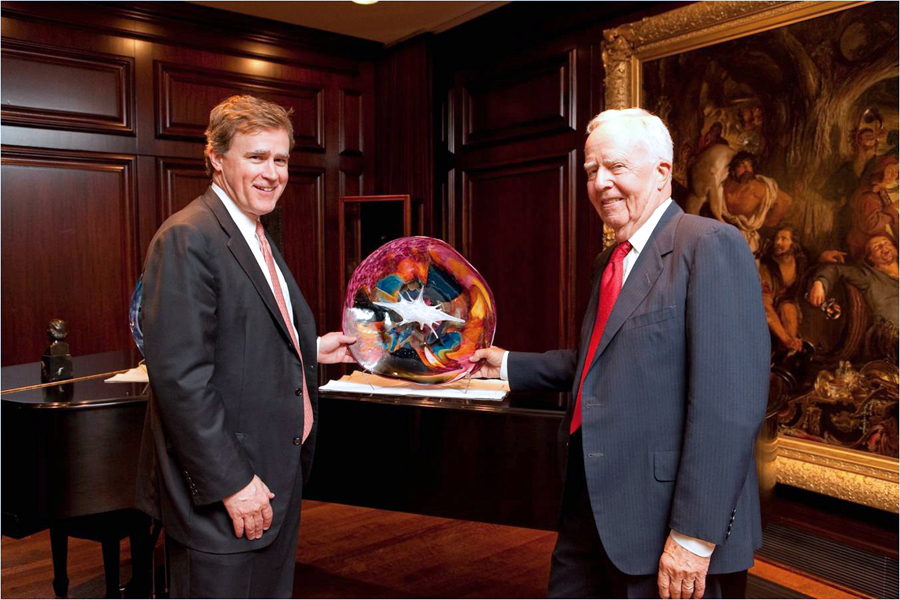 Dr. Charles Branch Sr. (right) and his son, Texas Rep. Dan Branch, are pictured with the glass sculpture that is given to recipients of UT Dallas' Charles Branch BrainHealth Award.

The Center for BrainHealth and The University of Texas at Dallas are mourning the loss of Dr. Charles Branch Sr., who passed away Friday.

Branch was a leading research scholar, neurosurgeon and humanitarian, and his pioneering and groundbreaking work aided in creating a definitive approach to mapping brain function. He was “a true visionary and a friend of both the Center and the University,” said UT Dallas President David Daniel.

“Dr. Branch’s scientific study and medical practice have significantly impacted our knowledge of the human brain,” said Dr. John Hart Jr., medical science director of the Center for BrainHealth. “His innovative work laid the foundation for many future discoveries and alleviated the burden of epilepsy for countless individuals over the years. Branch’s keen intellect, generosity and leadership are unparalleled and will be greatly missed.”

Branch grew up in West Tennessee and graduated from Vanderbilt University Medical School in 1953. After a rotating internship at the University of Chicago, he completed his neurosurgical residency at the Montreal Neurological Institute under the guidance of legendary neurosurgeons Drs. Wilder Penfield and Theodore Rassmussen. In 1968, he moved to San Antonio to join the faculty of UT Health Science Center at San Antonio and entered private practice. After retiring in 1994, Branch dedicated much of his time, energy, and support to medical missions in Haiti, Guyana, and Nigeria.

“Dr. Branch’s legacy will live on, not only through his scientific breakthroughs, but also through the individuals whose lives he touched,” said Dr. Sandra Bond Chapman, founder and chief director of the Center for Brainhealth. “He often selflessly donated his time and medical expertise to those in need. He will forever be remembered.”

The symposium, held alternately at the Center and the Helen Wills Neuroscience Institute at the University of California, Berkeley, convenes distinguished neuroscientists to discuss the latest advances in brain research and attracts an international audience of cognitive scientists, physicians, psychologists, researchers and other professionals in the field. The 2014 award will be presented on April 10 at the Center for BrainHealth to Dr. Floyd Bloom, professor emeritus at The Scripps Research Institute.

In April of 2010, Branch donated a collection of memorabilia and scholarly material that recounts his study with Penfield and Rassmussen to the Center for BrainHealth. Several medical devices from the late 20th century are on permanent display in the BrainHealth lobby and an online archive is currently in development.

Branch is survived by his wife, Sylvia Boswell Branch, his wife of over 60 years, their five children, numerous grandchildren, and a great-grandson.