New Master Plan Pictures Possibilities for Future of the University 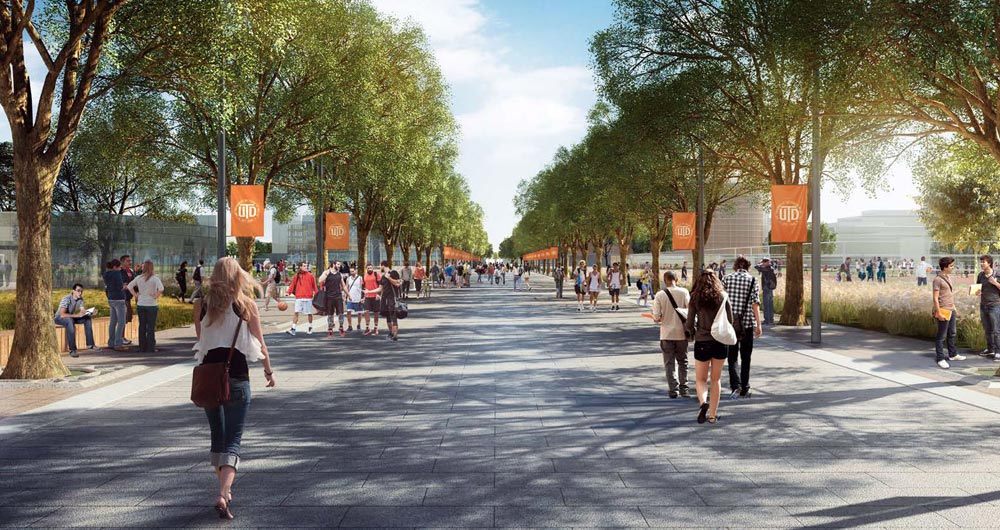 The Campus Master Plan includes an athletics district that features a pedestrian thoroughfare and sports venues on the south side of campus.

The newly updated Campus Master Plan for The University of Texas at Dallas provides a vision for how to maximize campus space as the University continues to experience unprecedented growth in the years ahead.

It’s a high-level overview that will help guide decisions for the campus infrastructure, roads and landscaping but still leaves flexibility for details, said Rick Dempsey, former associate vice president for facilities management who retired in February after heading up the project.

“It’s not meant to be directive. It’s not saying, ‘This new building will go right here.’ It informs where we will go from here and establishes the criteria to help those decisions go forward,” Dempsey said.

The master plan is based on the University’s strategic plan goals and will help direct decisions as the campus population grows to a future student enrollment of 35,000. Approved by The University of Texas System Board of Regents in fall 2018, the master plan includes a more urbanized and concentrated academic core, enhanced open spaces, and greater pedestrian and vehicle mobility.

“We’re not going to be building any single-story buildings on campus. Three to four stories will be the minimum. We’ve kind of run out of infield.”

Dempsey began the process of shaping the new plan a year ago by first collecting input from numerous stakeholders and interest groups. This input was then vetted with a cross section of faculty and staff, who served on committees to obtain and share information from the campus and surrounding communities and then determined the content to be included in the draft of the updated plan.

“It takes a large upfront effort to reach out and energize the community, get their thoughts and collate those thoughts. Then you have to engage people who are experts in higher education planning,” Dempsey said.

Page, a national architectural and engineering firm, provided a team of planners and architects to help create the updated plan.

The plan was publicized last fall through multiple channels, including presentations to the campus community via town hall meetings, an open-access website and distribution of a formal written document. It was approved after UT Dallas President Richard C. Benson presented the plan to the Board of Regents in November.

A key component of the plan is to create more distinct districts on campus, with student housing on the west side, academics in the central core, research to the north, and athletics and recreation on the south side. The district plan keeps the academic core of campus constrained so students can easily navigate class changes within an allotted time. 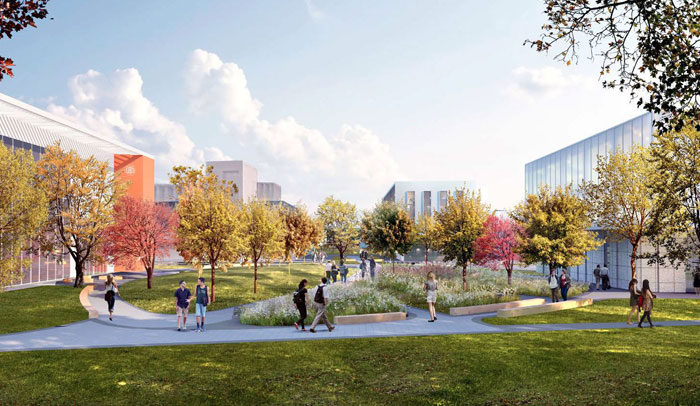 An arts village may include new buildings near the center of campus.

To accommodate greater numbers of people in the same physical space, any new buildings will need to take up vertical space instead of having a large land footprint, Dempsey said.

“We’re not going to be building any single-story buildings on campus. Three to four stories will be the minimum. We’ve kind of run out of infield,” he said.

Some existing buildings, including modular buildings that are close to their expected lifetime, will need to be replaced, Dempsey said.

“They’re not dense, and they take up a lot of critical land,” he said.

To further improve pedestrian and vehicular traffic flow, the plan recommends a pedestrian-only core as well as enhancements to Loop Road. Surface parking lots will be replaced with multilevel parking structures that accommodate the same number of vehicles but take up less room.

The plan also seeks to create and preserve green spaces to take advantage of natural elements on campus, such as the creeks, particularly on the east side where a section has been designated to accommodate major gifts of art.

Officials also hope to optimize development opportunities on the University’s 140 acres of mostly vacant property — except for already completed Northside residential and retail complexes — north of Synergy Park Boulevard. Part of that land will include a Dallas Area Rapid Transit station by 2022.

The latest major construction project on campus is the still-in-progress Science Building, a 175,000-square-foot, multistory building that will contain classrooms, labs, offices and support space for the Department of Physics and the William B. Hanson Center for Space Sciences. 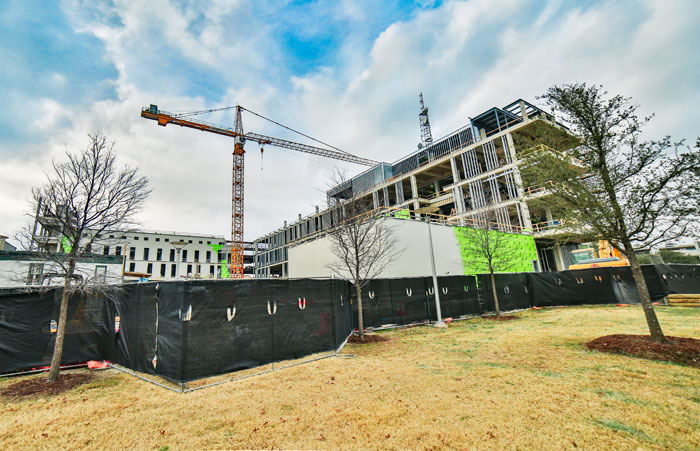 The new Science Building, just north of the Science Learning Center on Rutford Avenue, is expected to open in spring 2020.

It will provide optimal areas to carry out teaching, advising and research activities, including 150- and 300-seat lecture halls, research and teaching labs, student collaboration space and faculty offices.

The building was topped out in December, when the last beam was placed at the top of the structure, but construction work continues on roofing elements, exterior wall framing, sheathing and waterproofing. Interior work includes electrical conduits, ventilation ducting and wiring. Set to open in spring 2020, the Science Building is expected to be certified as a Leadership in Energy and Environmental Design (LEED) building.