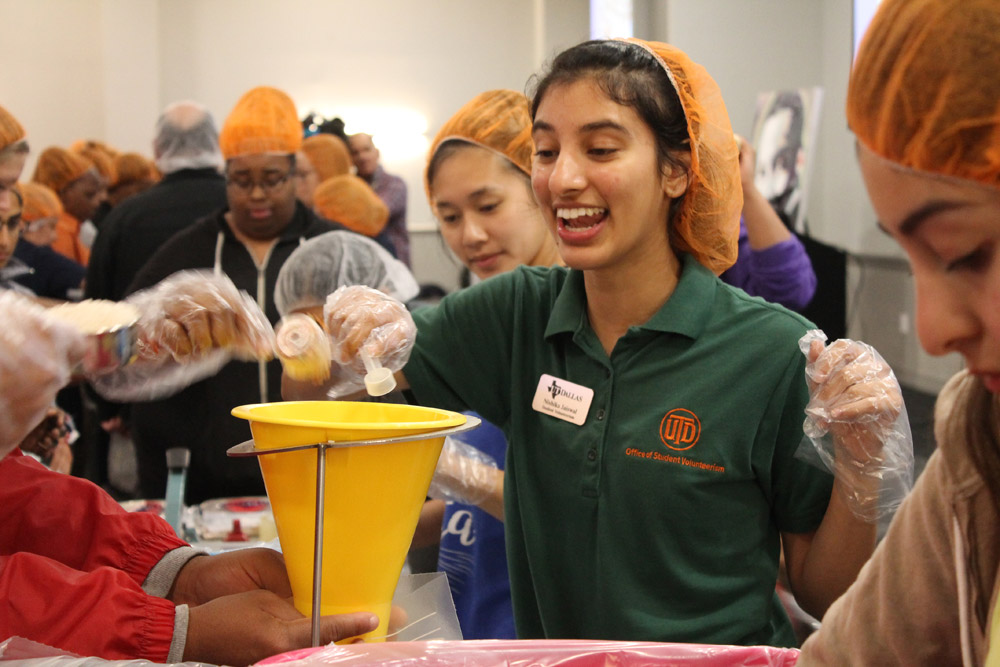 Neuroscience senior Nishika Jaiswal drops a measuring scoop of ingredients for prepackaged red lentil jambalaya meals that will be delivered to area children. The meal-packing project was the University’s service event designed to honor the legacy of Dr. Martin Luther King Jr.

About 175 UT Dallas students and other volunteers packaged 25,000 bags of red lentil jambalaya meals for area children as part of a University of Texas at Dallas service project to honor Dr. Martin Luther King Jr.

The nonprofit organization Feeding Children Everywhere, which provided the supplies, will distribute the meals through the North Texas Food Bank.

The University’s MLK Day of Service was created in 2018 by the Multicultural Center in the Office of Diversity and Community Engagement and the Office of Student Volunteerism as a way to let students follow through on King’s challenge to help their communities. It was just one of several activities to celebrate King’s life and legacy during the University’s “Dream Week,” whose theme this year was “Catalyst 4 Change.” 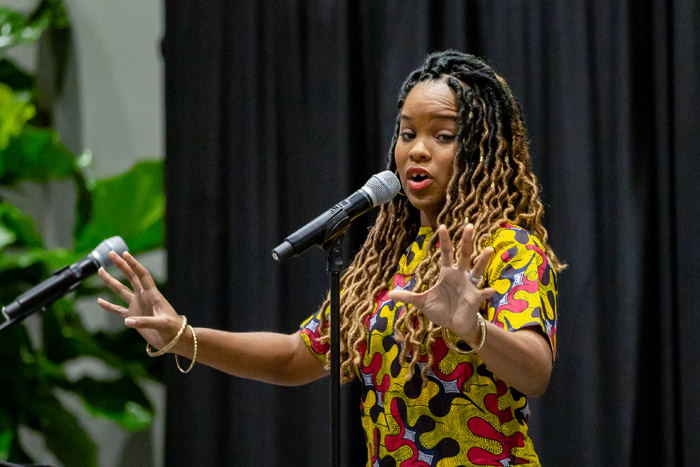 “The MLK Dream Week continues to serve as a step in the right direction to accomplish Dr. King’s dream,” said Bruce August Jr., the Multicultural Center’s assistant director for programs and marketing. “It is only right to reinvigorate our commitment to diversity and inclusion via the celebration of Dr. King.”

A highlight of Dream Week was the annual Dr. Martin Luther King Jr. Celebration Breakfast at the Davidson-Gundy Alumni Center.

Guest speaker former Rep. Helen Giddings, who retired after more than 25 years in the Texas House of Representatives and who was chair of the Texas Legislative Black Caucus, challenged students to carry the torch of King’s moral courage in helping the country attain equality and social justice. In her role as a legislator, Giddings helped secure state funding for the University’s Academic Bridge Program, which has helped 800 high-potential students from Dallas-area urban high schools succeed at UT Dallas.

The 20th annual breakfast featured a performance of “Amazing Grace” by Matthew Winser-Johns, assistant director for LGBT+ programs in the Galerstein Gender Center.  The event was co-sponsored by the Multicultural Center, Student Union & Activities Advisory Board and the Office of Diversity and Community Engagement.

“When you come together and organize, and you walk together in unity, it puts his words to action. It keeps his legacy alive.”

Dream Week also included Diversity Dialogues, a facilitated cultural discussion, and a new event — the first campus Unity Walk in honor of the legacy and values of King. Though inclement weather forced the event to be held inside the Student Union, students heard speakers and joined in songs from the civil rights era.

Software engineering senior Gerry Bogonko, vice president of the Black Student Alliance and a multicultural peer advocate, spoke at the event and outlined the history of voting rights activism. He said he believed it was important for students to continue to gather and commemorate the memory of King.

“When you come together and organize, and you walk together in unity, it puts his words to action. It keeps his legacy alive,” Bogonko said. “By coming together, you can stop an oppressive power structure. It’s only by coming together that it will happen.”

Economics junior and Eugene McDermott Scholar Bethany Kasprzyk participated in the Day of Service event, helping to package meals in the Galaxy Rooms of the Student Union. She became interested in helping the needy after volunteering with the University’s Comet Cupboard, which addresses food insecurity for college students, and taking a class on poverty.

“Not only are children the group most likely to be in poverty, but their early childhood education is the biggest determinant of their adult outcomes,” Kasprzyk said. “I’m really glad Feeding Children Everywhere is tackling this issue. It’s the perfect service event for UTD to give back to the Dallas community in honor of Dr. Martin Luther King Jr.”