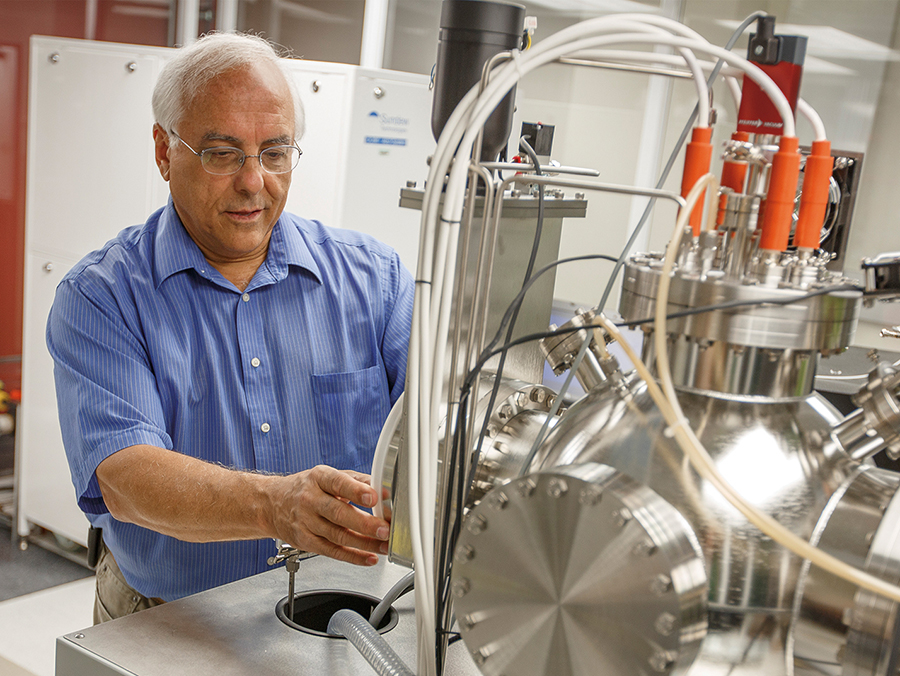 Dr. Orlando Auciello, a professor in the Erik Jonsson School of Engineering and Computer Science, helped develop a way to protect microchips from saline in the human eye.

A device created by an interdisciplinary group of researchers, including a UT Dallas professor, was recently named one of the best inventions of 2013 by Time magazine.

The Argus II Retinal Prosthesis System restores partial vision to people blind from eye diseases such as retinitis pigmentosa and macular degeneration. It earned recognition as one of the 25 Best Inventions of the Year 2013 in the Nov. 25 edition of Time. It is one of five inventions featured in the accompanying video available on the magazine’s website.

The device was developed by a group of researchers from five national laboratories, four universities and Second Sight Medical Products. Dr. Orlando Auciello, an endowed chair professor of materials science and engineering and bioengineering in the Erik Jonsson School of Engineering and Computer Science, was part of the team from Argonne National Laboratory that worked on the device.

While at Argonne, Auciello worked on the fundamental and applied research to develop a special coating now known as ultrananocrystalline diamond (UNCD) film that protects the silicon microchip from being attacked by the saline in the eye. Without the layer of protection, the saline would destroy the microchip.

“I have written 450 to 500 papers – none of those papers mean as much as talking to a person who tells you, ‘Oh I can see this shape, I can see this light.’”

“The big problem is that you cannot put a silicon chip inside the eyes just as it is because it will be attacked by the saline solution in the eyes,” Auciello said. “My participation in Argus II was to develop the UNCD film as a unique biocompatible coating to encapsulate the silicon chip and protect it from the attack by the saline solution. My team developed it, and it works beautifully.”

The silicon microchip has been incorporated into the Argus II device, which currently includes a camera mounted in eyeglasses that captures images and transmits them as electronic signals to the UNCD-coated microchip located on the eye. The microchip is connected to an array of electrodes via platinum wires that sends the images to the brain for recognition. Auciello also contributed to developing materials that help the microchip process the electronic signals.

“This technology is the result of incremental research conducted before all the potential benefits were fully known,” Auciello said. “This was a big interdisciplinary program involving physicists, materials scientists, electronic engineers, biologists, medical doctors and surgeons."

It took Auciello 10 years at Argonne National Laboratory to conduct the fundamental and applied research to develop, characterize and test the UNCD films. It took another 12 years, as well as the company he co-founded called Advanced Diamond Technologies (ADT), to make the equipment to produce UNCD on an economically feasible scale.

The Argus II was approved in Europe in 2011. The first commercial implantation was done in Italy in October 2011, and the device received FDA approval this year. The microchip is outside the eye and connected to the eye with tiny wires covered with polymers. Future refinements will lead to the Argus II becoming completely wireless by implanting the chip inside the eye, for which the UNCD coating is necessary, and receiving the images via wireless communication from the camera on the glasses.

“I have written 450 to 500 papers – none of those papers mean as much as talking to a person who tells you, ‘Oh I can see this shape, I can see this light,’” said Auciello, who is also the president of the Materials Research Society, the largest international organization of materials researchers from academia, industry and government.