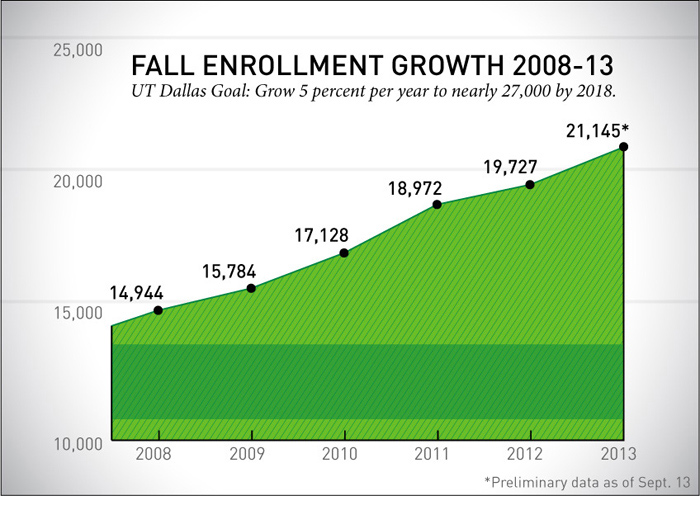 Enrollment has grown 45 percent since 2005. For more information about preliminary enrollment figures, read "President Champions Growth With Commitment to Excellence."

Student enrollment has grown more than 7 percent since fall 2012, thanks to the largest freshman class in UT Dallas’ history, according to Census Day figures.

The preliminary enrollment tally of 21,145 shows a record 2,231 new freshmen – a 44 percent increase since last year. Students new to campus also include 1,764 transfers and 2,400 graduate students.

“We are pleased to see this continued remarkable growth in the student body, which indicates that we are following the intentions of our strategic plan,” said President David E. Daniel. “A steady enrollment growth is a key goal in establishing UT Dallas among the nation’s leading research universities.”

OTHER FIGURES FOR FALL 2013

U.S. News Ranks UT Dallas as One of Nation's Most Diverse Campuses

The freshman class, which has posted an average SAT score of 1261 – among the highest for Texas public universities – also brings the largest number of National Merit Scholars (88) in the University’s history, topping the 63 who arrived on campus in 2012. The scholars join 115 continuing National Merit winners, for a total of 203 on campus.

About 63 percent of the freshmen are in the STEM majors, led by biology, accounting and computer science. Nearly 80 percent of master’s students are concentrated in two schools: the Erik Jonsson School of Engineering and Computer Science and the Naveen Jindal School of Management.

“The fact that we could grow our enrollment dynamically shows that students are attracted to the rigorous menu of programs that the University offers,” Redlinger said.