At the annual Founders Day celebration, the campus community honored the three men who launched the research institute that became The University of Texas at Dallas.

Eugene McDermott, J. Erik Jonsson and Cecil H. Green,, also the founders of Texas Instruments Inc., created the Graduate Research Center of the Southwest, which joined the UT System in 1969. As the University celebrates its 50th anniversary, University President Richard C. Benson reflected on how far the fast-growing institution has come.

“Our campus has grown from a single building in the midst of an open field to one that, over a little more than a decade, has added almost 12 million square feet of new and renovated infrastructure from almost $1.5 billion in investments,” Benson said. “The progress that has been made at UT Dallas in its 50 years of existence owes much to our longtime partner and top collaborator – Texas Instruments.”

Texas Instruments announced a $5 million gift at the Oct. 29 event that will be used to create an endowment to support early career faculty members in the Department of Electrical and Computer Engineering in the Erik Jonsson School of Engineering and Computer Science.

“In another 50 years, I hope that this dynamic partnership is one that is still celebrated,” Benson said. “And I fully expect that the investment made today in strengthening our faculty and attracting the best students will benefit this university and the world beyond for generations to come.”

Founders Day marks the day in 1964 that the University dedicated the Founders Building. The celebration, held at the Davidson-Gundy Alumni Center, featured confetti cannons, a group photo of attendees wearing commemorative T-shirts, and the display of a time capsule that was installed during the Founders Building’s construction in 1963. The time capsule contained a small disk of a cesium isotope and a copy of the research center’s charter on microfilm. TI donated the first item for the next time capsule: a 300-millimeter wafer. 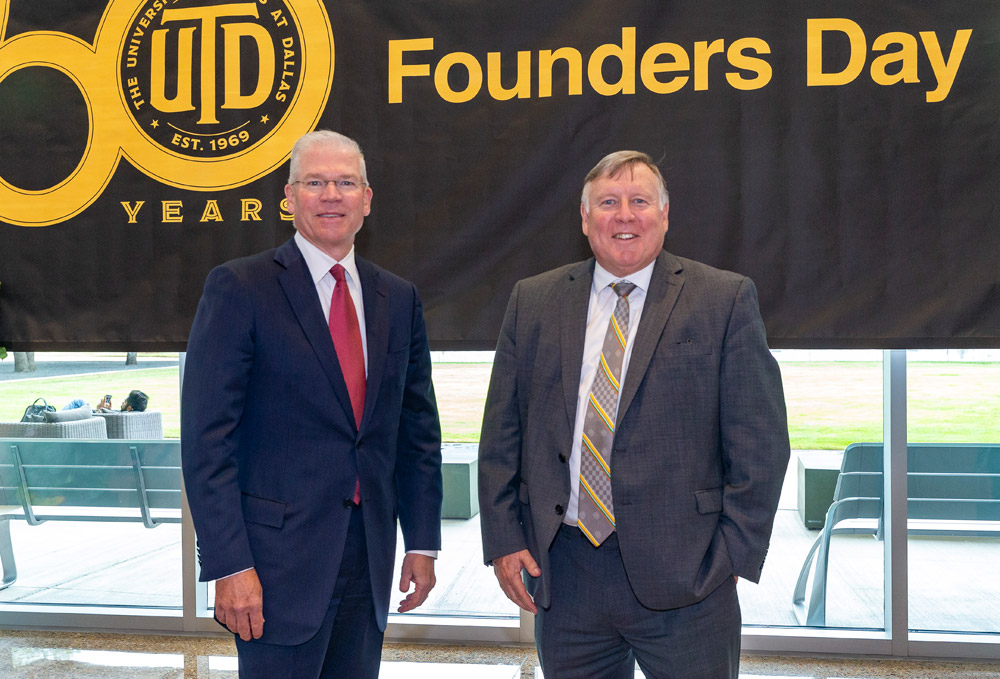