Fernanda Roman and Helena Vaquera came to the U.S. from Mexico with their families when they were young children. Their parents saw education as a priority but could provide no firsthand experience at navigating a college campus such as The University of Texas at Dallas. 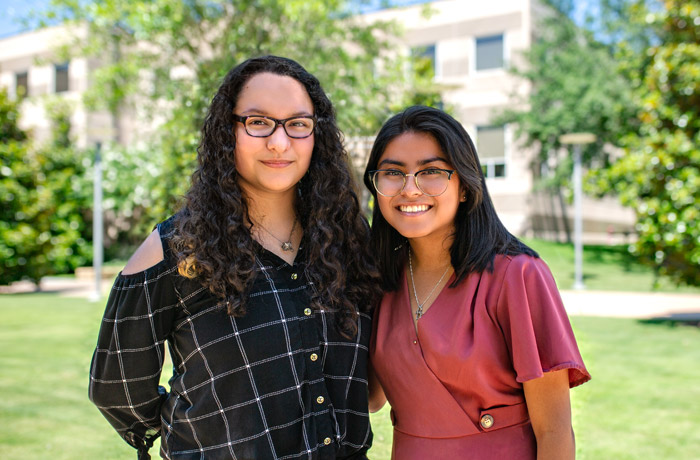 When they arrived on campus, Roman and Vaquera found their bearings through programs such as the First Generation Living Learning Community, where they became roommates, engaged with faculty and staff mentors, and found the resources they needed to do well in college.

“It’s been a great support for us. It really helps give us experiences that wouldn’t otherwise happen,” Vaquera said.

The experiences gave them the confidence to succeed academically and even land internships with the Consulate General of Mexico in Dallas. This fall, both will continue at UT Dallas, where Roman will be a political science sophomore and Vaquera a neuroscience senior.

Engaging first-generation college students like Roman and Vaquera and tracking their successful experiences are among the reasons why UT Dallas has been selected to be a member of the inaugural nationwide cohort of First Forward institutions.

The First Forward designation, an initiative of NASPA-Student Affairs Administrators in Higher Education and The Suder Foundation, recognizes higher education institutions that help improve experiences and advance outcomes of first-generation students. Participants are able to access professional development, community-building experiences and resources of the Center for First-generation Student Success.

“First Forward is an opportunity for UT Dallas to join an elite community of professionals prepared to share evidence-based practices and resources, troubleshoot challenges, generate knowledge and continue to advance the success of first-generation students across the country. We know UT Dallas will be a significant contributor.”

As a First Forward institution, UT Dallas will be able to engage with peer institutions that are also creating environments to improve the experiences and outcomes of first-generation students.

“First Forward is an opportunity for UT Dallas to join an elite community of professionals prepared to share evidence-based practices and resources, troubleshoot challenges, generate knowledge and continue to advance the success of first-generation students across the country,” said Dr. Kevin Kruger, NASPA president. “We know UT Dallas will be a significant contributor.”

For Roman, the youngest of nine children, getting such support made all the difference.

“I always liked studying. The others would make fun of me as the one who liked reading,” Roman said.

Her academic journey began at the Dallas Independent School District’s college-preparatory Irma Lerma Rangel Young Women’s Leadership School. Then she received advising, mentoring and tutoring the summer after she graduated through the Academic Bridge Program at UT Dallas, which helped her make the transition to college. As an Undergraduate Success Scholar, a program that helps underrepresented minority students achieve their academic goals, Roman learned time management and effective study skills.

When she participated in Moot Court as a pre-law student, Roman gained the research, analytical and advocacy skills she would need for a career in law. She hopes to one day work in international corporate law. She also wants to help mentor other incoming first-generation students.

Vaquera’s family moved to South Texas from Monterrey, Mexico, so she could get a better education. Through the Early College program at Johnny Economedes High School in Edinburg, Texas, she earned an associate’s degree while completing high school.

Her family is unable to provide financial support, but Vaquera found resources at UT Dallas that included a work-study job and a position in a research lab.

Though she now lives off campus, she and Roman are still “best friends.” Vaquera even stays with Roman’s family on some weekends.

Vaquera is confident she will complete her degree and continue her neuroscience research in graduate school. Her older sister graduated from UT Rio Grande Valley, and her twin is at Texas A&M University.

“Being away from home has been challenging, but it’s also been inspiring to see others like me who are doing well here,” Vaquera said.

Faculty, staff and alumni interested in participating in programming and advocacy efforts are invited to join the first-generation student support network.